About a third of my code is wrapped inside a Facade class. Note that this isn't a "God" class, but actually represents a single thing (called a Line). Naturally, it delegates responsibilities to the subsystem behind it.

What ends up happening is that two of the subsystem classes (Output and Timeline) have all of their methods duplicated in the Line class, which effectively makes Line both an Output and a Timeline. It seems to make sense to make Output and Timeline interfaces, so that the Line class can implement them both. At the same time, I'm worried about creating parallel class and interface structures.

You see, there are different types of lines AudioLine, VideoLine, which all use the same type of Timeline, but different types of Output (AudioOutput and VideoOutput, respectively). So that would mean that I'd have to create an AudioOutputInterface and VideoOutputInterface as well. So not only would I have to have parallel class hierarchy, but there would be a parallel interface hierarchy as well.

Is there any solution to this design flaw?

Here's an image of the basic structure (minus the Timeline class, though know that each Line has-a Timeline): 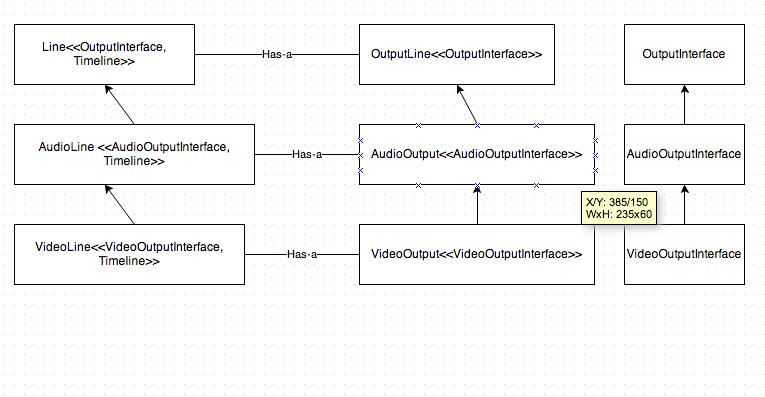 NOTE: I just realized that the word 'line' in Timeline might make is sound like is does a similar function as the Line class. They don't, just to clarify.

What ends up happening is that two of the subsystem classes (Output and Timeline) have all of their methods duplicated in the Line class, which effectively makes Line both an Output and a Timeline.

If you facade is doing lots of simple delegation (example, facade method doSomething simply calls another class' doSomething), you probably should refactor.

Are some of your clients interested chiefly in Line as a Timeline, and others interested in it chiefly as an Output? If so, consider sprouting classes or interfaces from Line that stand between it and clients, each of these new classes wraps a pointer to a Line and abstracts away implementation while focusing the API.

At first, the feels like a facade for a facade, but it opens up new refactoring horizons. You can pull methods from Line to the new classes. You may discover new helper classes you can extract. Perhaps one of your implementation classes will turn out to belong here as well.

That being said, it is certainly possible for a class to have the single responsibility of "providing a single facade delegating to several other classes to simplify client code". It sounds like that might be what you are describing; it depends whether Line has any behavior of it's own, besides delegation. I don't usually do this, because I don't find it cumbersome to have client code talk to several objects, but that may be chalked up to personal preference.

It seems to make sense to make Output and Timeline interfaces, so that the Line class can implement them both. At the same time, I'm worried about creating parallel class and interface structures.

What motivates you to do that? Is there some need for that change, or is it just that you think it would be "more right"? If the latter, I would just leave your code as is. Working code is king.

Not the answer you're looking for? Browse other questions tagged java design design-patterns object-oriented programming-practices or ask your own question.

14
Abstract Base Class with Interfaces as Behaviors?
2
Good design for class with similar constructors
4
Discovering functionality from parallel class hierarchy
9
Is implementing an interface defined in a subpackage an anti-pattern?
0
Multi inheritance in Java
3
Requirements for an hierarchy design in C++ for integer C types extension. Interface design problem
0
Designing a maintainable class hierarchy for representation of ASTs
3
Does it make sense to apply interface segregation to a facade?