Multiple meanings for one variable? [duplicate]

I'm replacing a guy who was in his first job as a programmer. You'd think being fresh out of school means the basics are fresh in one's mind, but think again.

The code base is horrible, Ctrl+C / Ctrl+V is apparent in lots of areas, about 60% of the logic is coded in forms and the rest is in a monstruous module called helpers. It hits the database in a If condition and re-hits the database with the exact same query inside the Else part. In general, it's as if declaring a variable had a higher cost than hitting the database or querying XML with an xPath.

Logic is scattered between stored procedures, table-valued functions (with an inexistent naming convention so you don't know if you're looking for a SP or a TVF) and inline SQL (string concatenations), and the seldom comment will just rephrase the code it's commenting.

Complex conditional logic is written in nested If blocks with a cyclomatic complexity that's just off the charts, in arrow-shaped procedures that can reach 1200 lines of code.

I can deal with all of the above... to a certain degree. But recently I came across something that just blew my mind.

The author was declaring a String variable with a meaningful name (call it smurfName), passed it to a table-valued function to get an integer value, and then used that integer value to determine another string value that gets used further down the process, here's a simplified illustration:

And it just keeps going.

Is reusing a variable (/giving it a new meaning) a common practice or it's just another "WTF" in that code base I'm stuck with? Is there any valid reason for doing that? If not, then what drives a programmer to work like this? I'm a self-taught programmer, maybe this guy knows things that I don't (I didn't know about xPaths until I saw them in that code base), but when I tried understanding the meaning of that variable, this picture came to my mind: 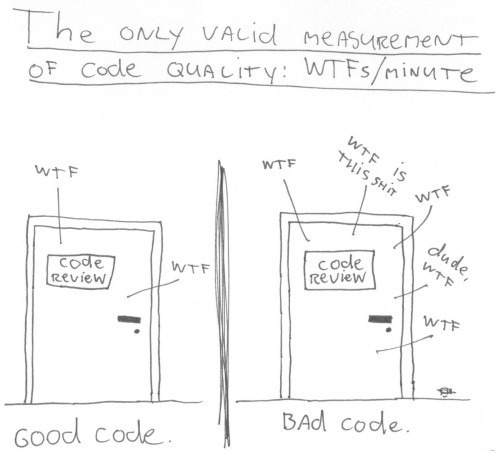 Browse other questions tagged variables visual-basic-6 or ask your own question.

62
Should I reuse variables?

2
Semantic or structure - which should get preference for variable naming?
2
"Is" prefix and "On" suffix as reasonable exceptions to a "non-hungarian" naming standard?
24
What is the reason for using lowercase for the first word in a local variable (eg, employeeCount, firstName)
3
Best practices for scientific variable naming?
0
Variable can't hold str() method information with "pure" word in brackets... why?
3
Avoiding variables/functions only referenced once
3
Standard Variable nomenclature
3
When doing multiple operations on a variable, is it considered bad practice to reuse the same variable name?
0
Is there a reason why you shouldn't use 'integration variables'?