Importance of diffing and merging for design specifications documentation

The context of this question is choosing tools for writing design specifications for software projects.

These documents will be written and maintained by architects and developers, I'm not talking about marketing requirements. Some of them may be shared outside the team, but only in a processed, non-editable form (PDF, all the docs are assumed being able to be exported to this format).

These are architecture documents, describing the structure of code components, implementation methods, protocols, data formats, etc. They take the form of text with diagrams and identifier names and the occasional code snippets, this isn't about API documentation that might be generated from source files.

The docs will be under source control, fortunately nobody here needs to be educated about that. It's inevitable that versioning will arise over time: we do maintain old versions of the software. Issue tracking might not be adhered to as strictly for documentation as for code.

How important is it to be able to easily compare and merge such documents? We have diverging opinions in the team, ranging from “nobody ever merges documentation and if needed Word has a merge tool” to “merging is crucial and git merge must work”. Note “Word has a merge tool” is something that I quote but don't agree with, having had the painful experience of merging two bugfixes that I had made to two copies of the same document

I have a vague memory of a rule in some company (Google, perhaps, since it's so often cited) that “if you can't merge it, it doesn't exist”, but I'm unable to find it now.

I'm looking for either well-reasoned arguments, or authoritative-looking (and preferably motivated) citations.

For discussion in your case, it is important to take into account that diff feature is already available in your "setup" (more on that below).

Consider re-focusing discussion regarding diffs to how easy you need it to be, or more precisely, do you need "extra" usability features provided by diff tools targeted at working with code (more on that below).

Diff capability is there due to the fact that all the docs are assumed being able to be exported to PDF. Thing is, there are tools 1, 2 capable to produce PDF diffs.

In my experience, working with PDF diffs was pretty much close to regular code diffs, in the sense that one can refer, describe and discuss these in a meaningful way. "In 7th diff at page 654, word foo should be replaced with bar". Reviewing some 200-300 diffs in 2-3 files as a matter of 2-3 hours has been perfectly doable this way.

The question you should ask here is, again, how easy you need it to be? Does anticipated usage of doc diff involve scenarios where code review tools offer substantial benefit over PDF diffs?

Say, having 2-3 "rounds" review of 1000 diffs in 100 files in a day is perfectly sensible with a decent code review tool, but I can not even imagine this to be done with PDF diffs, as there is unlikely a demand in a tool capable of that, given typical PDF usage.

For your particular case, I'd say it doesn't matter that much for the following reasons:

As an alternative solution, consider generating an additional redline document that highlights the changes between versions. Despite it's many frustrations, MS Word provides change tracking capabilities and can track changes from multiple users within a document. To keep your main line document branch clean, you could create a separate branch for redline documents.

Here are some contraindications that would make me change my answer to "yes, it matters incredibly!"

To answer you question properly, we first have to assess whether easily could ever be used to describe the process of comparing and merging of documents.

Documents are not code. There are many obvious differences between merging code and merging documents, but some subtle ones also: if a mistake is made when merging code there are many automated ways of detecting this, ranging from compiler errors to formal unit-testing. Conversely, with documents, a visual inspection will almost always be required; just because document parts don’t appear to conflict, (and still conform to DITA rules in this scenario) there is no guarantee that a change in a title (or even the way it is rendered) in one part of the document can leave another part redundant or invalid.

The above is an excerpt from a recent blog post by myself:

N-Way merging was considered because documents have narrative content. As such, they are often edited and reviewed in a more ad-hoc way to code that has a very strict structure (so far as a compiler or interpreter is concerned).

My view after working on a solution for this problem is that this kind of merge is unlikely ever to be 'easy' but it is certainly possible to make it manageable.

To help illustrate some of the challenges, here is one view of a prototype web app (the one used for the blog) for exploring review methods for an N-Way document merge: 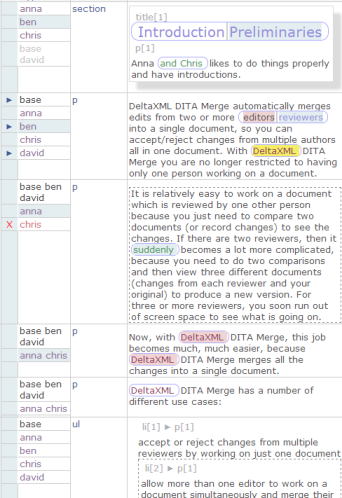 Not the answer you're looking for? Browse other questions tagged documentation comparison configuration-management merging or ask your own question.

4
What could be some pitfalls in introducing a style guide and documentation generating software in a development team?
11
Is iterative documentation development possible, and does it deliver effective documentation?
11
Determining the right amount of documentation
6
How do you track existing requirements over time?
3
Handling Difficult Distributed Version Control System Merges With Pair Programming
5
Should I include necessary additional changes in a merge commit?
3
Avoid or minimize merge conflicts while using NuGet and GitFlow
2
How do I write, review and coach better English language in documentation?