Activity diagram, can merge node have more than 1 output?

There is a simple system, that allows users to do 4 things: ADD, EDIT, DELETE, PRINT data.

I am due to model it (I'm entirely new to UML activity diagrams) and from notation, I dont understand whether a decision node can have more than 3 inputs? It should be, otherwise how would I do that.

Anyway, the user can perform the action and do it again, so there is a loop needed. But the merge node is said to have only one output, which would not be the case. The picture should be clear what I mean. 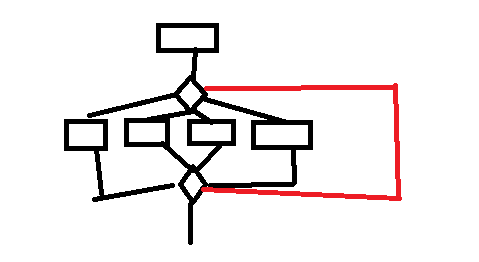 For example, at the top decision point of your diagram you would have a merge node to merge in the flows from the previous activity, and the repeat loop. This would have one output, to a decision node which then branches into the 4 different activities.

You could then have something similar at the bottom decision point: a merge node to merge in the 4 activites, which is followed by a decision node ([repeat] / [finished]) that branches (a) to the next part of the diagram and (b) to the repeat loop.

Then again, if you don't need to stick to strict UML, it might look cleaner if you bend the rules, as per RushPL's answer.

I am in no way an expert on UML but during my work I often work with UML-alike diagrams and generally I find it works best not to strictly adhere to UML limitations but simply try visualize "what you mean". Unless of course these are your requirements. Is the below what you mean? (generated by code2flow)