Given the following relational model: 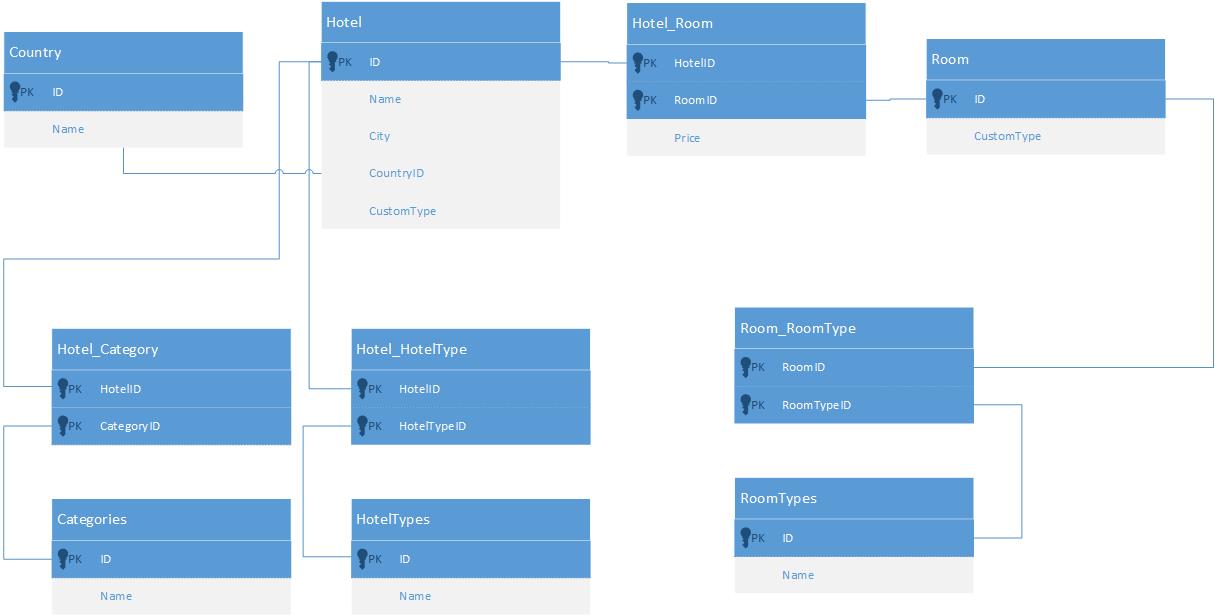 I need to implement a typed search for hotels, which should be able to query on name, city, country, category, hoteltype, roomprice, customtype, room custom type and roomtype or any combination of these criteria.

At the moment I'm doing this though Entity Framework, dynamically constructing a query over the Hotel-entity (IQueryable). This is fine as currently there is very little data. However, this isn't very scalable and when there is a lot of data this will become very slow as it's a query over 10 tables. Note that I only need to load the hotel-data, not the entire graph.

I'm thinking of ways to improve the scalability of this part. I have been looking into CQRS and maybe NoSQL solutions.

One approach I had in mind is having this model on the write side (to enforce consistency) and having a different model on the read side. On write, I would then update the read-model (viewmodel).

However, since this is already a more or less complex model in terms of relations, I see a few problems with that:

To summarize a few questions:

First off, if that's your actual schema, it appears to be over-normalized.

are all candidates for being merged together by the pairing. So instead of 8 tables you would have 4. The double prefix on some of your tables is a hint that the normalization has been taken too far.

Practical or pragmatic normalization is always a balancing act. In this case, I think you've gone too far down the normalization route.

Next up, performance on the relational DB side:

I need to implement a typed search for hotels, which should be able to query on name, city, country, category, hoteltype, roomprice, customtype, room custom type and roomtype or any combination of these criteria.

Apologies if this sounds pedantic, but you do have indexes in place for all of those elements, right? If sharding is the secret sauce of web scale1, indexes are a critical first step in making sure your relational DB can scale.
1 The phrase is from a viral video parodying certain reasons in selecting database. Just google the term, but know that it's an NSFW video.

After that, we need to look at write models & read models.

With as small as this schema is, I think that approach is overkill, especially if you don't de-normalize the schema you provided in the question. Taking this route is just adding gasoline to an already hot fire - all that you'll have accomplished is bringing your application down more quickly due to the complexity.

That's not to say read-only views wouldn't be worth considering after you reduce the schema. Thinking through the ways people are likely to query for rooms, you can build views by location + name, location + price, location + type, etc...

Ideally, you'll have metrics from existing use to drive which views you should build. But it sounds like you understand the domain well enough that you can take a reasonable guess at which ones to start with.

Finally, consider a noSQL approach. And there's a reason why I bring it up last.

If you don't attempt any of the above first, your noSQL implementation will perform significantly worse than your existing relational DB solution. The biggest challenge will be the number of joins that you have in your queries. While you aren't likely to have a lot of complex joins, noSQL systems run best with little to no joins in the queries.

If you reduce your schema as suggested in the first segment, then you may have a decent chance at migrating to noSQL. I would probably collapse Hotel, Country, Room, and Room_Type into one table though. That would leave simple joins from there against Hotel_Category and Hotel_Type, but I'm assuming that those two tables are used less often when finding rooms.

Along with collapsing the schema, you'll need to index against the major elements that you want to search against. Perhaps even more so than relational DBs, the noSQL approach relies heavily upon the prebuilt index in order to find the information you need quickly.

As far as which would be faster (relational vs. noSQL), I really don't know and I don't think anyone could know until you've spent some time building and tuning both. Work on one doesn't apply to the other, so you have to double your effort in order to truly answer that part of your question. If you're already invested on the relational side, I don't see anything compelling within your question to switch to noSQL.

Fuzzy search can be a challenge regardless of underlying database type. The best thing you can do here is look at the options provided by the platform you pick and start trying to implement fuzzy search. Profile that; keep revising; and see where your iterations take you.

Have a look at Solr. It can do all the things that you want and much more, out of the box. One possible downside is that you have to push your data into the server every time you have an update (or do it in batches at specific intervals) but since Solr supports delta imports, it shouldn't be that much of a hassle.

If your complex queries are always based on Hotel Rooms, I'd say that you need in order to escalate is to denormalize (or otherwise build an index).

If you denormalize on SQL, I'd go for an OLAP approach. A simple denormalized, indexed table seems should be enough to escalate to millions of rows.

NoSQL (ie MongoDB) can also be used for this. The design principle is similar to an OLAP approach, but backed by a NoSQL database.

In any case, I'd suggest to use such an OLAP/denormalized backend only for the indexed search part, while maintaining your SQL structure for the transactional processing part (exactly as you mention, using a "read-model").

You can use a search engine like Solr (or Lucene in your case) as suggested, which can perhaps be seen as a way of denormalizing too. I tend to dislike this approach when I don't need fuzzy/score-based/text-based search. Depending on which kind of fuzzy search you need, you can avoid Lucene and resolve fuzzy search with a custom (ie using string-distance algorithms). As a concrete example: I'd consider a seach engine like Lucene if I need to do fuzzy search based on "City" or other text fields, but I'd perhaps go with something custom based on "Levenshtein distance" if I only need to do simple fuzzy searches on "Country". If you, however, need score-based search (like: some room attribute is not really important and doesn't disqualify the room from being listed) then go with some search engine like Lucene.

Finally, note that when querying your database the number of tables is not really a big concern as long as you are using indexed columns to join tables and their cardinality is not too big (ie, a "country" table can be contained in memory, and joining it on its primary key doesn't normally impact performance). Such joins are very common in Relational-OLAP systems.

What I have done for complex queries over large datasets is this:

This is a scalable solution to your problem. Once you start joining many tables with millions of records, you multiply the size of your temporary table used in the join. By truncating the results to a manageable amount, the queries will still run quickly, and in a majority of cases, you will get 100% of the results. In the case where your truncate removes valid hotels, you will find that you'll still get tens of thousands of results. It's a matter of being okay with not getting a perfectly complete solution in order to get results in a timely manner.

As far as fuzzy searching goes, you may be talking about Semantic Web implementations. This is a difficult task, but your refined results may well be superior to another competing site. Take a look into Gate for an idea (it's Java). Essentially, it generates annotations on text blocks that will let you do additional term searches. Once you add stemming and a comprehensive ontology to your annotator, it becomes a very powerful search tool.

I haven't tried switching to NoSQL. I find relational models have more tools and more developers that are comfortable with them. Flattening and distributing data isn't always the best choice, but if you have 10+ systems that can participate in a distributed data model, you may find the searches running faster. That's only if you have the resources to make this happen. Certainly flattening the database with a single server as the data source would be a mistake.

Not the answer you're looking for? Browse other questions tagged database-design nosql cqrs or ask your own question.

13
How much does the data model affect scalability and performance in so called "NoSQL" database?
3
Are NoSQL databases the best choice for more efficiently querying large amounts of data?
13
When to use a nosql database such as mongodb over mysql?
8
CQRS: How to restore read model
0
CQRS, What reasons cause read model update delay? How to prevent user from taking inconsistence data?
5
Achieving scalability and ACID with a RDBMS to NoSQL streaming solution
6
CQRS-Event Sourcing: how to process events in the expected order inside the read model
0
Query authorization in read model for listing items in DDD/CQRS