How do you handle supporting Chrome versions?

I'm working on a site for my company which, up until a certain point, was an Internet Explorer-only site for various reasons, mainly that when the site was originally conceived IE had a 90%+ market share so the work to get it working in other browsers just didn't make sense.

Now that we live in a more diverse browser economy we're doing the work to get the site working everywhere, and as luck would have it a decent chunk of it just happens to already work.

However, one issue we're struggling with is the issue of what to support and what not to support. For starters, non-IE browsers release much more frequently than IE did, and you don't know which versions are still in the wild. There's been basically three versions of IE released in the last decade, and IE6 is still supported until 2014. But there's an update for Firefox every other day, Apple updates Safari more or less annually. And then there's Chrome.

With IE we've had the situation arise where we have to support an old version because the IT department of the company in question does not allow the employees to upgrade. With non-IE browsers I'm thinking we'll adopt the line of "update to the latest or we can't help you" but I'm not sure how effective that is.

Also, my company does some amount of artificial limitations. For example we have a product aimed at companies so we don't support "Home" versions of Windows (i.e., XP Home, 7 Home Premium) even though there's no technical reason we couldn't.

When my company starts asking "what version or versions of Chrome do we support", how should I answer?

Chrome's new version adoption rate is really fast because of their automatic upgrade. Way faster than IE and even quite a bit faster than Firefox. Generally, if you are supporting the latest stable build of Chrome, you should be fine. It is literally only a matter of days or weeks before a new stable version almost totally replaces the old. 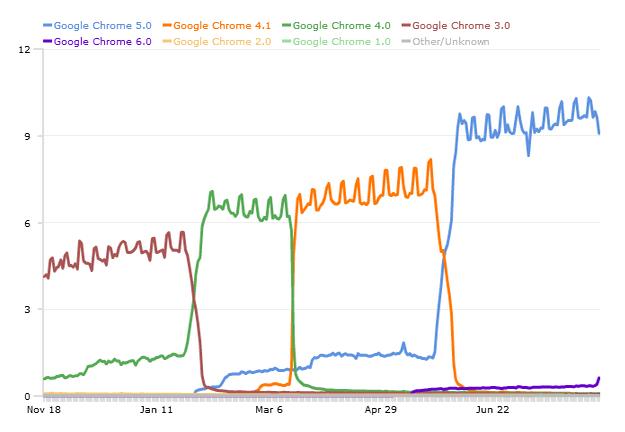 Chrome, Safari, and others use WebKit as the core (see http://en.wikipedia.org/wiki/WebKit#Usage ). What this means is that making things look good in Chrome will make it render the same in all those other browsers. Firefox uses another rendering engine. Bottom line is that they are all standards compliant browsers. Even IE has been stepping up to the plate with IE 8 and now IE 9. Standards compliance means it's a whole lot easier to make things look the same and behave the same across all the browsers.

The good news is that a bunch of people have done a lot of work to build cross-browser capable CSS and Javascript. If you use these frameworks, you stand a good chance of not having to worry too much about cross-browser issues.

The shortlist of CSS frameworks:

The shortlist of Javascript frameworks:

Newer versions of browsers make more of the current HTML/Javascript/CSS standards work. As long as you stay away from the cutting edge stuff, you will have no problems. HTML 4 and CSS 2 have the most support. If you use something from the newer standards (like HTML 5, currently in development or CSS 3), then provide fallbacks to the known standards. In short if you put the fallback in your CSS first, and the enhanced look second, the browsers that support that CSS setting will use it and the ones that don't will use the fallback.

Say you support web standards X: HTML 4, CSS 2, etc. instead of saying you support specific versions of a browser.

This is just my personal opinion as one who has been developing websites for some time, but I feel that the best you can reasonably hope to do (depending on time or budget constraints, of course) is aim to accommodate all of the most recent public browser builds. Despite Chrome's rapid update schedule, the rendering and interpretation stays pretty consistent thanks to the Webkit engine which powers by both Chrome and Safari.

Don't worry about supporting non-public releases of browsers, they aren't official for a reason and developing against them is likely to cause more pain than good in the long run.

The thing about Microsoft's browsers is that IE6 was largely broken in terms of web standards and general quality. Getting to version 9 has been like turning a cruise liner round and each major version has been a significant change to get there.

Chrome has had great standards support from day one. Chrome also has a different versioning model to IE. Its major versions aren't that drastically different from version to version compared with IE. From a day to day perspective users don't even notice they're using a different version.

This is pretty much true for Safari (which also uses Webkit) and Firefox. Be a bit more careful with Opera.

In a nutshell, most major none IE browsers won't cause you any problems. Focus resources on managing 4 different versions of IE!

The answer to the question is: we support the latest version

Not the answer you're looking for? Browse other questions tagged web-development google support or ask your own question.

6
Why can people expect hardware/software requirements on software applications, but it's not for web applications?
7
How should you approach supporting rapidly-updating web browsers?
3
Is it a bad practice to stop providing support for outdated software if updates are free and easy?
2
Should I force users to update an application?
1
Is blocking an entire web-client due to compatibility a reasonable request?
2
HTTP API Versioning and Need to Introduce Breaking Changes to All Supported Versions
3
Need help choosing/creating a workflow for web development
12
How to handle version number in code, across branches?
3
Solution to notify users Single Page Application (SPA) static resources have updated if users don't refresh their browsers