Should JavaScript and PHP objects be treated as different objects in an interaction diagram?

I'm drawing a communication diagram for an application where you can buy books. I'm using domain-driven design and have a 'shop' object, a 'cart' object, and a 'book' object.

My first communication diagram, for when the user first comes to the site, is straightforward. I generate all HTML (to show all books and an empty cart) back end with the help of PHP. I use an MVC pattern; so first I send a message to a 'controller' which creates a 'shop' with 'book's and an empty 'cart' before sending these to the view.

My second communication diagram is where I run into problem: It is about adding a book from the shop to the cart. I already have all the information I need to add the book to the 'cart' on the client side; since all book information is already in the shop. So when writing the communication diagram, should my first message, that is, AddBookToCart(bookId:int), be to a JavaScript object called 'shop' which gets the book info and send a message 'AddBookToCart(bookinfo:object) to 'cart' which in turn update the page?

I have never done communication diagrams with JavaScript in mind before, so I'm really confused about how to deal with the front end.

(I have been searching for over five hours, but I didn't find anything on this topic. It's like it's not even an issue to people. Am I viewing this problem completely wrong? Otherwise any resources, or even search terms to use to learn about how to model (and code) these kind of things would be much appreciated)

Given the uncertainty of my answer, I make it a community wiki. Feel free to edit it.

It depends on the abstraction level you use. One way is to be language-agnostic. Here's an example of a sequence diagram: 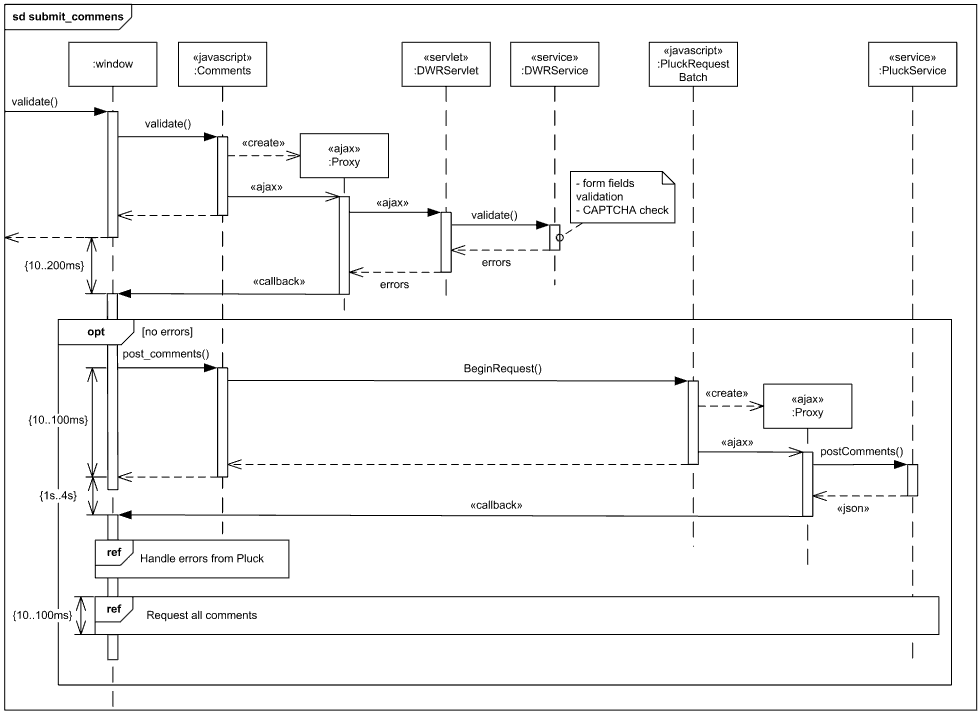 The major factor to take in account is what is the purpose of your communication diagram.

In practice, I've never seen communication diagrams so general that they would encompass for example both client and server-side. I don't think it's wrong to do such diagrams, but it's not a common practice.

Edit: I talked with a colleague more experienced than I in UML; his suggestion is to create two communication diagrams, one for JavaScript, another one for server-side. Mixing both would make the diagram more complicate than it needs to be, and some people may not understand which step is happening where.

So unless you are sure that having a single diagram would benefit you, stick with separate diagrams that you can put side by side for an overall view.

10
PHP, HTML, Javascript and writing good practices
3
can an object in a sequence diagram send a message call to the user?
1
Web Application: Combining View Layer Between PHP and Javascript-AJAX
4
Use case diagram and actor generalization: different use case diagrams for unlogged user and logged users
1
Representing multiple actions for sequence of objects on activity diagram
1
Trying to understand Sequence Diagram
2
In a sequence diagram, where do message parameters come from?
1
How to present my Actors and Objects inside Sequence diagram for an Online Management Exam system