I've written a application for Android licensed under GPLv3 which needs to use Google Play Services, a proprietary library, as a plugin to the app.

Now I'd also like to add libspotify as a plugin.

The user should then be free to disable all proprietary parts either at compile or runtime.

The GPLv3 has a section "7. Additional Terms." under which you can add a "classpath" exception. I'd like to use this exception to do the following.

The idea of a classpath exception is explained in the GPLv3 FAQ here:

The above interfaces are part of the project and are under GPL.

My intention is to make tight plugin hooks that all proprietary plugins must follow and a way to indicate to the user which plugins that we can remove at runtime.

Also, I want the "bridge" code, the implementation of the plugin interfaces to be open source and under a GPLv3 compatible license. And the source code must provide at least one GPLv3 implementation, hopefully creating a concrete wall between the GPLv3 and proprietary code. 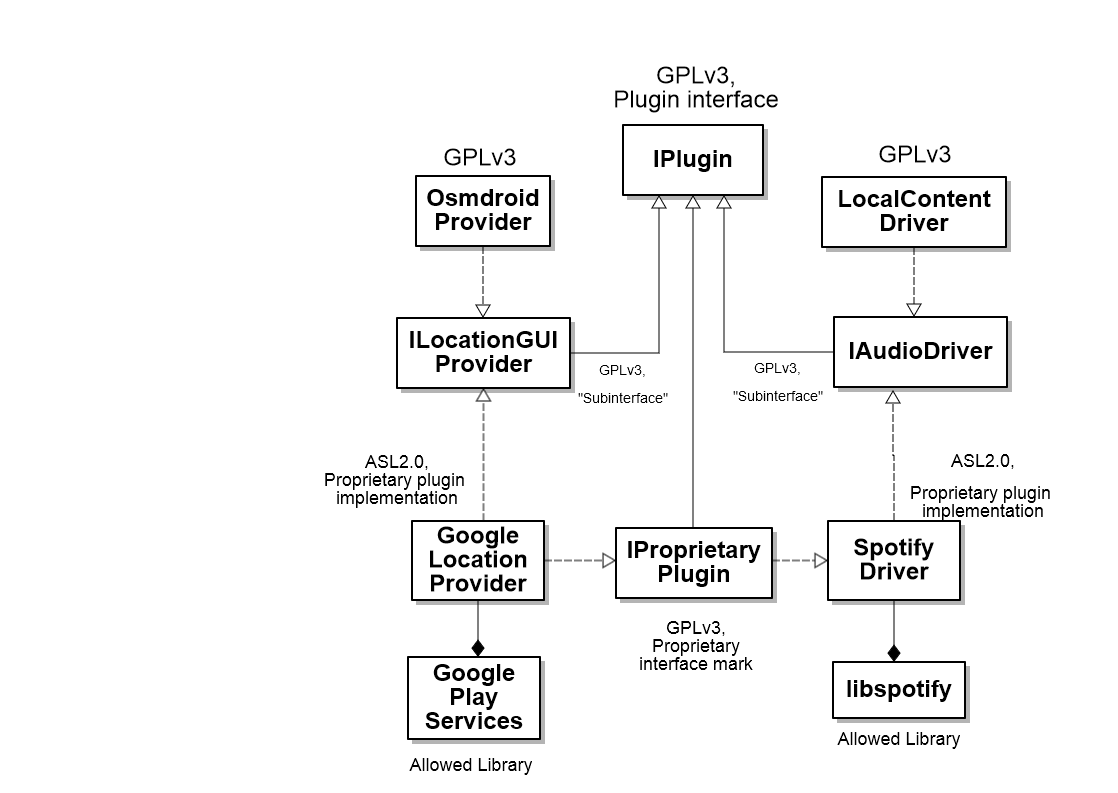 Is this possible to do? I know that most guys here are not lawyers, but I find asking developers first enlightening.

The guys at irc.gnu.org#gnu gave me the following suggestion: https://raw.github.com/qcad/qcad/master/gpl-3.0-exceptions.txt

Is "non-GPL compatible plug-ins and script add-ons" vague / a loophole, or is it clear and does it apply to my case?

I got a second suggestion at #gnu: http://roundcube.net/license/

What do you think about this one?

My attempt at a "classpath exception"

My first idea was to add the classpath-exception to Plugin with something like the following... does it accomplish my intent or is it filled with loopholes, etc.?

I don't think you can do what you are trying to do. And you would be well advised to contact the FSF or an attorney specializing in intellectual property.

If you look at the FSF FAQ on the GPL and Plugins, they have some relevant comments for your situation.

It depends on how the program invokes its plug-ins. If the program uses fork and exec to invoke plug-ins, then the plug-ins are separate programs, so the license for the main program makes no requirements for them.

If the program dynamically links plug-ins, and they make function calls to each other and share data structures, we believe they form a single program, which must be treated as an extension of both the main program and the plug-ins. This means the plug-ins must be released under the GPL or a GPL-compatible free software license, and that the terms of the GPL must be followed when those plug-ins are distributed.

If the program dynamically links plug-ins, but the communication between them is limited to invoking the ‘main’ function of the plug-in with some options and waiting for it to return, that is a borderline case.

I don't think your program is going to fall into the first case of using fork or exec. If it did, then you wouldn't have any issues. It's more likely that your program falls into the third category with dynamic linking. But it's not a good sign when the FSF tells you that you're in a gray zone. When it comes to the GPL and the copyleft, you want clear-cut answers.

The key for FSF's determination seems to be this phrase:

If the program dynamically links plug-ins, and they make function calls to each other and share data structures ...

which is repeated in another FAQ answer. If I had to guess, I suspect your program is going to share data structures and the two components (your application plus the plugin) will be making function calls to each other. And it that's the case, then you're squarely within their second example and the plugins will need to be licensed as GPL or a GPL-compatible license.

Not the answer you're looking for? Browse other questions tagged java android gpl plugins proprietary or ask your own question.

2
using / linking to MS-PL licensed code from (A)GPLv3
6
Is there a GPL-compatible software license for libraries which allows static linking, but requires redistribution of library source code?
90
What does "GPL with classpath exception" mean in practice?
45
Is Java free/open source or not?
2
Distributing GPL licensed software that optionally links to non-GPL licensed libraries
4
How and when had the CC BY license become GNU GPL-compatible?
0
Using GNU GPL with classpath exception licensed library in a GNU GPL licensed project
7
Do all transitive dependencies of GPL software have to be compatible with GPL?