Can someone explain the V Model process? Why is it different than the Waterfall model?

It seems the V Model is just the Waterfall Model with the bottom half of the Waterfall bent upwards to form a V. I don't see how it adds anything new.

From the diagrams, I also don't understand the flow. There are arrows pointing in all directions and I can't understand what comes first. Do we follow the V from the upper left, down to the bottom center then back up to the upper right? Or do we progress down the V doing everything higher before the item lower?

The internet is lacking a sufficient explanation of this model. It would be awesome if someone can explain it in true StackExchange form :) 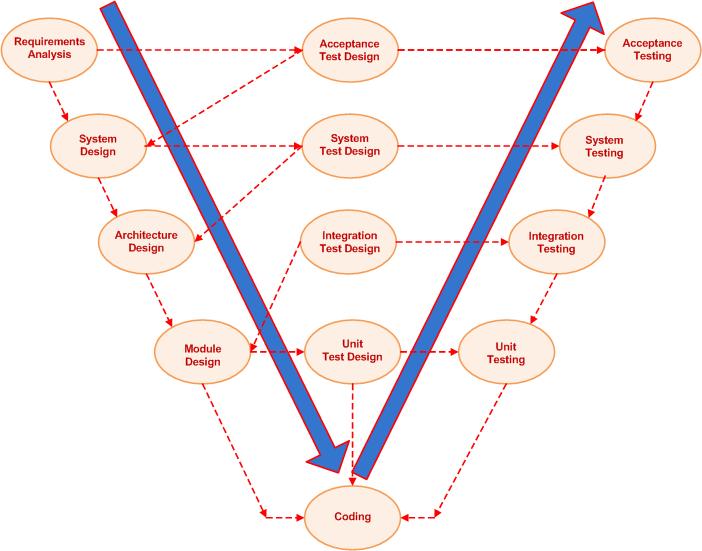 V-model is an extension of Waterfall model, so don't expect it to be hugely different.

The major differences with Waterfall are the way it is presented and the emphasis on testing.

Representing the flow as V-shape helps making the difference between everything which comes prior to coding (requirements, architecture and design) and everything which follows coding (essentially testing). While tests are just one of five steps in Waterfall, it looks like practically half of the process in V-model.

The diagram in your question is a bit more complicated. What it tries to show is that, for example, system design step leads not only to the system design document, like Waterfall model would suggest, but also the system tests design, which will later help writing system tests. The diagram just puts even more emphasis on testing. Finally, doing system test design helps in architecture design (it would be awkward to do architecture design regardless system test design).

Searching what other explanations on the internet, I can't avoid quoting the following article by Bhakti Satalkar:

This explanation is misleading. It would be true only if you replace “V-model” in the quote by any Agile method.

Unlike the article states, in V-model, testing is done after the coding; for example, see Wikipedia:

a common practical criticism of the V-Model is that it leads to testing being squeezed into tight windows at the end of development when earlier stages have overrun but the implementation date remains fixed.

While, in V-model, system test design follows system design without waiting until product implementation is done, this doesn't mean that tests themselves are performed before coding. The author confounds V-model with Agile approaches like Test Driven Development (TDD) in Extreme Programming (XP).

Not the answer you're looking for? Browse other questions tagged development-process model waterfall engineering or ask your own question.

4
Isn't the Spiral Model/Agile Development essentially just a more rapid and compressed Waterfall Model?
4
Is there a process model similar to the waterfall process, but with more cycles?
7
What is the difference between waterfall model with iterations and evolutionary software development model?
1
How can you predict the time it will take for two processes in two different machines in a cluster to communicate?
4
Why is the Document Object Model the view?
0
Can someone explain the Model in ASP.NET MVC?
4
Can a system be implemented with a waterfall process and then be implemented using a phased approach into a organisation?