Is this proper OO design for C++?

I recently took a software processes course and this is my first time attempting OO design on my own. I am trying to follow OO design principles and C++ conventions. I attempted and gave up on MVC for this application, but I am trying to "decouple" my classes such that they can be easily unit-tested and so that I can easily change the GUI library used and/or the target OS. At this time, I have finished designing classes but have not yet started implementing methods.

The function of the software is to log all packets sent and received, and display them on the screen (like WireShark, but for one local process only). The software accomplishes this by hooking the send() and recv() functions in winsock32.dll, or some other pair of analogous functions depending on what the intended Target is. The hooks add packets to SendPacketList/RecvPacketList. The GuiLogic class starts a thread which checks for new packets. When new packets are found, it utilizes the PacketFilter class to determine the formatting for the new packet, and then sends it to MainWindow, a native win32 window (with intent to later port to Qt).1 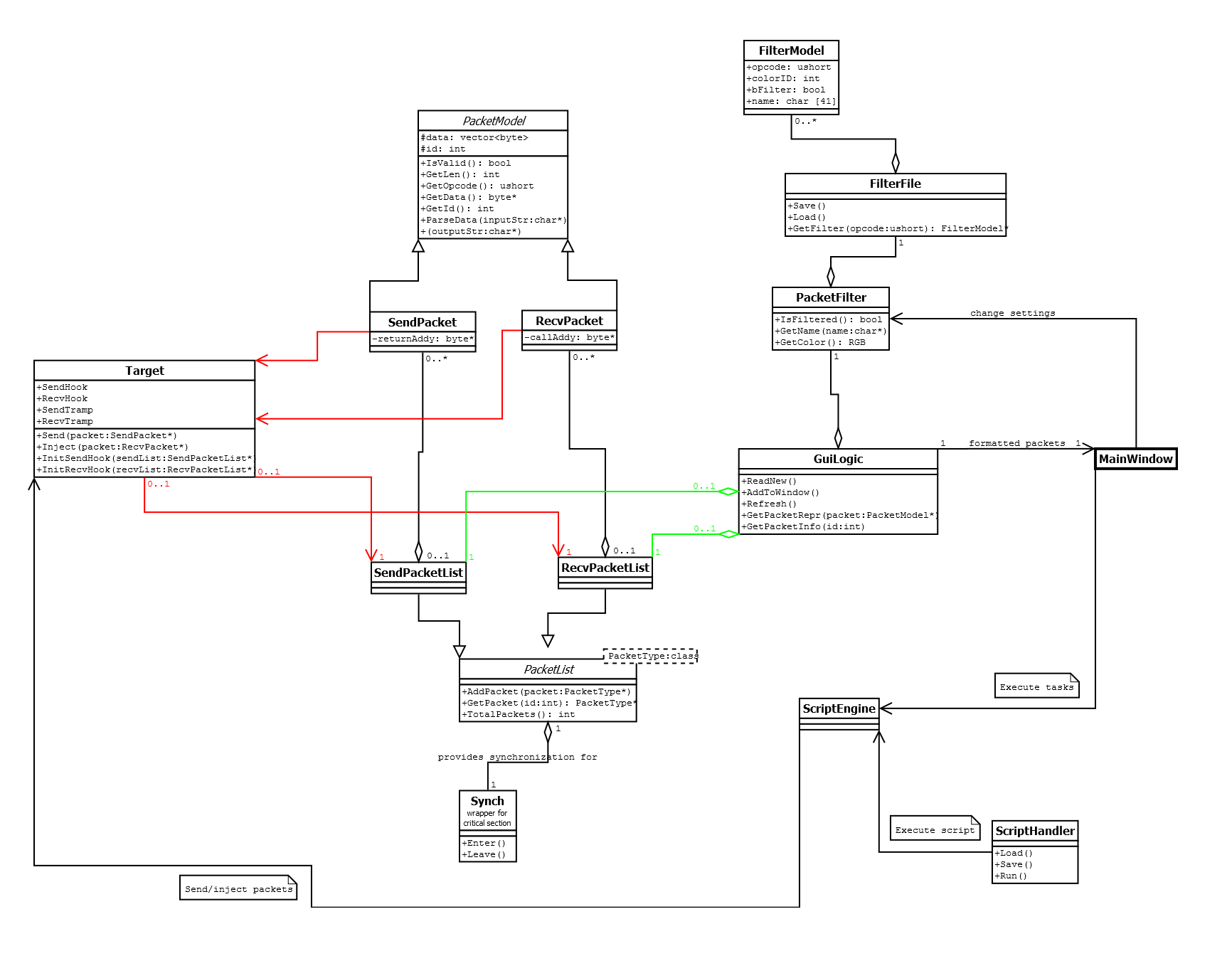 Here are my classes in skeleton/header form (this is my actual code):

I'm looking for a general review of my OO design, use of UML, and use of C++ features. I especially just want to know if I'm doing anything considerably wrong.

From what I've read, design review is on-topic for this site (and off-topic for the Code Review site).

Any sort of feedback is greatly appreciated. Thanks for reading this.

What is a SendPacket? How is it different to a RecvPacket? Surely sending and receiving are operations performed on packets, rather than types of packet?

For that matter, what is a PacketModel? It looks like a packet, unless there's some metadata I don't see. Is it supposed to store the byte contents of one packet, or somehow describe a type of packet?

If packets are the same type regardless of whether you're sending or receiving them, you only need one type of list to contain them.

What does Target mean? It's a really generic word - is it supposed to represent a network host/peer/IP address, or an IP+port, or some internal observer, or something else? In a comment you say it's a Socket - so why not just call it a Socket?

It isn't clear why you Send a SendPacket but Inject a RecvPacket. Where do you inject it? If it is supposed to be a received packet injected by the script engine, then Target is a mixture of an abstract socket - which is a source of incoming packets and a destination for outgoing packets - and some scripted mock socket. That seems like a potentially useful distinction.

Your current PacketList is your interface to the GUI, which presumably has its own thread, but you've made it impossible to use a good callback/signalling mechanism. The GUI has to either block or busy-wait calling GetPacket on each list sequentially. This is either inefficient, or guaranteed to be unresponsive, or possibly both.

It would be better to have a callback mechanism to the GUI, so an implementation can choose the best way to dispatch and synchronize events to the GUI thread on a given platform (although you need to work out how to manage the lifetime of these packet objects).

Why is your FilterModel coupled to the GUI - is because you're mainly using it to colour packets? This appears to prevent you discarding packets you're not interested in before passing them up to the GUI, which seems wasteful.

I'm not sure what all the addy stuff is supposed to accomplish - you could just expose a const ref to the underlying vector. That would be safer (unless you want to allow modification of received packet data), and cleaner. I'm also not sure what StringRepr is supposed to do - writing into an un-checked char*? Either pass a buffer size so you can check for overflow, or better implement a std::ostream& operator<< (std::ostream&, Packet const &) and let the stream worry about overflows and memory management.

5
Proper OO design for State and Command
4
Sanity of design for my in-memory object representations of database rows
7
Design guidelines for this scenario in C#?
3
Object-Oriented design and proper Java architecture for my program
4
Design question concerning proper and practical encapsulation
4
Proper design for models
1
Name for this design pattern?
1
is this a good design
5
Which design is better for this problem?
2
How correct this little game design without removing its design pattern?