Are patches a bad sign for the customer? [closed]

At the office we just got out of a long period where we released patches on a too-frequent basis. Near the end of that period we were doing almost three patches per week on average.

Beside that this was very demotivating for the developers, I was wondering what the customer would think about this. I asked the question myself and concluded that I never knew software that was updated that frequently. However, for the case that comes the closest I do not care really since the patches are pretty quickly applied.

The customers which received these patches differ a lot from each other. Some were really waiting for the patch where others did not really cared, yet they all got the same patches. The time to update the customers software is less than 30 seconds, so I do not expect any problems concerning time. They do need to be logged out though.

So my question in more detail: Is getting updates frequently giving a 'negative' message to the receiver?

Of course, I could ask the customers, but I'm not in that position nor do I want to 'Awaken the sleeping dogs'.

PS: If there is anything I could do to improve my question, please leave a comment. 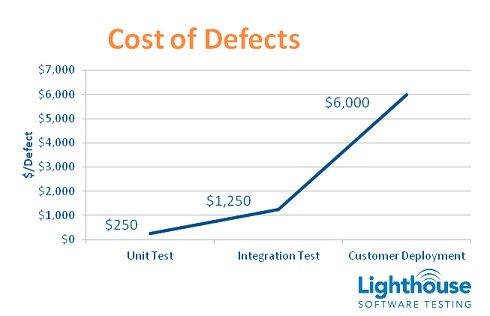 Testing software on your customers is by far the most expensive possible way to detect bugs, no matter what anyone says. It's a false economy; the free labor that you think you're getting is more than offset by customer service effort, breaking the software development life-cycle, and losing customer confidence.

I feel like releasing several patches in close proximity reflects poorly on the company. It always makes me feel like they didn't test throughly enough up front, that the developers are incompetent, or the management has no idea what they are doing.

That being said, the other side of the token is that releasing several patches close to one another shows that the company is taking a proactive approach to their product and is continuing to improve their product for the consumer.

I'm more inclined to feel that the former is the way most will look at it from a consumer's standpoint, but speaking directly with them will (obviously) be the best choice, but will also raise the issue within the customer base that they may not have been aware of initially.

More and more companies follow in Chrome's footsteps and have more and more frequent customer releases.

The pre-requisite for implementing short release cycles is a painless upgrade - in chrome, for example, the upgrade is done without user intervention at all on application start-up, and if the user keeps his application always on, he receives a minor flag advising him to restart the application at his convenient time, and the application then makes the effort to return him to his previous state after the restart.

This method leaves the customer happy, as he does not need to be aware of every update, and since feature releases come frequently, bug fix releases will be just as welcome.

If, on the other hand, patches come after glaring show-stopper bugs, and they come in clusters, since the earlier ones failed to fix the bug, or created a greater bug - rest assured your customers will smell it. This will definitely reflect poorly on the vendor's professional reputation, and lower the vendor's perceived software standards. Continuous delivery relies heavily on effective unit testing and integration testing to guarantee its success.

On the matter of not talking to your customers to 'let sleeping dogs lie', I believe this is a wrong strategy - customers are not blind, and they are no fools. I believe that good communication with your customers can only reassure them that they are your priority, and that you are receptive to their criticism. If you have delivered bad releases a couple of times, and you do not hear them complain - you should definitely be worried - it is not that they did not notice, more likely they are just to busy finding a replacement for you...

Patches specifically for customers that have detected a problem are obviously going to need to go out as soon as possible.

I have seen software at large companies then take the approach that other customers will get those patches as a service pack at regular scheduled intervals. Normally because the patches take some effort to install and test in the customer environment but in your case it could just be used to lessen the possible impact of the effect you are concerned about.

I have also seen people advocate putting patches up in repositories or on websites where customers can download and install the ones they want to. This can create problems with knowing what patches which customers have, so when they call in with a problem you have to determine exactly what code they are running, but with care that can be tracked. You can then force people to upgrade to one of the larger 'packs' when one is released that bundles up lots of patches.

The exception are security patches. A large Washington based software company has been known to get into hot water by waiting for the third Thursday of the month before releasing critical security patches and information about the hack has leaked out and forced their hand early to even greater embarrassment.

Google chrome gets around the issue by auto updating very frequently, they too require you to cycle the program (restart chrome, or in your case log out). They have now made that normal practice for browsers and people don't even think about it any more. But not everyone can be Google.

SaaS applications get around the whole issue by doing the updates in the background.

However, above all, unless you are doing continuous integration or updating with new user requested features very frequently, then I think we are still in a time when people expect you to have done a decent amount of testing before release. If you would be embarrassed to meet your customers and talk about the frequency of bug fixes, you are probably not doing enough testing. Did you release how much of a risk you were taking before you released the code. There is an argument for releasing very early buggy code as long as you know that is what it is, but I think you need to have a good understanding of your known quality, which means understanding and keeping under control your time to know quality.

Not the answer you're looking for? Browse other questions tagged customer-relations software-updates or ask your own question.

4
How to prevent the vicious circle of testing via customer

4
Have you ever had to sacrifice programmer integrity for customer satisfaction?
456
My customer wants me to record a video of how I develop his software product
5
What are your advice, methods, or practices to take out the most from a day on-site at a customer?
4
How to prevent the vicious circle of testing via customer
5
Do software patches ever modify an existing file or do they replace the whole thing?
0
Strategy & Architectural Decision: Customer data migration between two companies