Dealing with co-workers who do not have a consistent coding style?

What do you when you're working with someone who tends to write stylistically bad code? The code I'm talking about is usually technically correct, reasonably structured, and may even be algorithmically elegant, but it just looks ugly. We've got:

We have a good code review system where I work, so we do get to look over and fix the worst stuff. However, it feels really petty to send a code review that consists of 50 lines of "Add a space here. Spell 'itarator' correctly. Change this capitalization. etc."

How would you encourage this person to be more careful and consistent with these kinds of details?

Agree on a coding convention

I think you just have to keep doing what you are doing. Have a clear set of coding guidelines, and enforce them during code reviews. If a developer gets 50 or 100 lines of "Add a space here" and "Spell 'iterator' correctly" every time he tries to check something in, and he is actually not allowed to check in before all of those get fixed, eventually he'll have to start writing cleaner code just to avoid the hassle.

I think if you fix these things yourself, like NimChimpsky suggested, you will be cleaning up after this person forever.

I call BS on everyone who said that variable name spelling errors and formatting don't matter. Obviously, they've only read their own code. And notice that word right there - read. Imagine reading a book with lots of spelling mistakes, mish-mashed formatting, inconsistent line spacing, and various other laziness prevalent in a lot of source code. It would be tedious.

For a profession where your syntax must be 100% correct to work, there is simply no excuse for any real developer to not have a clean, consistent code style. Anything else is sloppiness and laziness. I always question sloppily formatted code's correctness in implementation.

I think conventions such as naming of classes and variables are important and should be followed through, elegant and efficient code too, but at the risk of having my answer downvoted many times, I have to say that in general the "pretty code" paradigm that is pushed a lot around is in IMHO very overrated.

First off, the developer who wrote it will have to maintain it in the first place, and if he is ever hit by a bus and another programmer cannot figure out how it works because the code is not "pretty", I'd say that the other developer is not very good anyway. And there is a lot of automated formatters/beautifiers out there, so anyone can use those to beautify the code if necessary, w/o wasting time while being "in the flow"/"in the zone".

We have a good code review system where I work, so we do get to look over and fix the worst stuff. However, it feels really petty to send a code review that consists of 50 lines of "Add a space here. Spell 'itarator' correctly. Change this capitalization. etc."

I'd change it myself and then add a polite comment in the code.

this assumes that there is already a style guide as the question stated :

We have a good code review system

So my suggestion is a last resort, I figure its just as quick to change it yourself and leave a comment, as it is to send an e-mail or whatever.

One of my colleagues writes html in such a way that it makes my skin crawl. Imagine my html nice and structured with two space indents, hacked to pieces by tags added to the end of mine which end on the same line or on the next like some drunk who needs to throw his arm around you to stay standing. New lines are rarely indented but if they are, I'm sure there's some highly chaotic black hole in some part of the galaxy spitting out irrational temperature values in such a way that somehow its digits mirror the number of spaces or tabs used in such indentation by this woman. If I'm lucky, I'll see an input tag that's closed with "</input>". Total nightmare you can understand.

Nobody seems to understand this either, seeing how for most higher ups here, organized code or unorganized code to them is like the difference between us putting swiss cheese or american cheese on our sandwiches, which is to say, they could really care less. I started letting it slide because I was stressed with another project, and I think she began to realize how difficult it was to understand code like that before she wanted to improve. My advice would be to demonstrate why it's preferable to style your code more than simply telling them to do it.

The code I'm talking about is usually technically correct, reasonably structured, and may even be algorithmically elegant...

Be happy that you got all of that. Most programmers will maybe give you the first thing on that list. I think that variable naming and spacing is the least important thing to worry about.

Sounds like you need to set up and agree to a style convention. If you don't you'll have libraries that have 3 space indents, others that have 4, some that use Camel Case and other that use underscore_case.

Even without a standard, insist on fixing mispellings in variable names (I wouldn't particularly worry about comments) as they will drive everyone who touches the code crazy forever.

Coding standards need to be identified so everyone knows what they are and then they need to be enforced. There should be consequences to not following the rules.

Here are the things that should provide some incentive:

If this person either doesn't have to worry about this because no one enforces your rules or they don't care if they are unproductive (and no one does anything about that), there's not much you can do about it.

I'd be tempted to suggest having a private chat and see if both of you could find a root cause:

As for why this has to be done privately, here are a few reasons:

We have a JUnit test that looks for formatting issues. It runs as part of the build. I continually get bit by omitting a space between if, while or for and the opening parenthesis. Our code is consistently formatted, though.

Code beautification like unscrutify will be able to solve some of your problems. If you are ready to pay for this then there are high level softwares which embed the rules in the source code itself like Parasoft. Parasoft makes it compulsory to write the code in uniform style. You can embed your own rules too. When such tools are used the developers are forced to use uniform style. And after a while they will get used to it.

If you use Eclipse, then enable Save Actions for the Java Editors, and tell everybody to use it. This fixes formatting issues on every save, but does not fix bad capitalization. It might be quite helpful though! 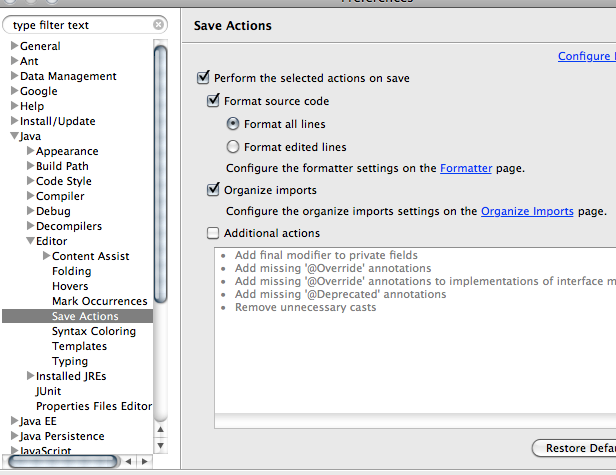 How hard is it to follow style conventions? I understand the spelling errors but the rest is an indicator of sloppy thinking and coding. Tell the person that they need to be more consistent when it comes to production code because they are not the only ones that will be looking at it. It's just plain rude, selfish, and inconsiderate to write production code in an inconsistent style.

LOL. You would absolutely hate my code. I can't spell to save my life and I don't care.

But I know some people do actually care about those things.

is usually technically correct, reasonably structured, and may even be algorithmically elegant

and if they can't then at least you can show the broken pretty code to the customer and sell them on that!

But seriously. Focus on the actually important things first. If you can't find a good, solid reason outside "it hurts my delicate sensibilities" then ignore it for now. If it is actually important then sit down with the person and convince them of that importance. Things like standards that make it easy to tell the difference between class level, method level, shared, constant variables do make a difference. If the coder in question cares at all about his/her profession they will understand and try to do the right thing.

My solution when dealing with outsourced resources that didn't give a &%$# about formating (or easily preventable bugs for that matter) was to have the build server enforce this. I created a CI server job that ran every night that checked the code out, ran Jalopy and findbugs then checked the code back in. Once the other team learned that not using the standard code conventions would make their job harder, they started to use their IDE to maintain a standard format.

Not the answer you're looking for? Browse other questions tagged coding-style code-quality teamwork code-reviews or ask your own question.

19
What to do if a co-worker is editing your code just to change the appearance?
15
How important is a good coding style for the decision to hire a programmer?

3
Coding Style And defects
10
How have you found, refined and maintained your coding style?
5
How can I keep current with Python coding style?
49
What is the actual value of a consistent code style
5
Is it important to have a consistent commit message style on a team?
2
(Style) "Good" way of dealing with flags/options
52
How do you normalize coding style among multiple isolated developers?