I'm confused about some of the notations of UML class diagrams. 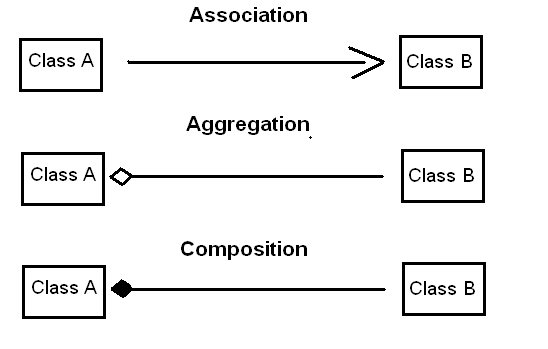 However, I'm having trouble understanding what the Aggregation and Composition arrows mean. Part of my confusion was caused by encountering different definitions of these notations.

Two definitions of the Aggregation notation:

Definition 1: An Aggregation notation between two classes is suitable whenever an instance of class A holds a collection of instances of class B (e.g. a List, Array, whatever).

Regarding what the Composition notation means and how it differs from the Aggregation notation, I'm not sure.

Please clarify the definitions and help me understand. Concrete examples would be welcome.

The three links Association, Aggregation and Composition form a kind of scale on how closely two classes are related to each other.

On the one end of the scale, there is Association, where objects of the two classes can know about each other, but they do not affect each others lifetime. The objects can exist independently and which class A object knows about which class B objects can vary over time.

On the other end of the scale, there is Composition. Composition represents a part -- whole relationship such that class B is an integral part of class A. This relationship is typically used if objects of class A can't logically exist without having a class B object.

The Aggregation relation is somewhere between those two ends, but nobody seems to agree where exactly, so there is also no universally agreed definition of what an Aggregation means. In that sense, both definitions that you found are correct and if you ask 10 people, you risk getting 11 different definitions.

Composition is when an object A contains object B and the object A is also responsible for creating the object B.

We have a class A which will be used by class B.

There are multiple options as how the composition may look.

You see this creates a tight relationship between the classes A and B. Class B simply cannot exists without A. This is a huge violation of dependency injection principle, which says:

A dependency is an object that can be used (a service). An injection is the passing of a dependency to a dependent object (a client) that would use it. The service is made part of the client's state. Passing the service to the client, rather than allowing a client to build or find the service, is the fundamental requirement of the pattern.

Composition sometimes makes sense, such as calling new DateTime in php or new std::vector<int> in C++. But more often than not, it is a warning, that your code design is wrong.

In a case, where the class A would be a special object used to caching, the class B would always be cached using the implementation of class A, and you would have no control to dynamically change it, which is bad.

Also, if you used the lazy initialization composition, meaning you would have a working object B, called the useA() method and the creation of object A would fail, your object B is suddenly useless.

Aggregation, on the other hand, is a way of relationship, which follows the DI principle. object B needs to use object A, then you should pass already created instance of object A to object B, and should the creation of object A fail, nothing would be passed in the first place.

In short, Aggregation is UML representation for dependency injection principle, be it constructor injection, setter injection or public property injection.

These are all Aggregations

The tightest, constructor injection (object B cannot exists without object A).

Looser (you may or may not use object A inside object B, but if you do, you should probably set it first).

There isn't really a great way to justify the usage of Aggregation over Composition, if all you are using are concrete implementations of classes, but once you start injecting interfaces or in case of C++ abstract classes, suddenly Aggregation will be the only way to fulfill your contract.

In addition an excerpt of the current UML standard:

[…] Sometimes a Property is used to model circumstances in which one instance is used to group together a set of instances; this is called aggregation. To represent such circumstances, a Property has an aggregation property, of type AggregationKind; the instance representing the whole group is classified by the owner of the Property, and the instances representing the grouped individuals are classified by the type of the Property. AggregationKind is an enumeration with the following literal values:

I already have posted an answer on Stackoverflow.

A composition is even stronger than an aggregation because the aggregated class cannot be aggregated by other classes. Its "life" depends on the container.

Not the answer you're looking for? Browse other questions tagged object-oriented uml class-diagram or ask your own question.

2
Object Instance Diagram - What can be modeled?
1
UML: do I use aggregation or composition in this case?