What is "condition testing" (as defined by the ISTQB Syllabus) actually good for? [duplicate]

I am currently checking through the syllabus for the ISTQB "Technical Test Analyst" certification. This syllabus (henceforth called "TTA syllabus") contains a chapter dedicated to "condition testing" (apparently this is also called "condition coverage" or "condition coverage testing".)

Condition testing as defined in the TTA syllabus strikes me as an exceedingly strange and possibly anachronistic thing that has more to do with Grandma's Ham Story than with software testing. Let me explain...

What is "condition testing" according to the TTA syllabus?

Referring to the "Advanced Level Syllabus - Technical Test Analyst, Version 2012" of the ISTQB, available here, "condition testing" is defined as follows on page 12:

Compared to decision (branch) testing, which considers the entire decision as a whole and evaluates the TRUE and FALSE outcomes in separate test cases, condition testing considers how a decision is made. Each decision predicate is made up of one or more simple “atomic” conditions, each of which evaluates to a discrete Boolean value. These are logically combined to determine the final outcome of the decision. Each atomic condition must be evaluated both ways by the test cases to achieve this level of coverage.

Condition testing is probably interesting only in the abstract because of the difficulties noted below. Understanding it, however, is necessary to achieving greater levels of coverage that build upon it.

So let's clarify the words

Suppose we have some software-under-test on which we want to do whitebox testing (i.e. we have the source code). The code naturally contains many of those decision predicates that we all know and love and that show up after strings like if, while, until etc. 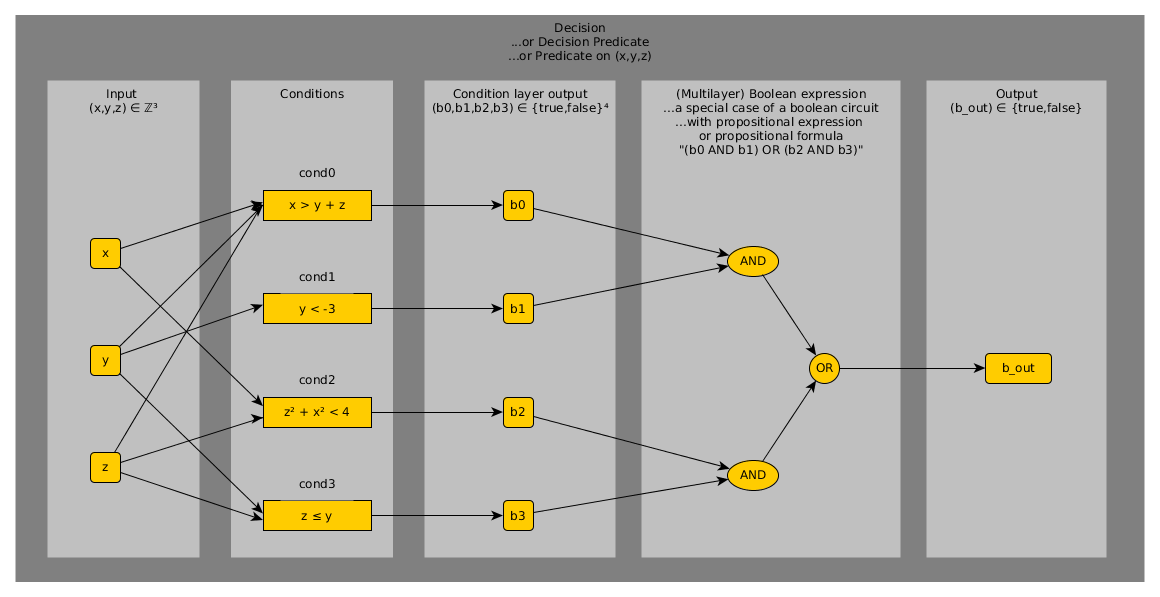 This decision predicate accepts a triple (x,y,z) of integer values (say) and outputs a boolean, b_out.

The first-level functions which map (x,y,z) to {TRUE,FALSE} are called conditions (also atomic conditions) in the TTA syllabus.

One attains "condition testing coverage" by running test cases until all the conditions found in the decision yielded at least once true and at least once false.

One can thus achieve condition testing coverage by running the following five test cases (for example):

And now the question

What is "condition testing" as defined above actually good for?

It won't help you ascertain the correctness of the decision predicate at all.

That is best done by a code inspection, letting a second team write the same expression and comparing outputs or running test cases at "boundary values" (e.g. here, for y = -4, -3, -2).

Checking the individual conditions strikes me to be more about testing the CPU's ALU or maybe testing the compiler output. It is certainly suitable for checking manually written assembler code or verifying manually assembled logic.

And this makes me think that "condition testing" could well be a leftover from the days where conditions were actually wired up on panels (for example in the ENIAC) and might thus be subject to wiring bugs. These days, the condition is written in high-level code and is exactly the one you conceptually want. While review might be useful, a testing of the condition is just a waste of time.

Or am I missing something?

A search of the IEEE Xplore library for "condition testing" yields only two papers relevant to software (all the others seem relevant to hardware only), both by K.C. Tai of the Department of Computer Science of North Carolina State University.

Checking one of those, Condition-based software testing strategies reveals that the author uses the term condition in the sense of decision above, i.e. in this paper "condition testing" is actually "decision testing". The condition as used in the TTA syllabus is called simple condition. It seems the TTA syllabus definitions are not widely used.

Condition testing is a direct consequence of the fact that each if in your software creates a "bifurcation" (essentially breaking your code up into two separate bits of code), thereby increasing the overall cyclomatic complexity of your code.

In order to get full code coverage in a white box testing scenario, you need to have some knowledge of the if conditions, so that you can make sure that each code branch is being exercised during testing.

As to the "correctness" of the code, that can be ascertained by writing meaningful unit tests. That is, for each input that exercises a particular path in the code, you can expect some output, the result of which demonstrates that the correctness that you are after has been achieved.

By "meaningful," I mean that, generally your unit tests will demonstrate that some contract or requirement has been fulfilled. But you still need to make sure you exercise all code paths, so that there are no unpleasant surprises later.

The best answer I could find (and which also applies to statement coverage testing and other types of coverage testing) is given by this page from atollic.com "Why code coverage analysis?"

More technically, code coverage analysis finds areas in your program that is not covered by your test cases, enabling you to create additional tests that cover otherwise untested parts of your program. It is thus important to understand that code coverage helps you understand the quality of your test procedures, not the quality of the code itself.

And this seems to be quite relevant here. If you have a test case set that manages to set the individual conditions of any decision to TRUE or FALSE, then you are quite likely invoking the code under test with a rather exhaustive set of input values!

Good condition coverage does not tell you much about the code under test (unless the code blows up or generates detectable faults) but gives you confidence in your test case set.

This is interpretation is correct. In the paper The effect of program and model structure on MC/DC test adequacy coverage (Ajitha Rajan and Mats Heimdahl, University of Minnesota, ICSE, 2008), which is about the related "Modified Condition/Decision Coverage" (MC/DC), one reads:

Adequacy of test suites is currently measured using the MC/DC metric on source code (or on a model in model-based development) ... Test adequacy metrics defined over the structure of a program, such as statement coverage, branch coverage, and decision coverage, have been used for decades to assess the adequacy of test suites. Such criteria can be useful tools when evaluating a testing effort.

The paper also concludes that MC/DC coverage is highly sensitive to the structure of the SUT. Purely syntactic rearrangements can change MC/DC coverage dramatically. This is of course because MC/DC just works on the syntax, not on the data flow, and is therefore a rather suspicious measure in any case. But that is another problem entirely.

Not the answer you're looking for? Browse other questions tagged testing conditions test-coverage or ask your own question.

21
Is test coverage an adequate measure of code quality?

9
Branch vs decision coverage question
7
Is path coverage stronger than condition coverage?
0
What the white box testers create test cases against?
1
Does condition coverage subsume edge coverage?
3
Why in cyclomatic complexity we add 1 for operators within a condition?
7
To what extent should I test what should not happen
2
Conditional vs Logical Testing
4
How to comprehensively test software that doesn't play well with testing?