This thread will be long, but I will try to make it as short as I can. Thank you.

I have recently implemented a relatively simple program. What this program does is generate a simple piece of music and play it.

I will describe the object oriented design of the program and would like to hear your review of the design. Especially how well it fits the SOLID principles, where it doesn't, and how I can improve my design to be more SOLID in the future.

(If there's something in the description that isn't clear enough, please tell me.)

I have divided my design into two parts.

1- The "behind the scenes" system that generates the content - a series of notes and chords (as will be explained later) - and is responsible for playing it.

2- The system that provides a UI to control the "behind the scenes" system. This system tells the other system when to create new music and when to play it.

I will describe each system separately.

System 1 - responsible for the generating and playing music.

The way music is created is by first generating a chord progression (a series of chords to be played one after the other), and then generating a melody based on that progression. I will describe how this is designed 'from the bottom up'.

Class Note: the most basic class. Responsible for playing sound files, and is set in instantiation to play a specific sound (C, D, etc.). It has an interface to play() and to stop() the playback. It also has a method getName() to identify it (the name is fed to the Note through the constructor).

Class Chord: this class is instantiated with an array of three Note objects and a name. For example, a Chord named cMajor will be instantiated with the Notes c, e, and g and the string "CMajor". Chord has an interface to play() and stop() the notes it's composed with, has a method getName() and a method getNotes() that returns the array of Notes.

Class Progression: this class is instantiated with an array of Chord objects, and has logic to play and stop them one after the other in a particular tempo (speed, in BPM - beats per minute). It has a method play(int bpm) and a method getChords() that returns the array of Chords.

Class ProgressionGenerator: implements an algorithm to create a particular series of Chord objects, and instantiate a Progression with these chords.

Class MelodyNote: composed with a single Note. It has an attribute double duration which specifies for how long this note is to be played relative to a measure/bar of music (e.g. 'half note' is specified as 0.5, 'quarter' as 0.25). It has a method getDuration() and an interface to play() and stop() it's inner Note (basically delegates to the Note).

Class Melody: composed with a series of MelodyNotes. Has logic to play the series of notes in a particular speed. It uses each MelodyNote's duration to know when to stop a note and play the next one.

Class MelodyGenerator: implements an algorithm to generate a series of MelodyNotes and instantiate a Melody with it. It does this based on a Progression. The method signature is Melody generate(Progression prog).

Each object controls it's inner objects and exposes them. For example Chord has logic to play it's inner Notes, and has a method getNotes() that returns them to whoever needs to know. For example, MelodyGenerator uses progression.getChords() in order to build a melody according a particular series of chords. It also uses chord.getNotes() when choosing what notes to place over a chord.

One last thing: the generators use the singleton class NotesAndChordsSupplier to get the Note and Chord instances they need. It hands them existing instances.

System 2 - responsible for providing a UI to control the creation and playback of music.

This system is designed using the MVC pattern. The Model encapsulates the creation and playing of music. The View is the UI that provides buttons to tell the Model to play and make new music. The Controller is notified by the View when buttons are pressed and invokes the proper actions on the Model.

The Model is connected (in a loosely-coupled manner) to two objects: it's Melody and the View - both via the Observer pattern.

This way, the View gets notifies when playback is finished, so it can re-enable it's UI buttons that were disabled during playback.

The View is the UI and it has two buttons: Play and New Tune. They invoke playButtonPressed() and newTuneButtonPressed() on the Controller, respectively.

As I said, the View is registered as an Observer to the Model. It is notified when playback of the music is finished, so it can re-enable it's buttons that were disabled by the Controller when playback started.

When the View calls newTuneButtonPressed() on the Controller, it simply delegates to the Model: model.makeNewMusic().

All buttons on the View are disabled by the Controller when music playback starts.

(Please note: in this post I ommited a class Scale, which isn't important. Ignore it in the diagram). 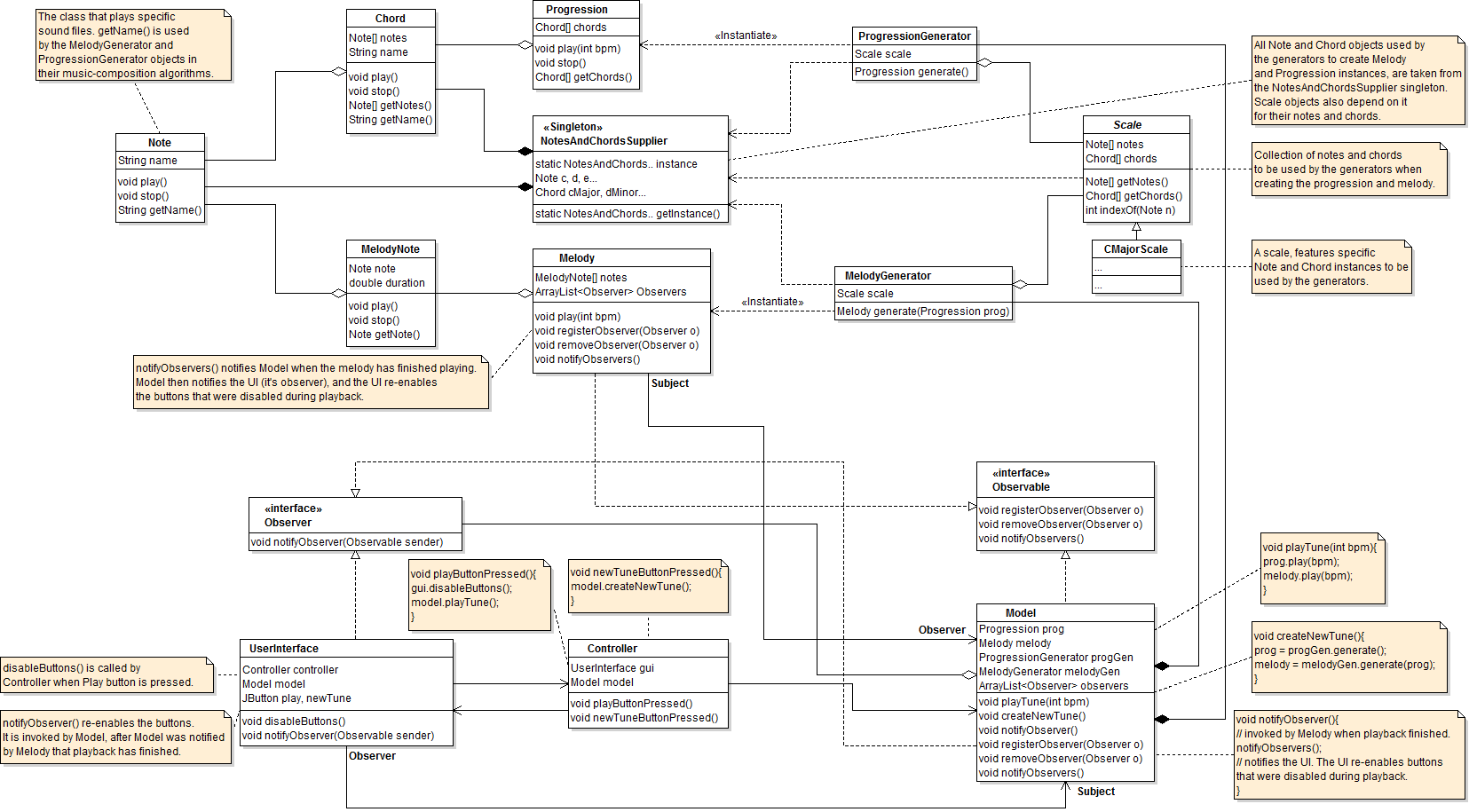 Thank you for reading all of this. I will appreciate any kind of criticism of the object oriented design of the program.

Especially, how well are SOLID and OO principles integrated in my design, and how can I design more in the spirit of SOLID on the future.

I'm not sure I can give you a thorough review via internet, but some notes as I read through:

...and that's about it. Hope that helps.

Not the answer you're looking for? Browse other questions tagged design architecture object-oriented-design review or ask your own question.

0
Evolution of my MVC design with new UI complexity
1
Law of Demeter in MVC regarding Controller-View communication
9
MVC: my controller seems useless half of the time. Is this a problem?
3
What do I gain by using the Strategy pattern in this case?
6
Requesting feedback on my OO design
3
Should this interpretation happen in the Controller or the Model?
1
MVC design. Appropriate Connections
0
How should the model notify changes to the controller in the MVC paradigm?
1
How to inform presenters of sub views of a main window about global data change in an MVC or MVP GUI app?