I've just finished reading The Art of Unit Testing, by Roy Osherove. It was an interesting book, but I'm having trouble with something he mentions near the end (section 11.2.2):

Is this not considered a call to a class because Math.Floor is a static method? Or is Osherove saying that the line of code above is bad design? Another example:

Is this bad design due to the use of a StreamReader? Or is this instance of StreamReader simply an object that holds data, as described in the quote above?

Rather than starting a discussion on whether or not it's bad practice to have classes call other classes, my goal here is to try and better understand what Osherove means in the passage I've quoted. Does he really mean that the code in the two examples above should be avoided? Thanks in advance for any replies.

EDIT: Below is an illustration from the book which is possibly elucidating. 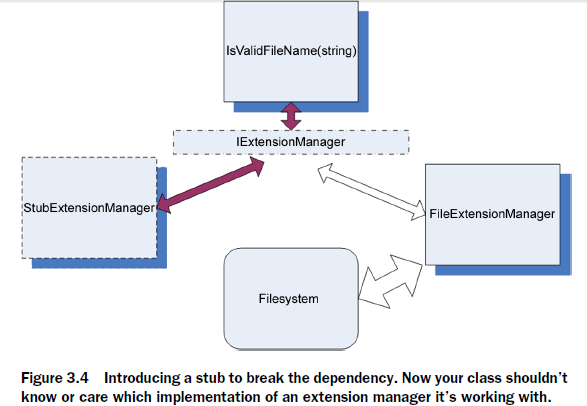 disclaimer: I didn't check that any of the code in this answer actually compiles - it's only there to demonstrate a point.

In our case, it seems like the Dependency Inversion pattern is being cargo-culted. Using DI for every class(save for data-only classes) is impossible, as at some point concrete classes are needed to be constructed. At the very least, some static methods and all factory classes should be exempted from this rule.

This exemption will make the task possible - but still needlessly hard. The key behind using Dependency Injection properly is understanding that you need to decouple modules(or components), not classes. Classes of the same module should be allowed to use other concrete classes of the same module. Of course - deciding where the boundaries between components go - which classes belong to each component - requires thought, something that is forbidden in cargo cults.

Your Math.Floor example is and example of "too small for can-be-used-by-interface-only". Inversing the dependency here will require something like:

You need to be very deep in the cargo cult to ignore the fact that these two benefits are completely useless here. It's hard to imagine a method that does Floor better than System.Math.Floor, and any attempt to mock it - unless it only works for specific cases - will be more complicated and error-prune than just doing the damn flooring.

Compare with the costs:

and it's easy to see that it just ain't worth it in this case. An example of "too high for the only-use-interfaces" is your Main method, which needs to actually create concrete objects that can't be injected to it.

Your StreamReader example is actually a good example for something that can possibly benefit from Dependency Inversion:

Still - at some point a concrete object needs to be created. Here we should find a place that's "too high for the only-use-interfaces", where we can create the TextReader or a factory object that can create a TextReader and inject it down until it's used:

The first example does not apply since it is essentially an arithmetic expression. You seldom write unit tests for arithmetic operations; when you do, your approach would be quite different.

In the second example, your code is using the concrete class. This means that the code inside the curly braces is harder to test since you are binding the StreamReader at compile time. What the author is describing is to defer the binding of reader as late as possible. When you do that, it becomes possible to test the use of reader with less pain.

That being said, many of the code mocking tools do a sufficiently good job to allow substitution of the mocked item for the real thing. This is the intent of the prescription: keep as many useful "seams" as you can in your code, because you do all of your testing at the seams.

Not the answer you're looking for? Browse other questions tagged object-oriented unit-testing or ask your own question.

9
Unit Testing: “It's a code smell if you're refactoring and there are no collaborators”?
0
Correct Seam for Stub
6
How should I refactor switch statements like this (Switching on type) to be more OO?
3
What is the correct Object Design/Architecture for the following scenario?
33
The principle of least knowledge
3
What is a proper way to implement object cloning with deep copy, using generally accepted OOP principles?
1
Logical vs Physical Entities in OO Class Design
3
What differentiates function objects from poltergeists?
0
Good object oriented practice to use an object to build itself?