Can I create a query which allows me to do this?

I have a table which stores user information, one column stores their ID. I had implemented four different attributes in the same table which stored a bit indicating which file operations that user could perform (read, create, update, delete).

Thankfully, I realized that was terrible implementation and instead created four different tables with one column (the userID) which indicated which actions they could perform. It's really about me being annoyed by the over-whelming number of zeros. It does save on space, even if it's negligible.

However, this database is also queried by an application in an OOP language, and one of the objects frequently created is a User. This class naturally stores which file operations the User can perform. In the old implementation, these (boolean-valued) object fields could be quickly populated from the user table, but not now.

Now I'm confused on how I should populate these object fields. I feel like I should be able to perform a single query telling me which permission tables the user belongs to, but cannot find the write syntax (if it even exists).

So my question is: is there a way to perform a single query to figure out which tables (which only consist of a single column) a value occurs in? Or do I have to query each table independently to fill these object fields?

It's not a good idea to separate those attributes to their own tables. It makes your data unorganized.

If your attributes are simple boolean type, you can combine them as one numeric value. Just think of each attribute as a specific bit position.

This model allows for other types of actions besides "file actions" (operations, sorry I'd already created the model with 'action' instead of 'operation'). 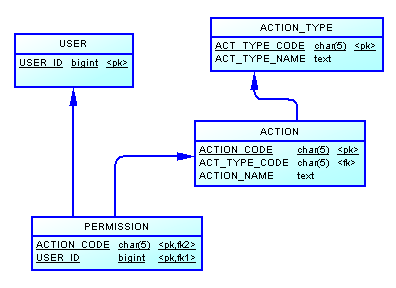 The query to see what file actions user 3 has permission to perform is (you can easily create a view based on this query leaving out the where clause) :

Which will yield this:

5
Search multiple tables
1
How to Design Database with User-Contributed Content
2
Effect of denormalizing
1
DB Design for non static front-end
0
Designing an efficient search by tag solution
0
Is it good practice to create a static class for database tables calculations?
0
Does it make sense to have redundant DB fields to improve query performance, programming speed and code readability?
0
Is there a difference between these two data models?
0
Best practice or patterns to couple complex custom objects to custom logic