Algorithm for detecting windows in a room

I am dealing with the following problem and i was looking to write a Pseudo-code for developing an algorithm that can be generic for such a problem.

Here is what i have come up with thus far.

In this step i try to get the robot where it maybe placed to the top left corner.

I would like to declare a variable called turns as it will help me keep track if robot has gone around entire room.

Now we are facing north and placed on top left corner.

I believe in doing so the robot will go around the entire room and count windows and it will stop once it has gone around the entire room as the turns get decremented. I don't feel this is the best solution and would appreciate suggestions on how i can improve my Pseudo-code. I am not looking for any code just a algorithm on solving such a problem and that is why i have not posted this in stack overflow. I apologize if my Pseudo-code is poorly written please make suggestions if i can improve that as i am new to this. Thanks.

You need to find the top left corner. Instead, move forward (no matter the current orientation of the robot) until you hit the wall, then turn right. Those are the steps 1 and 2 in the illustration below. At the step 2, the robot turns right, orienting itself to the top.

The second phase is to move forward, constantly turning left to see whether you're near a wall or a window. For example, at step 6, the robot will turn to be oriented to the left, see that it's a wall, and turn back to be able to move to the top. At step 7, the robot turns left, sees that it's near a wall, and can now turn right twice, since it knows that there is also a wall at the top of it. It performs a similar operation at step 16, 23 and 32.

At step 9, it records that it's near a window. At step 10, he knows that it previously had a window at the top of it, so there is no need to count a different window. 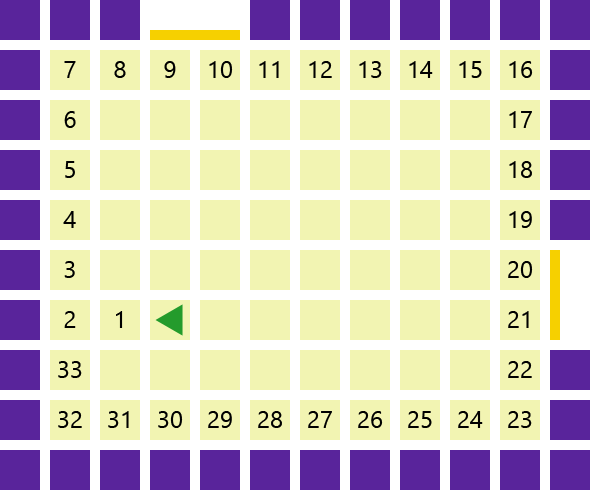 The approach supposes that:

The algorithm may further be improved, for example by handling the case where the robot touches the wall in its initial position, but I suppose such optimizations are outside the scope of the exercise.