Interconnect nodes in a Java distributed infrastructure for tweet processing

I'm working in a new version of an old project that I used to download and process user statuses from Twitter. The main problem of that project was its infrastructure. I used multiple instances of a java application (trackers) to download from Twitter given an specific task (basically terms to search for), connected with a central node (a web application) that had to process all tweets once per day and generate a new task for each trackers once each 15 minutes. The central node also had to monitor all trackers and enable/disable them under user petition.

This, as I said, was too slow because I had multiple bottlenecks, so in this new version I want to improve the infrastructure and isolate all functionalities in specific nodes. I also need a good notification system to receive notifications for any node. So, in the next diagram I show the components that I'll need in this new version: 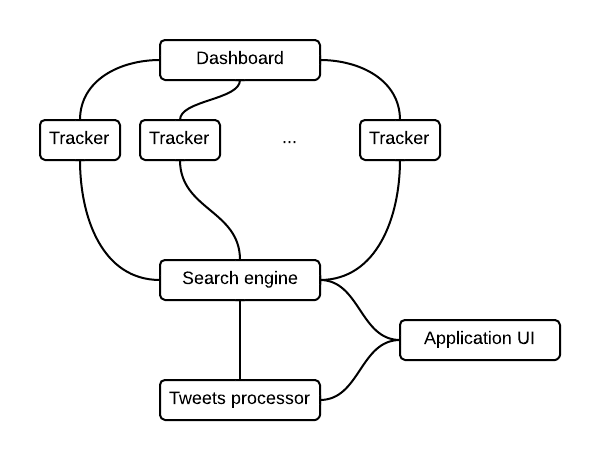 As you can see, there are more nodes. Here are some notes about them:

So, having this components, my main headache is how to structure all to not have to rewrite a lot of code every time I need to access any new data. Another headache is how can I interconnect nodes. I could use sockets but that is a pain in the ass. Maybe a REST layer? And finally, if all the nodes are isolated, how could I generate notifications for each user which info is only in the database used by the Application UI?

I'm programming this using Java and Spring (at least I used them in the last version) but I have no problems with changing the language if I can take advantage of a tool/library/engine to make my life easier and have a better platform. Any comment will be appreciated.

You could use RPC to communicate between nodes. In my opinion that's the best way to do it. Communicate nodes directly to each other, and have the master send them tasks also via RPC.

Master node can have a table of slave nodes. Each new slave node checks-in with the master node, this is how the table is created. In the master node you can have an RPC server up and running on some fixed port like i.e. 15000. Each slave node once it's started pings the master node and reports to it by executing some method and pass in something like data from the slave node. This is how it's usually done. You can check Hadoop's IPC for more info.

Not the answer you're looking for? Browse other questions tagged java design distributed-computing or ask your own question.

5
How to implement a lightweight clustered architecture for a distributed application
6
Design of high performance file processing web application
7
Where to store global enterprise properties?
1
Options for repeated distributed task
2
Design for autocompleting words in search engine?
12
Patterns for maintaining consistency in a distributed, event sourced system?
1
Would this system be considered decentralized or distributed?
0
How to associate tree nodes with other objects before they have unique identifiers