I'm using svn without branches (trunk-only) for a very long time at my workplace. I had discovered most or all of the issues related to projects which do not have any branching strategy. Unlikely this is not going to change at my workplace but for my private projects.

For my private projects which most includes coworkers and working together at the same time on different features I like to have an robust branching strategy with supports long-term releases powered by git.

I find out that the Atlassian Toolchain (JIRA, Stash and Bamboo) helped me most and it also recommending me an branching strategy which I like to verify for the team needs.

The branching strategy was taken directly from Atlassian Stash recommendation with a small modification to the hotfix branch tree. All hotfixes should also merged into mainline. 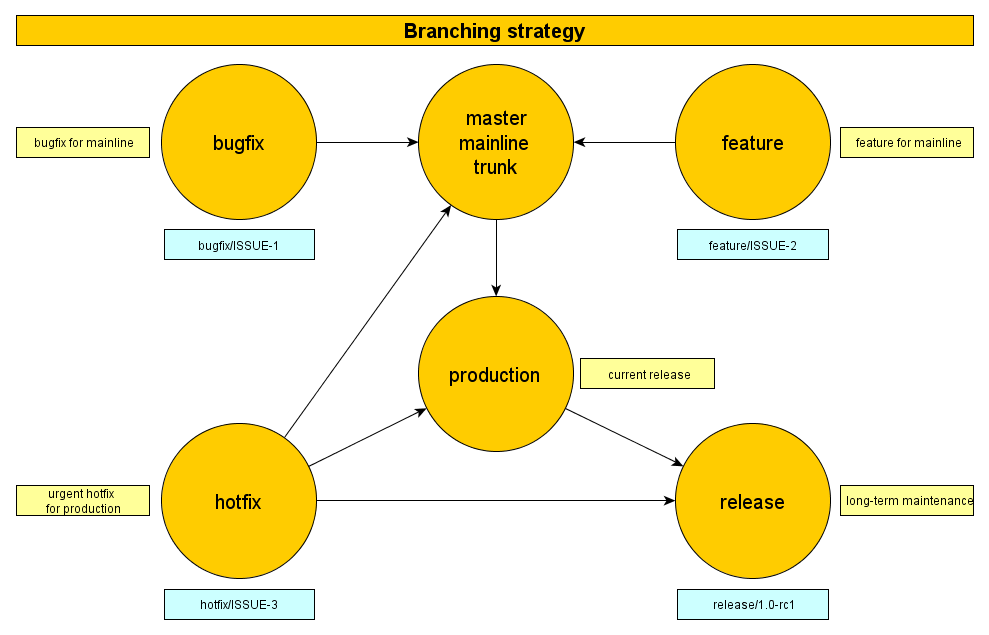 The branching strategy in words

I am not an expert so please provide me feedback. Which problems might appear? Which parts are missing or slowing down the productivity?

The shortest answer: No single branching strategy is going to be optimal for every project, as such the strategy you have above will be perfect for some projects you have, and useless for others.

The various factors you need to keep in mind are (among others, if any more are suggested i will happily edit them into this answer):

The strategy you described above is optimal for the case of:

That said, a much more useful question to ask is in this form: "My project is structured like [this], what is the optimal branching strategy for this, what are the drawbacks it has?"

http://nvie.com/posts/a-successful-git-branching-model/ outlines a comparable branching model which the writer claims to have been using successfully on a number of projects.

Not the answer you're looking for? Browse other questions tagged git svn branching or ask your own question.

91
To branch or not to branch?