Should I have different automated Selenium tests for different screen resolutions?

A website I'm creating is going to have three breakpoints: desktop, tablet landscape, mobile. Should I write a test for each resolution?

It is unlikely that you catch layout-related regressions with Selenium tests:

You can, however, use pdiff tests to detect changes in layout: the goal of those tests is specifically to catch visual regressions. If you target three screen sizes, it is indeed a good idea to run the tests for all three sizes. It is not unusual to use four or five sizes, and is especially valuable given that developers rarely check how their changes influence the layout for very small or very large screens.

Use a design spec test to validate computed CSS properties for each breakpoint. For example: 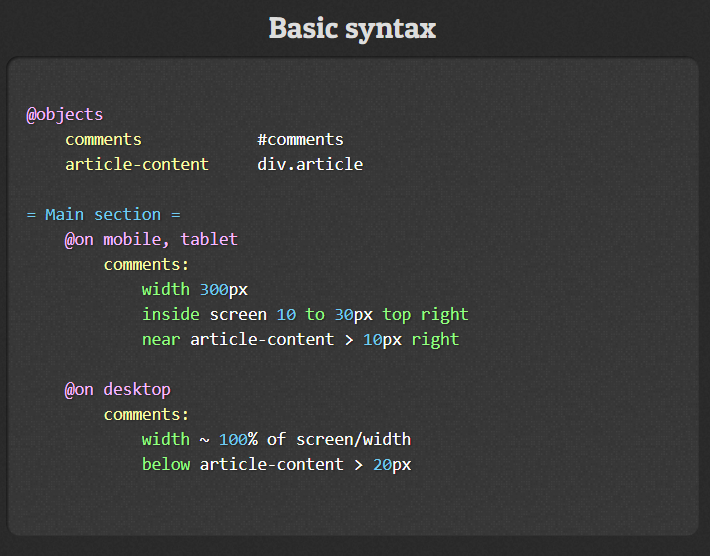 At the top of the spec file, we define named elements using CSS selectors. These can then be used throughout to refer to elements by name.

We then group element checks by viewport size so that we can make different checks at different responsive breakpoints. Named viewport sizes like small, medium and large are entirely customisable. The exact viewport dimensions are specified in a global test suite file that isn’t shown here. The * group runs checks for all viewport sizes.

Within each viewport group, we then provide the name of the element we want to check. Within each of these are the actual checks we want to carry out. Checks tend to focus on dimensions or relative position to other elements in a component. It is also possible to directly check final computed CSS properties, like text color or font size.

Not the answer you're looking for? Browse other questions tagged testing selenium or ask your own question.

1
Automated Acceptance tests under specific contraints
2
Smartphones and tablets for testing
2
Writing selenium tests, should I just get it done or get it right?
3
How to pick the testing values for parameterized tests for stateless functions?
5
Should unit tests always overlap
5
Automated Tests on Dynamic Content
1
Are automated UI tests necessary? What should be tested?
3
Automated Testing: where do I put Selenium?