Bug Report System - Getting people to use it

I've built already a bug report system. It looks like this: 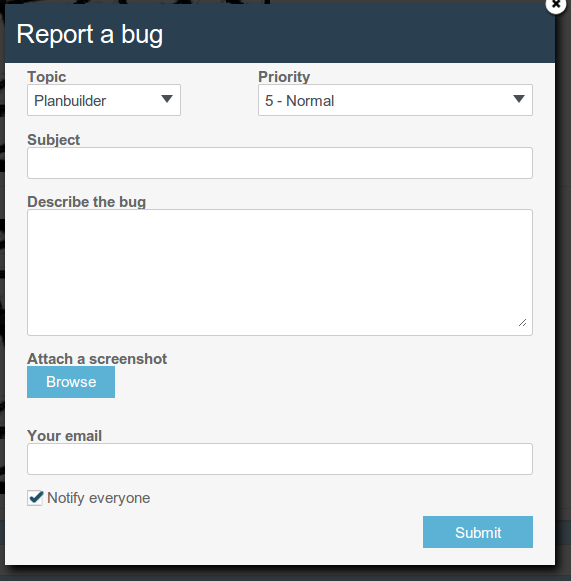 It is accessed using a secret key combination detected by the JavaScript code. Not hard. It has everything - sends the standard emails to management and testers, logs the Javascript variables and current DOM HTML. We are also improving the backend of the system to act as a full bug report system. Previously, it was only via email.

The problem is, unfortunately, the bug reporters still preferred email. Even when I refused to answer their queries until they sent a bug report, they would not consistently send them.

I don't understand it, because, for them it should be easy, but they act like it was a big deal. (The appearance was slightly more complex before, but still, all they had to do, minimally, was type a subject and press SUBMIT). I can't ask them, because they really have no idea.

The second issue, more difficult, is to create a way to manage these issues that will be suitable to us developers. I actually have been satisfied managing new issues and bugs via Gmail inbox but my co-worker would like to use a system. He gets more mail than I do and has other reasons.

I am completely at a loss for what to do. My problem is solved as much as I need it to be. When I look at other bug report systems, they both look terrible and are often expensive. Moreover, if even one person reports a bug via email, it will be a disaster! We can't refuse every bug via email and then will have two bug reporting systems.

Sorry to put out all these complaints here, but maybe someone has some insightful advice that hasn't already been said.

It seems you are "influencing" a change in the culture, that takes time. In addition, bug management systems are a heavy cost, primarily because we have our email accounts open all day in the background, but for a bug management system, a user is asked to open yet another system which they have to learn to use, etc.

A few things you can try:

Despite all of this, you could still have some bugs that will be missed because people tend to start email discussions asking a behavior and very soon it turns out its a bug, and no one opens one in the bug management system. Having that email integration may help, but then such issues just have to be managed along the way...

If bug reporters are ordinary users, I can see why they would prefer to contact you by email. Let's imagine I'm an ordinary user and I want to report a bug.

First, the Report a bug form itself. Despite your attempts, it's not intuitive.

Talking about the environment:

Finally, the terminology. What should be reported?

Bug reporters may not be inclined to use the form because:

To encourage the users to actually use the form, you may:

Finally, why not mixing both emails and reporting through a form? FogBugz does that.

Or if reports by email really annoy you and you can afford being unfriendly with bug reporters, then:

just bounce the emails back to them with a brief message: "Please put this in the bug database. I can't keep track of email."

Not the answer you're looking for? Browse other questions tagged bug-report or ask your own question.

32
Getting users to write decent and useful bug reports

13
How to report a bug to developers? A programmers quest to educated on bug reporting
32
Getting users to write decent and useful bug reports
706
My boss decided to add a “person to blame” field to every bug report. How can I convince him that it's a bad idea?
9
Avoiding duplicate bug reports
5
Is it good practice to put bug analysis and fix code in bug report?
0
How to make a good bug report for a bug that does not appear on every user?
81
How to respond to a rude bug report?