I'm reading algorithms and I understand most of it, one thing that I can still struggle with a lot is something as simple as running times on different for-loops. Everyone seems to have easy with that, except for me and therefore I search help here.

I am currently doing some excercises from my book and I need help completing them in order to figure out the different running times.

The title of the exercise is: "Give the order of growth(as a function of N) of the running times of each of the following code fragments"

We have learned different kinds of running times/order of growth like n, n^2, n^3, Log N, N Log N etc. But I have hard understanding which to choose when the for loop differs like it does. the "n, n^2, n^3" is not a problem though, but I can't tell what these for-loops running time is.

Here's an attempt of something.. the y-axis represents "N" value and the x axis represents times the outer loop has been run. The drawings in the left is: arrow to the right = outer-loop, circle = inner loop and the current N value. I have then drawn some graphs just to look at it but I'm not sure this is right though.. Especially the last one where N remains 16 all the time. Thanks. 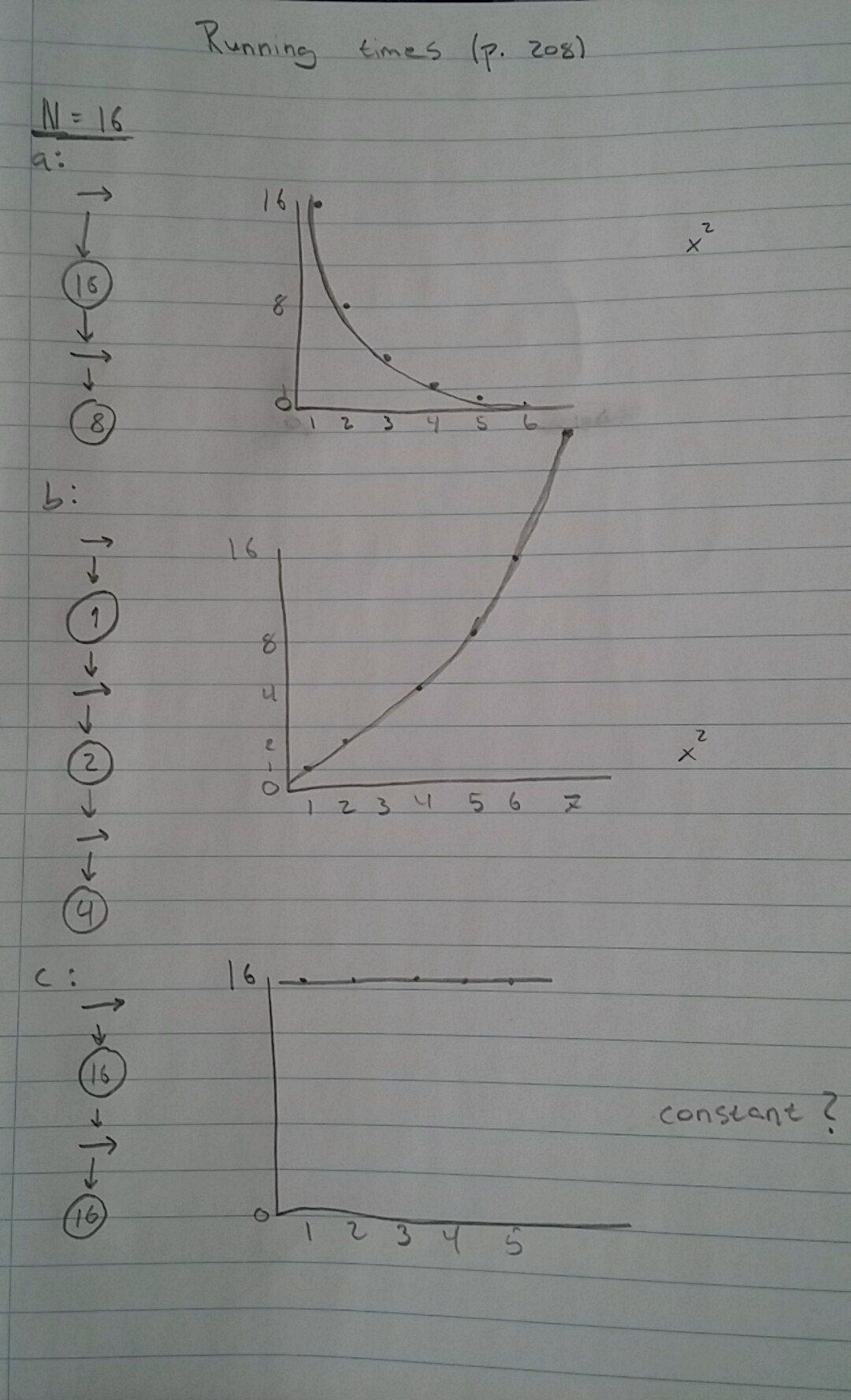 The interesting coincidence in this set of problems is that the run time of each computation is actually proportional to the final value of the sum (can you see why?) so the question can be simplified to: how does the final value of sum vary with the parameter N?

The sum can be calculated algebraically, but we don't need to know the exact result. We just need to make some good estimates.

How many times does the outer loop run? It starts at N and goes down by half each time until it hits zero. This is just (a discrete version of) an exponential decay with a base of 2. Therefore, we can make an educated guess that

Here, we define p to be a counter that increases by 1 each time the outer loop is repeated. In fact, this is exactly what your graph plots.

Where does p start? We can just pick p_start = 0 for convenience, and this allows us to determine the coefficient of proportionality:

Where does p end? Whenever n reaches zero! Since this is integer division, n can only be zero if N < pow(2, p). From this we can deduce that p_end ≈ log(N) (base-2 logarithm). With experience, you can easily skip this entire analysis and jump straight to this conclusion instead.

Now we can rewrite the loop using the variable p instead of n (again, approximately). Notice that every instance of n must be substituted:

The advantage of writing the loop like this is that it becomes obvious how many times the outer loop is repeated. (Keen readers may notice that this is

The inner loop consists of only increments to sum and is repeated N / pow(2, p) times, so we can just rewrite the above to:

From this code we can write the value of sum as:

(As randomA noted, this is just a geometric series so there is a well-known closed-form expression for the sum. Here I use a more general technique based on calculus, however.)

This can be simplified further by approximating the summation as an integral:

And there you go, the run time of the problem A is linear with respect to N.

The problem here is similar, but I'll omit some of the steps. The variable i grows exponentially, so we can do the transformation:

with p increasing by one at each iteration, starting from 0, and ending at log(N). After variable substitution, the loop becomes:

You can apply the same tricks again to find a closed-form expression for the sum: it is also O(N).

This one is actually quite a bit easier because the number of repeats of the inner loop doesn't depend on the outer loop variable, so we can go right away and simplify this to:

The loop has the same exponential behavior as in Problem B, so it is run only log(N) times, so this can then be simplified to:

The actual running time is less important than the growth of the running time as a function of the algorithm's inputs from the theoretical perspective of studying algorithms. Real world is typically different.

Regardless, the book is probably discussing running times as a way to illustrate different code structures.

A simple Java example for timing code looks like the following. Most popular languages have a similar way of accomplishing the same thing.

Use this programming idiom for each code structure you listed and compare the results. That sounds like what the book is telling you.

Given how fast modern CPUs are and how effective modern compilers are at optimization, I would recommend looping millions of times to get an accurate comparison. That means the variable N in your code should be quite large. I would also run each algorithm several times and take the average.

The reason for that is there is overhead associated with any code. To have an accurate comparison you want to make sure factors such as cache misses are minimized.

Not the answer you're looking for? Browse other questions tagged algorithms big-o runtime or ask your own question.

3
Do Databases Optimize Queries with Sum/Average or Other Aggregates?
2
Asymptotic running time of for-loops
8
single for-loop runtime explanation problem
1
Is it possible to apply Master Theorem for finding the square and cube root
0
What is the justification for the running time of this loop?
0
My algorithm is too slow
3
Is this a sorting algorithm faster than O(n*log(n))
2
Running time for simple for loops - Big O notation