I'm trying to figure out what sort of data structure to use for modeling some hypothetical, idealized network usage. 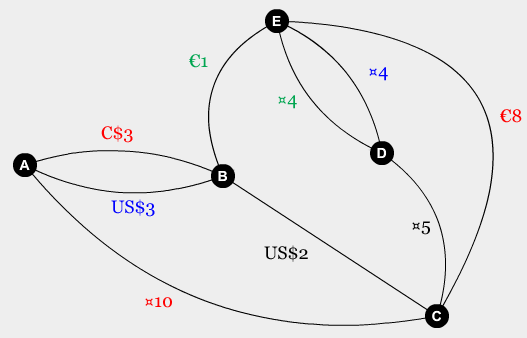 Image generated with the help of NCTM Graph Creator

I think the core of this is going to be an undirected cyclic graph, with nodes representing computers and edges representing Ethernet cables. However, due to the nature of the scenario, there are a few uncommon features that rule out adjacency lists and adjacency matrices (at least, without non-trivial modifications):

I'll need to do several operations on this graph, such as:

My first thought was to simply create a collection of all of the edges, but that's terrible for searching. The best thing I can think to do now is to modify an adjacency list so that each item in the list contains not only the edge length but also its cost and current owner. Is this a sensible approach? Assuming space is not a concern, would it be reasonable to create multiple copies of the graph (one for each user) rather than a single graph?

Assuming space is not a concern, would it be reasonable to create multiple copies of the graph (one for each user) rather than a single graph?

It seems to me that you should use what we could label ”layered graphs”, i.e. add a combinator for graphs, say @, so that:

With such layered graphs, you can define K to be the kommon available information and R, G, B each private information so that each player is actually seeing R@K, G@K, B@K.

To actually implement this, you may look for a graph library implementing algorithms generically, i.e. so that the longest path algorithm etc. are parametrised by the actual representation of your graph. So if your library says

you can easily replace it with

where you are supplying the LayeredGraphs and borrowing the rest from the library.

For those working in python, the networkX library has ready to use implementations:

Not the answer you're looking for? Browse other questions tagged data-structures graph or ask your own question.

7
How can I find the shortest path between two subgraphs of a larger graph?

7
What data structure could I use for modeling a network of nodes and edges?
2
Generic Adjacency List Graph implementation
8
What algorithm should I use to find the shortest path in this graph?
7
Finding most Important Node(s) in a Directed Graph
1
Euclidean Space Fully Connected Nondirectional Graph: Shortest Path to all nodes
7
How can I find the shortest path between two subgraphs of a larger graph?
1
How many vertices/nodes are too many in a graph and stop being beneficial?
4
Are there multiple Hamiltonian Paths on a Graph?
0
Possible trajectories with time travel