Requesting feedback on my OO design

I'm working on an application that creates music by itself. I'm seeking feedback for my OO design so far. This question will focus on one part of the program.

The application produces Tune objects, that are the final musical products. Tune is an abstract class with an abstract method play. It has two subclasses: SimpleTune and StructuredTune.

SimpleTune owns a Melody and a Progression (chord sequence). It's play implementation plays these two objects simultaneously. StructuredTune owns two Tune instances. It's own play plays the two Tunes one after the other according to a pattern (currently only ABAB).

Melody is an abstract class with an abstract play method. It has two subclasses: SimpleMelody and StructuredMelody.

I think you're starting to see the pattern. Progression is also an abstract class with a play method and two subclasses: SimpleProgression and StructuredProgression, each composed differently and played differently.

(It's important to note that the generate methods encapsulate complex algorithms. They are more than mere factory method. For example SimpleProgressionGenerator.generate() implements an algorithm to compose a series of Chord objects, which are used to instantiate the returned SimpleProgression). 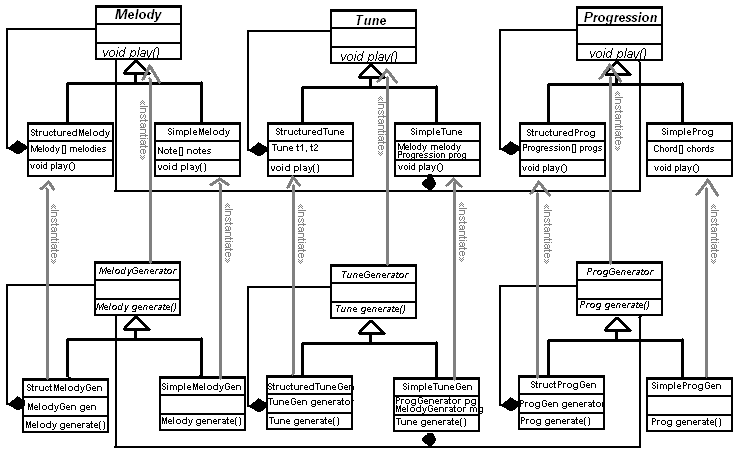 Parts of this design are meant to allow the end-user through the GUI to choose what kind of music is to be created. For example the user can choose between a "simple tune" (SimpleTuneGenerator) and a "full tune" (StructuredTuneGenerator). Other parts of the system aren't subject to direct user-control.

My question regarding this design is rather specific:

When I look at my design, it looks like the design-equivalent of 'code duplication': 'class-duplication' or 'design-duplication'. You can clearly see what I'm referring to if you look at the above diagram.

My question is split into two:

Are those really subclasses? I don't think you need all those subclasses.

As you've already pointed out:

In other words, SimpleMelody is an Array of Notes, not an "is a" melody. StructuredMelody is an array of melody objects, not an elaboration of Melody.

They are just collections, in other words. If you want to wrap those collections in their own classes and give them additional properties or methods, use composition, not inheritance.

There's nothing wrong with having one-for-one generator classes. If that makes you uncomfortable, put static factory methods in the actual classes, as in

In general, I think you're creating a lot of abstraction for not much benefit. Just stick with Note, Melody and collection classes at first, and add the additional abstractions if you need them.

Design as you talk

As already pointed out, you have some smelly stuff going on.

StructuredTune owns two Tune instances. It's own play plays the two Tunes one after the other according to a pattern (currently only A-B-A-B)

StructuredTune is a Tune that owns 2 tunes.

Now read the above again but change Tune with Melody.

Now read it another time, but now replace Tune with Progression

And it starts with the big picture. A StructuredMelody knows about Melodies where as a SimpleMelody knows only about Notes.

So a StructuredTune is actually a StructuredMelody. Only instead of having Melodies directly it holds Tunes that hold a Melody. wow! But then now you have the ability to also add Progressions (also known as Chords?).

Now read the same again, but with an extra iteration of those Progressions in them.

No really, I'm a musician and (should) know a lot about music stuff. But you lost me, a long while back.

The wrong pattern for the wrong reason

that is your problem :) You found a cool pattern and re using it everywhere. That's not cool!

Side note: been there done that. I abused the SingletonPattern for over a year, just because I liked it.

better because nothing is 'best'. We just have better solutions.

First of you should choose an approach. One could go for the pitch+note approach where a Note consists of a pitch and a duration. Or forget about pitch and only use a note and handle duration somewhere else.

You also should decide on how you are using chords. Is a chord a root Pitch with a chordQuality? or some Pitches crammed together. Or Notes?
A chord could have 3 Notes, each with a different duration. yuck :(

Then our progression. Is it some Playable stuff crammed together? Or do we in fact mean a chordProgression that as a rootChord and a progression (i.e. I-IV-V)? Or should we call it Harmony that has a rootTonality with a progression? lost again.

Depending on what you are building, different needs may arrive. You might also go for an approach where chords and progressions don't exist.

Just Notes that have a Pitch an a Duration.

A tune then is a collection of Notes and some kind of knowledge of when to start what note. We don't need chords here ;)

Or even simpler. We could define a Note with a pitch, start-time and stop-time. Stupid simple.

Your names are wrong

Names are important. They are the most important thing in your software. And defining them is as important.

Personally I would use the following approach:

We then add some factories to aid us in the creation of our objects.

And then used as:

Our ChordFactory could be used as follows:

As noted in other answers, these create methods could be moved into the objects themselves to create a nicer way of coding:

We can then start using our notes and harmonies:

And then finally our HarmonyProgression:

Later on the notations could be factored into an own class. This will give you flexibility in being able to use Tabular, Roman, etc. notations independent of the rest of your application.

I think the fundamental problem with your design is that you're introducing a new type for each way to combine your data types and on top of that making the structure of your songs private.

Imagine if I were making a math library, and I had a type for "simple integers" which are just literals. And then I created a separate type "added integers" for the sum of two simple integers. And then a separate type "multiplied integers" for the multiplication of two added integers. Now on top of that I keep the bit pattern that makes up the numbers a secret so the only mathematical operations that'll ever be possible are the ones hard-coded into my library. That's what you're doing.

I think you could achieve what you want by representing everything as (preferably immutable) sequences of chords and making that sequence public. You can re-implement your generators as plain old functions that duplicate, transform, and glue sequences of chords in particular ways. Alternatively, songs could be lazily-produced streams of chords, which would allow you to generate infinite songs. Either design ends up much simpler and there's no limit to the number of ways you can compose songs.

Try to think in a big problem its always complicated, i try to focus in a small part, you say:

I see a lack of abstraction that generates duplication, you can think in the problem in other way:

You don't need two different classes (melody and structuredMelody) to do the same thing. The melody generators can take care of composing the melody with the right "pieces".

Probably with the same approach you can simplify a lot the rest of the system.

It looks like you have seen (or reinvented) the "composite pattern" somewhere, and now you are throwing it at at all of your main objects (tunes, melodies, progression), without knowing if it is really needed or not ("just in case"). This approach has a high risk of overdesigning things. The current design will allow you to model tree-like hierarchies of tunes, melodies and progressions, for which the tree structure of each is completely independent of each other. Do you really need that for your application? Is it necessary to have a simple tune build up from a

And why do you need a complete "tree of tunes"?

And even if you are convinced you need all those hierarchies, it is definitely not clear why the generator hierarchy needs to follow the composite pattern at all. I guess you will need at maximum one generator object of each, so why not create, for example, a MelodyGenerator class, with just one object instance, which will be used to produce many melody objects (which will be either of type SimpleMelody or StructuredMelody). So if you need a "generateSimpleMelody" and a "generateStructuredMelody" method, make it two methods of the generator class, don't introduce an own class whenever you need just to add another method. A complete tree like hierarchy of MelodyGenerator objects seems IMHO to be pretty useless.

Nonetheless, "form follows function", so I would actually try to implement a part of your application, starting with the most simple possible object model you can think of (Robert Harvey's suggestion sounds well, a Melody with an array of notes maybe enough for the first version of your application), and extend your model whenever your application needs to get a feature you cannot solve with simple collection classes.

After reading the answers posted to this question, I decided to alter my design. This is what it looks like now (simplified): 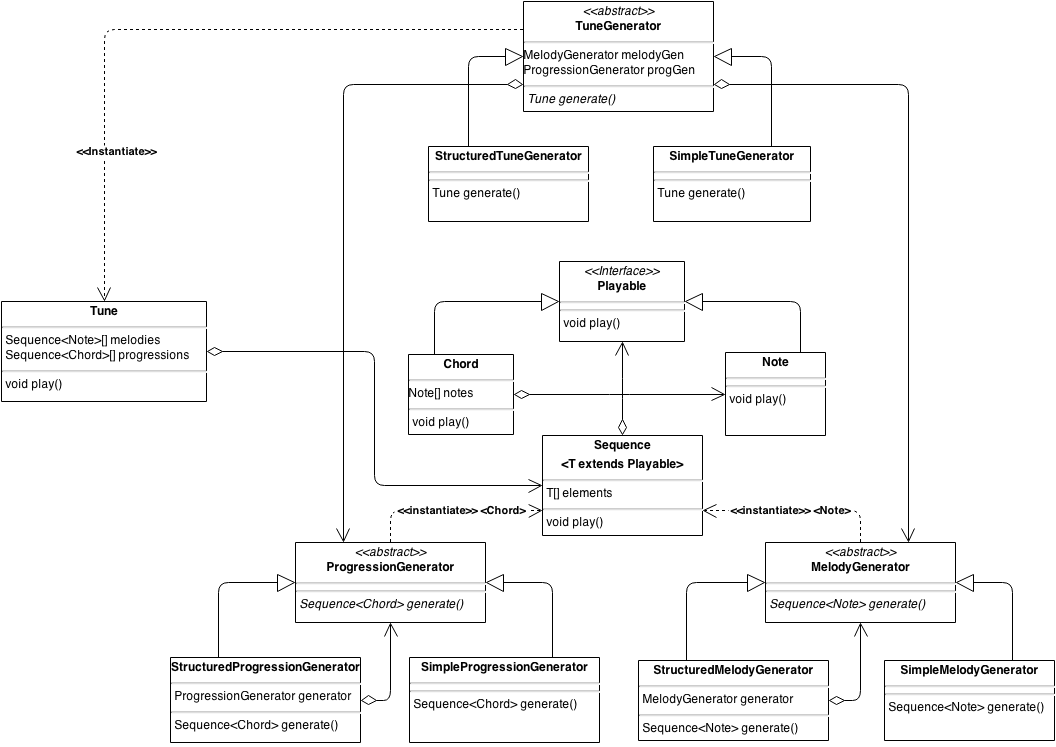 In the previous design, Melody and Progression did almost the same thing, except they were playing different elements: Notes or Chords respectively. Creating duplication.

I realized that I can improve the design by giving Note and Chord a common title: Playable. Than I can have a more general class Sequence that plays Playables.

MelodyGenerator and ProgressionGenerator then both instantiate the same kind of object, a Sequence, only they compose it with a different kind of elements: either Notes or Chords.

Also, I gave up on the recursive-tree-kind-of-thing I had in the previous design, where a StructuredMelody can hold a Melody. No more different kinds of melodies and progressions: everything is just a Sequence.

The different subclasses of MelodyGenerator and ProgressionGenerator simply implement different algorithms to produce the product Sequence.

I managed to improve the design by finding the places where duplication can be eliminated by giving things a more general title: I.e. I realized Progression and Melody are practically the same thing, so I abstracted things be calling them both a Sequence.

Also, realizing the composite pattern in the melodies and progressions was unnecessary helped clear the design.

Thanks for your feedback.

5
Proper OO design for State and Command
1
How do I create a mutually-incompatible type library in Java?
0
How to divide OO project into packages?
1
What is a best design to hold a “global” mutable list?
0
When should I create a base class and subclasses that work similarly, as opposed to a single class?