Algorithms for making image mosaics - is there a quicker way than this?

I've been playing with making image mosaics. My script takes a large number of images, scales them down to thumbnail size and then uses them as tiles to approximate a target image.

The approach is actually quite pleasing: 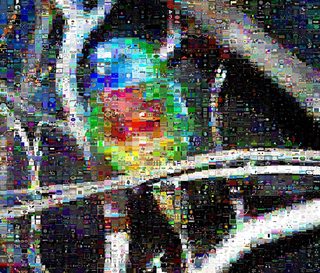 I compute the mean square error for every thumb in every tile position.

At first I just used a greedy placement: put the thumb with the least error on the tile it best fits, and then the next and so on.

The problem with greedy is that it leaves you eventually placing the most different thumbs on the least popular tiles, whether they match closely or not. I show examples here: http://williamedwardscoder.tumblr.com/post/84505278488/making-image-mosaics

So I then do random swaps until the script is interrupted. The results are quite OK.

A random swap of two tiles is not always an improvement, but sometimes a rotation of three or more tiles results in a global improvement i.e. A <-> B may not improve, but A -> B -> C -> A1 may..

For this reason, after picking two random tiles and discovering they do not improve, I pick a bunch of tiles to evaluate if they can be the third tile in such a rotation. I do not explore if any set of four tiles can be profitably rotated, and so on; that'd be super-expensive real soon.

But this takes time.. A lot of time!

Is there a better and faster approach?

I tested out various Python implementations and bindings of the Hungarian Method.

By far the fastest was the pure-Python https://github.com/xtof-durr/makeSimple/blob/master/Munkres/kuhnMunkres.py

My hunch is that this approximates the optimal answer; when run on a test image, all other libraries agreed on the result but this kuhnMunkres.py, whilst being orders of magnitude faster, only got very very very close to the score the other implementations agreed on.

Results were much the same as random swaps and rotations for the Parakeet: 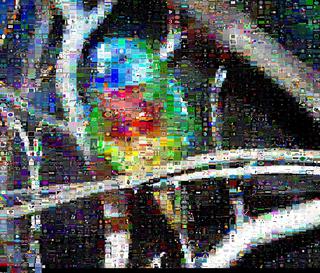 (kuhnMunkres.py on the left, random swaps on the right; original image for comparision)

However, for the Mona Lisa image I tested with, the results were noticeably improved and she actually had her defined 'smile' shining through: 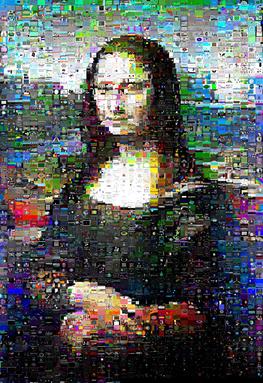 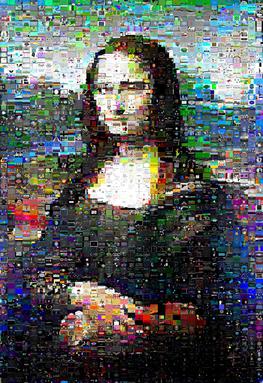 (kuhnMunkres.py on the left, random swaps on the right)

Yes, there are two better and faster approaches.

Then, you can adjust your costs by replacing MSE by a more visually accurate distance, without changing the underlying algorithm.

I'm reasonably sure that's an NP-hard problem. To find a 'perfect' solution you have to try every possibility exhaustively, and that is exponential.

One approach would be to use the greedy fit and then try to improve it. That could be by taking a badly placed image (one of the last ones) and finding another place to put it, then taking that image and moving it and so on. You are done when you (a) run out of time (b) the fit is 'good enough'.

If you introduce a probabilistic element it might yield to a simulated annealing approach, or a genetic algorithm. Perhaps all you're trying to achieve is to spread the errors evenly. I suspect this is getting close to what you're already doing so the answer is: with the right algorithm you may get a better result faster but there is no magic shortcut to Nirvana.

Yes, this is similar to what you're already doing. The point is to forget a magic answer and to think in terms of 2 algorithms: first fill, then optimise.

The fill could be: random, best available, first best, good enough, some kind of hot spot.

The optimise could be random, fix the worst, or (as I suggested) simulated annealing or genetic algorithm.

You need a metric of 'goodness' and an amount of time you're prepared to spend on it and just experiment. Or find someone who has actually done it.

If the last tiles are your problem, you should try to place them early on, somehow ;)

One approach would be to look at the tile that is the furthest away from the top x% of its matches (intuitively I'd go with 33%) and place that on its best match. That's the best match it can get anyway.

Another thing to bare in mind is that in the end you are producing an image to be processed by an eye. So what you really want is to use some edge detection to determine which positions on your image are most important. Similarly, what happens at the very periphery of the image is of little value to the quality of the effect. Superpose these two weights and include them in your distance calculation. Any jitter you get should thus gravitate toward the border and away from edges, thus disturbing a lot less.

Also with the edge detection in place, you may want to place the first y% greedily (maybe until you drop below a certain threshold of "edginess" in the tiles left), so that the "hot spots" are dealt with really nicely, and then switch to "damage control" for the rest.

Not the answer you're looking for? Browse other questions tagged algorithms graphics or ask your own question.

4
Are there any algorithms for resource scheduling of courses-teachers-classes?
9
Does any know of a Algorithm that allows for a figure like this image?
19
What algorithms are there for picking colors for plot lines on graphs?
5
Does anybody recognize this scheduling problem? Is there an algorithm for it?
2
A better way than O(n^2) for traversing a dictionary of dictionaries.
6
Is there an algorithm that performs better than O(n^2) for this unique pair tuple problem?