I'm currently in the early stages of designing an e-commerce application. I'm working out some designs for my classes which have so far been fairly straightforward, but I've run into something of a problem which I suspect is related to the Circle/Square problem. The following (simplified) class diagram outlines what I've designed so far 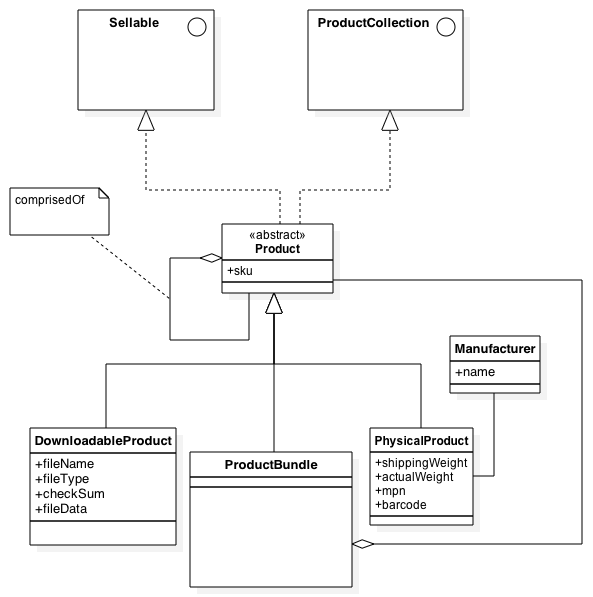 The Product Bundle is where the difficulties are springing up. A bundle of physical products would have things such as the shipping weight being the total shipping weights of all the products that make it up, a stock level equal to the level of the composing product with the least stock, etc. A bundle of downloadable products would have a total file size of all the files that make up the bundle, a file name list composed of all the files in the bundle and so on.

But what about a bundle that comprises both physical and digital products? Suppose for example you want to provide a digital download of a movie when someone buys the same movie on DVD, or you want to give an eBook about the Tour De France away with a bicycle, now there's a mixture of properties that put the bundle in neither the physical or digital product grouping.

I've thought of the following solutions but none seem ideal:

Most of the above approaches would still require the Bundle class to do additional work to determine the types of its constituent parts.

Basically, is there an approach of the ones highlighted above that would be preferable to address these issues, or is there some other approach from these that could be better applied to get a good design that doesn't overload a base class with too much functionality and doesn't leave considerable special cases that need to be dealt with elsewhere? Any input is appreciated.

Domain-Driven Design is (partly) about implementing specific models rather than general ones: a model which solves your particular business problem really well is much more valuable than a model which sort-of-solves lots of problems.

To me it looks like the most general part of your current design (by which I mean the part which is trying to be the most things at once) is the ProductBundle. So let's try to cut its responsibilities down by examining use cases.

If, for example, you're designing a shopping cart system, then you may be better served by a model which accumulates a flat list of items in the cart, and then performs all the calculations (bundles, discounts, and so on) at the checkout, perhaps using some sort of rules engine. ProductBundle may still appear in this design, but only as an implementation detail of the discount engine.

On the other hand, if you are implementing an inventory/warehouse control system which tells you when to order more items, then you might model products as individual SKUs with, say, shipping times, quantities, and so on. ProductBundle may still appear in this design, but in a purely advisory role ("X is in a bundle with Y; you should order them together").

If your system has to fill both use-cases then you need to evaluate the likelihood of friction as the application evolves. (It sounds like you're already experiencing such friction.) You can alleviate this pain by splitting the application up into bounded contexts.

I would expect the bundle class to have 2 lists, I am assuming that the downloadable and physical products are in 2 different tables with 2 different sets of keys. So you can have you 2 separate lists.

I would have a method in the product bundle that returns an object with total digital items, total digital size, total physical items and total physical weight, 0 being perfectly legitimate answers to return and can be filtered out for different display purposes. Though if you prefer you can have one method for each value.

There are several ways to approach this depending on what tradeoffs you want to make.

One such approach would be to have a set of classes that accept a Product and provide different information from it. For example, a ShippingWeightViewAdapter which knows how to get the shipping weight from any Product or subclass, providing an aggregate value where appropriate.

This is a similar approach to some MVC frameworks, e.g. Eclipse. You can have a window that provides information on some object, and another object that adapts it for the view. For example, by filtering compiler errors based on what is selected. If you select an object that is not compiled (e.g. a plain text file) it simply shows nothing.

This approach has several advantages:

There's also a Key-Value approach. Each type of product would have its own set of properties stored as individual key-value items in your database. So you would not have a shippingWeight property as part of a class. Rather, you'd request the 'shippingWeight' value as needed. Some ecommerce systems use this (Magento, I believe) for it's flexibility. The downside is it can be a PITA to work with. But I thought the option worth mentioning to add to the list you presented.

Personally, barring any really good reasons to do otherwise, I'd put the fields into the parent class to keep things simple. The increased storage is unlikely to be a practical problem. But I would move much of the functionality, such as shipping calculations, into other classes like @snowman was describing.

1
Object behaviour or separate class?
25
Why is there no 'subclasses-only' access modifier in Java?
1
If the representation part of type abstraction is declared private, then how does sub-classing violate encapsulation?
1
What is a good Design Pattern for a bundle of methods that comprises an algorithm?
6
How can I add properties to subclasses and access them without casting from a superclass?
2
Lower class count vs explicitness
3
Defining a lot of attributes in a class
0
Base class responsibility
2
Does is break SRP to keep incompatible physical units and quantities together in the same class, where quantities describe an object?