Suppose you have 3 classes: ClassA, ClassB and ClassC. Now suppose you have a class Message. You want a one-to-many relationship between each one of those three classes and the Message.

The goal is that a Message must 'belong' to either a ClassA, ClassB or a ClassC object. A ClassA/ClassB/ClassC object can have zero or many Messages. The Message class is the same for any of the three classes (i.e. there shouldn't be a different class of Message for each of the three Classes A, B and C).

Now thinking about data-modeling on a relational DB (also, I'm using ORM, in this case Entity Framework Code First), I'll map each one of those 3 classes and the Message class to a table.

But then, the issue is trying to apply the relationships I explained above. I see a few ways to do this: 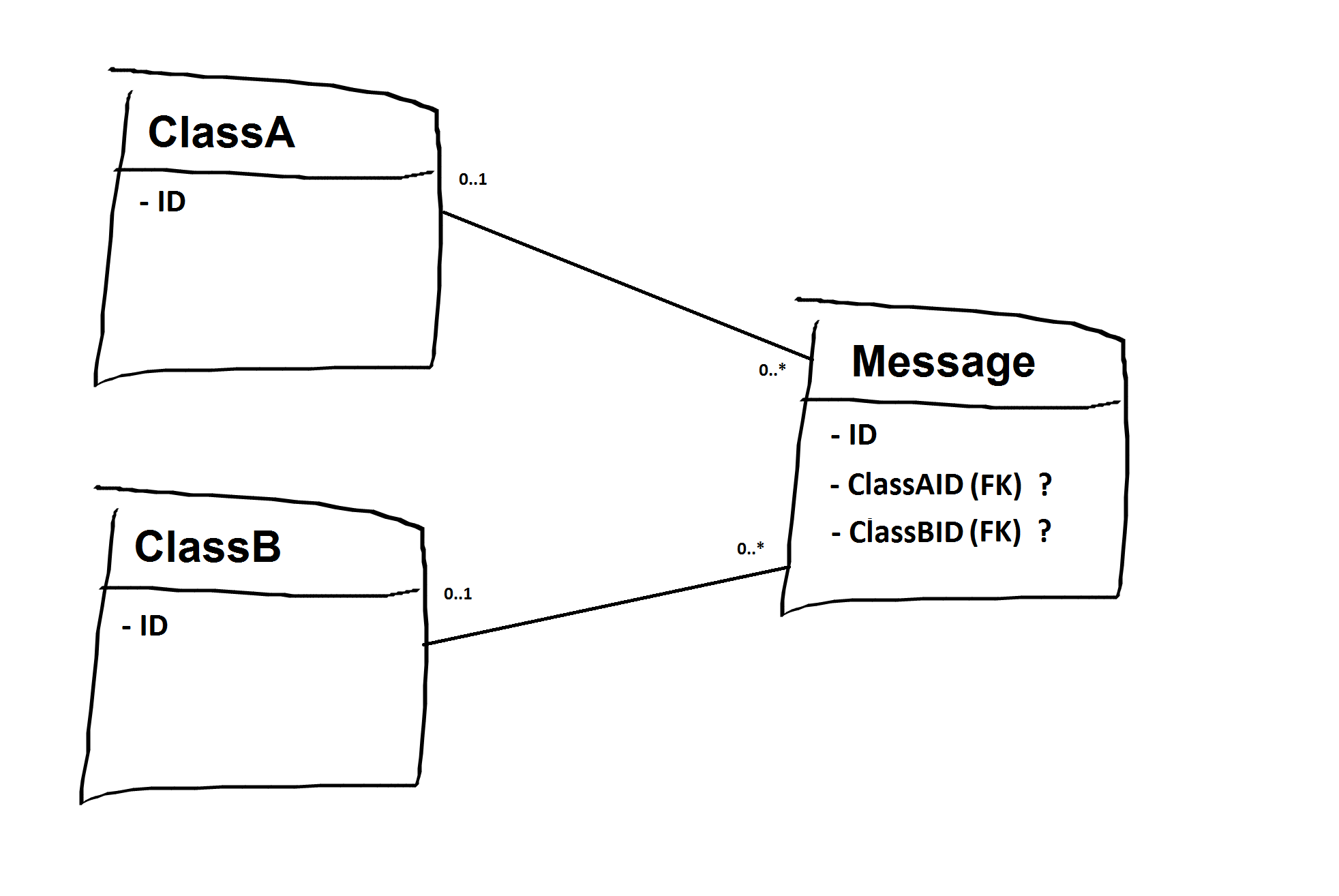 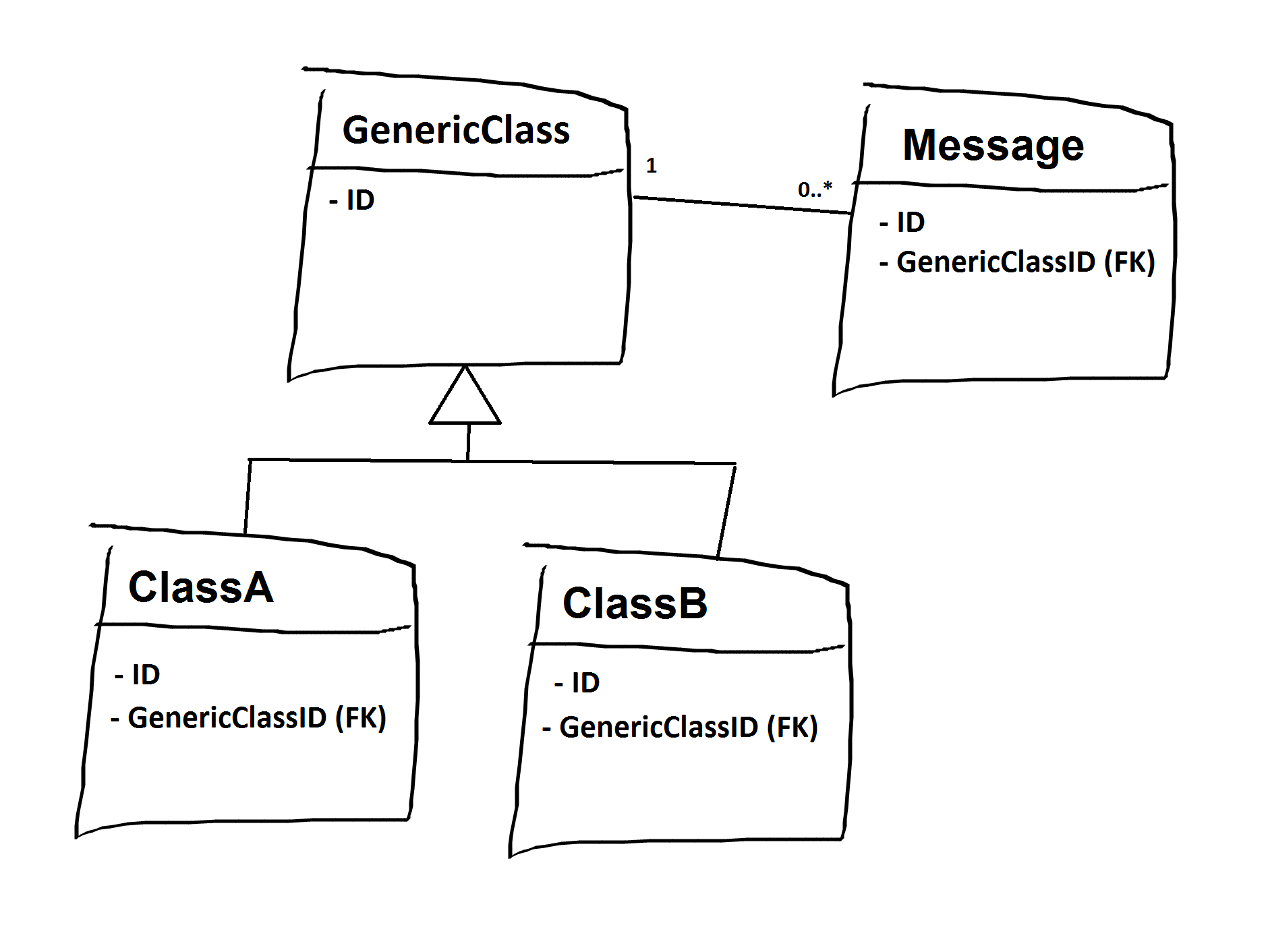 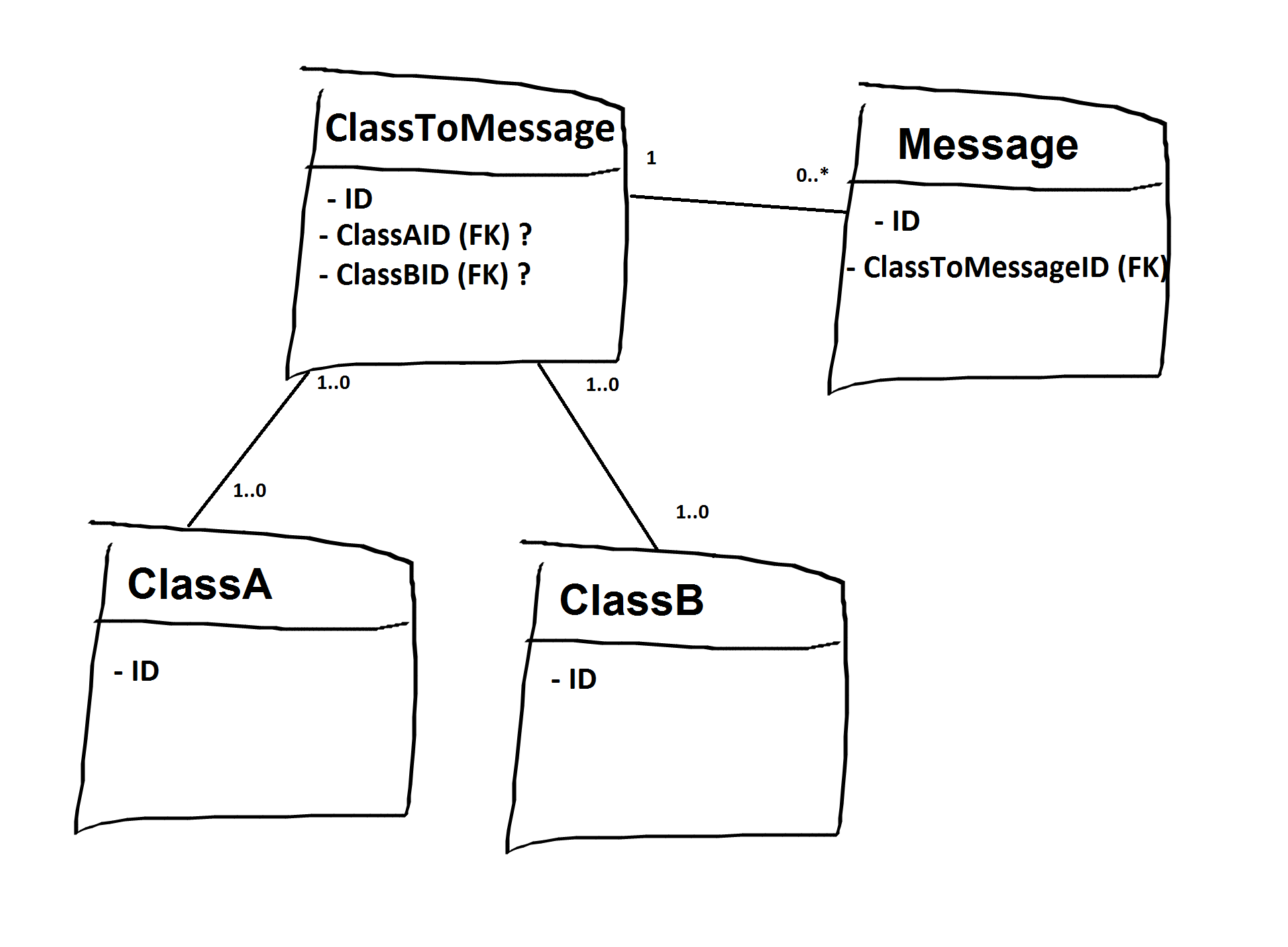 I'd like to know if there's an elegant way to achieve the desired scenario, preferably having the Entiy Framework approach in mind. Thanks in advance.

Imagine the Message objects as being comments (or files) in a tree-like structure of objects (ClassA objects can have ClassB's and ClassB's can have ClassC's...). You want objects from all of those classes to have zero or many comments. You want the same Comment table for all of the comments (doesn't matter if they're belong to a ClassA or ClassB... instance). You also want it to be easy to find out the comments for a given object or the object a comment belongs to. 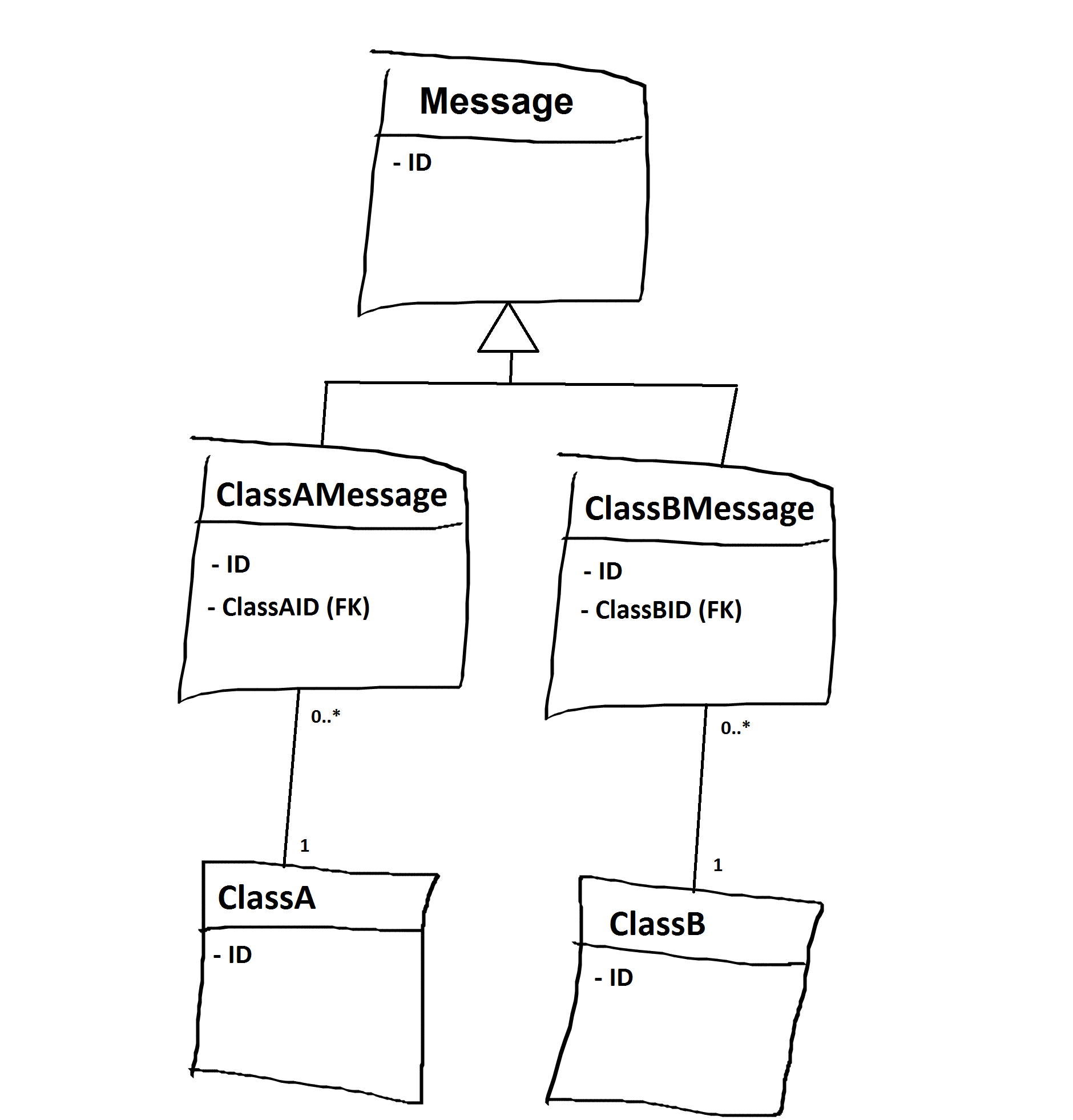 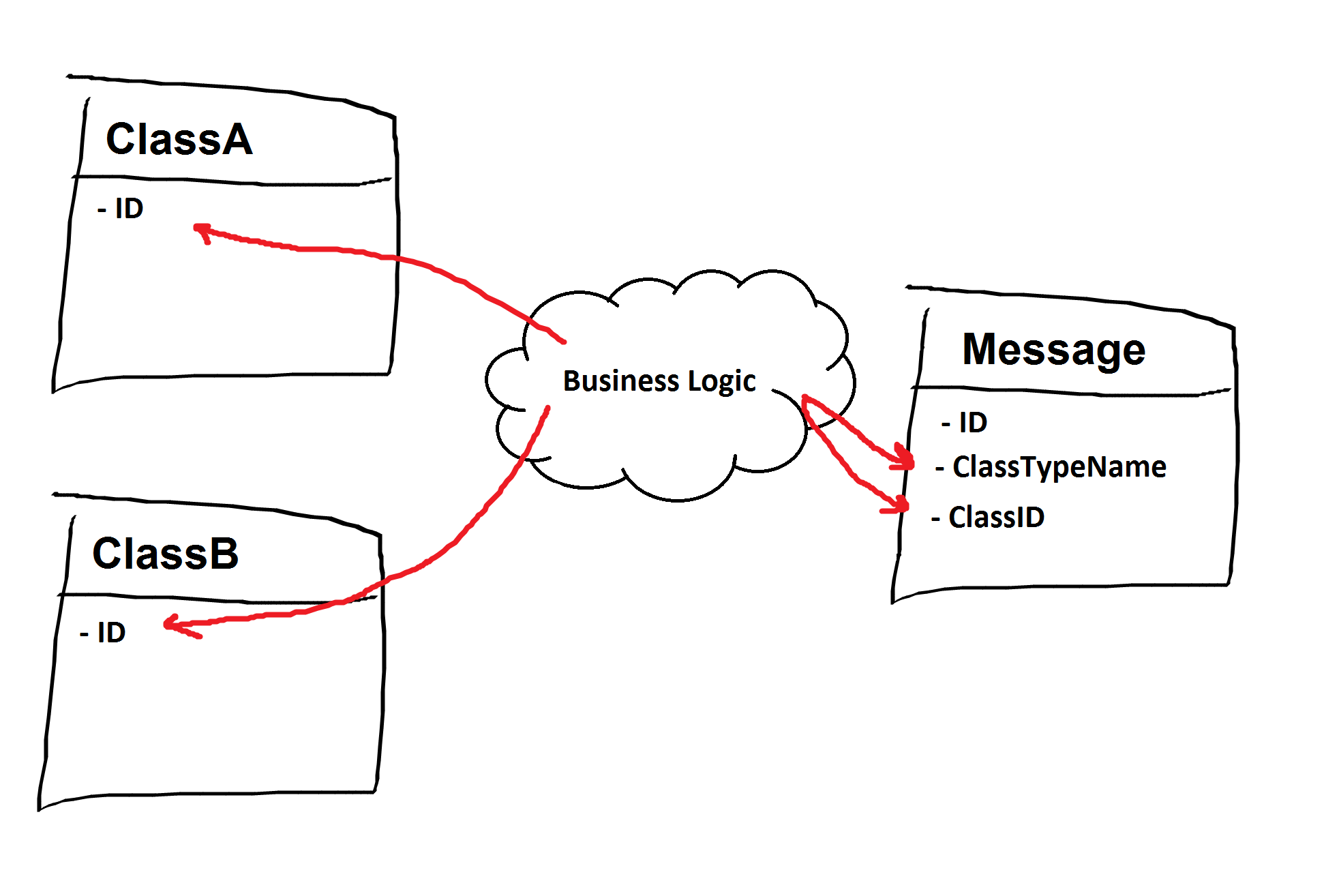 I have seen this issue being addressed in StackOverflow, but I can't seem to find a good solution:

One technique that can be used to good advantage in some cases of class table inheritance is called "shared primary key". See tag wiki in SE.

It makes a difference of what ClassA and ClassB really represent - generic names are not helpful for making good design decisions. For example, if those are things which can or should be modeled with a common base class, with a real "is-a" relationship, go that route.

If ClassA and ClassB have nothing in common except those message, then inheritance is probably not the best approach. For this case, your solution 1 and 3 are both possible. Which one is more adequate depends on how "waterproof" you need your database, and what kind of access patterns and queries you expect.

Going with that last option in your edit but altering it a little.

In this, you abstracted away any changes in concrete class.

In your database however, you are saving the value of an enum that saves which kind of concrete class you are referring to, and what that concrete class' id is. This info can be passed to the factory, which should provide a method returning a genericClass which can be any of the concrete classes based on that previous enum and id.

This way you don't need to worry about needing to add columns for additional nullable foreign keys.

As I've pointed out: you will have to take into account that the database constraints (Foreign Keys) between the Message-class and ClassA, ClassB, ... ClassX cannot be used and should be taken care of manually.

It sounds like you're having exactly the same kind of problem that led to me adopting an object database rather than relational in one of my current projects.

Using an object database, you could simply have Message holding a non-nullable reference to MessageClass object, with ClassA, ClassB and ClassC being subtypes of MessageClass. While this is basically the same as one of your suggestions, the simple fact is that while this is difficult to implement using SQL (and impossible to get correct referential integrity constraints for, if the different classes require different types of data) it is trivial to do in an object database.

I'm using db4o and finding it quite handy for this kind of task.

Not the answer you're looking for? Browse other questions tagged design database database-design orm subtypes or ask your own question.

3
What is the best way to use inheritance with ORMs?
1
Mapping a legacy database to ORM using wrapper classes
6
Should we use data object (or the data transfer object) for sharing data between these three classes?
1
Is self referencing tables a good idea for geographical data?
19
Disadvantages of using a nullable foreign key instead of creating an intersection table
6
How to pass data between objects when an IoC container is being used?
0
How to handle different pages of a web application having different levels of access to a database model
0
Method overriding as a substitution for instanceof in Java?
1
Create object(s) to cater for two data sets that are the same entity but one has an additional element