How to manage coupling in model classes

I'm doing a class diagram for a game project, but I'm stuck on a coupling problem.

The projet is a turn-based game. Two users are playing. They've got units on a map. They play until 1 player has all his units dead or if a predefined number of turns are reached. At each round, each player will review his units one by one: 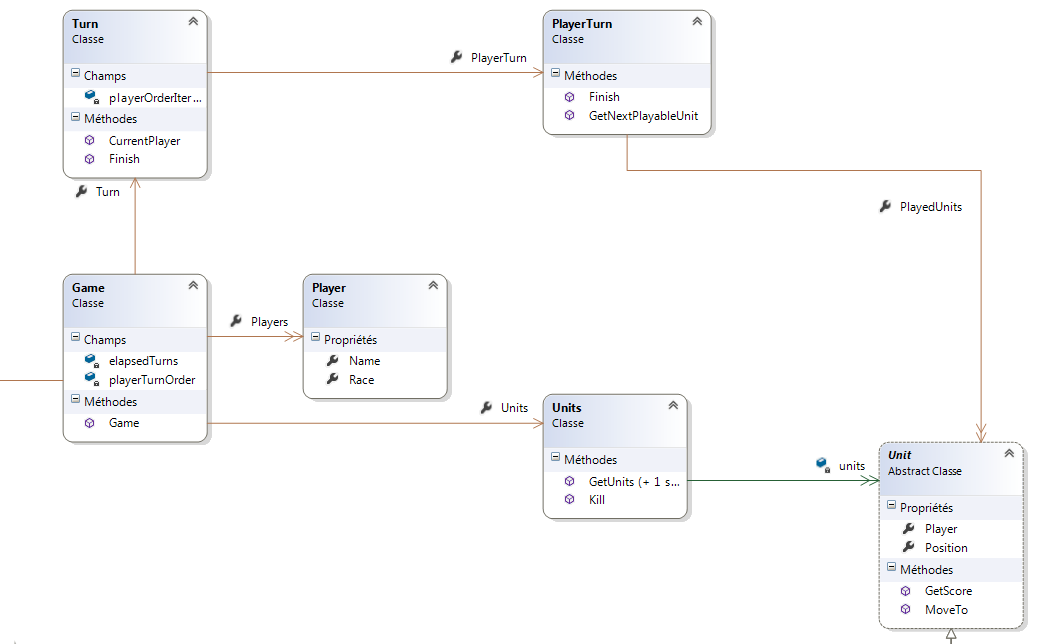 Classes irrelevant to the questions have been cut

The Game class holds all the relevant objects : the players, the units, the current turn (which player(s) have already played, who's next, ...). The Turn object holds a PlayerTurn object, which keeps tracks of which units have already been played, which units are left to play, ...

We'll have to iterate through the current player's units and find one that is not in the "PlayedUnits" list. Therefore, we'll have to call Game.Units.GetUnits with the parameter Game.Turn.CurrentPlayer (Game refers to the current Game's instance).

If the Unit hasn't got any movement point left, we'll have to call Game.Turn.PlayerTurn.Finish which will either select the next playable unit or finish the current player's turn if he already played all of his units this turn.

-> ... There are a lot of other scenarios where we'll need to access other classes' method. E.g., a "Kill" method on Unit will have to check if the current player has still got at least 1 unit alive, and it will have to call a Finish method on Game otherwise.

I think the coupling can't be avoided (correct me if I'm wrong though!). I've thought about two possible ways of dealing with coupling:

When constructing instances of these classes, I could pass the current Game's instance. After all, it makes sense: Unit instances, Turn instances, ... all belong to a game. Then, I could implement the methods GetNextPlayableUnit, MoveTo, Killed, ... easily by using this instance. Somehow, I don't feel comfortable sharing the current game's instance between all the model classes, even though I read here and there that it was the principle of dependency injection.

Is there any other solution you can think of? What would be the best approach in this particular case?

You ask about other solutions. These might be reflections on your process of finding solutions:

To your concern: behavior can be found in several methods Unit.Die() Playfield.RemoveUnit(), Player.KillUnit() at the same time. That is OK. But you want to avoid copy and pasting the code into every method.

About coupling. I think you do/can/must/want not avoid coupling. Some objects should interact. A bad case is when all objects always interact with all other objects in every method. That is too much coupling with no separation of concerns.

And maybe an outdated opinion: OOP is about objects and their interactions, not about classes, not about inheritance.

Not the answer you're looking for? Browse other questions tagged uml dependency-injection dependencies class-diagram coupling or ask your own question.

0
Is there a reason to avoid tight coupling to a model class?

6
Achieving decoupling in Model classes
2
Unit of work/repository pattern with dependency injection advice
6
How can I avoid tight coupling when practically every decision-logic has to check lots of distributed state?
11
Using Python's Method Resolution Order for Dependency Injection - is this bad?
5
Is avoiding having the fields representing the same object in different communicating classes reasonable?
2
Workarounds for putting reference into an object passed as parameter to parent
1
How to design a reassignable global instance that can be referenced by many other classes
2
Tight coupling between parent and children: always to be avoided?
2
Abstract Factory with Pure DI
1
How to configure and setup an IOC Container for a library?