Why were punch cards used for programming

I am doing a research essay on the history of programming languages, and I was wondering, why did programmers ever write their programs on punch cards? Didn't computer screens and keyboards already exist by the time programmers used them?

I know they were first invented for the use of the Jacquard loom and to control the desired design, but when people programmed, why did they decide to write their programs on a card oppose to writing it on a terminal?

Was it because since computers were very expensive, not many people had access to them, resulting in people writing programs on punched cards, submitting it to a company or someone or some organization that had one to run them and tell them the result?

You may not have a very good picture of computing technology pre-1974.

Time-sharing, multi-user, systems were invented in the late fifties, but they were comparatively rare through all through the 60s. Most computers ran in batch mode, running a single program at a time, with no facilities for interacting with users other than the card reader, the line printer, and maybe a separate teletype for the console operator. Terminals you say? Up until the late 60s, electronic terminals with video displays were exotic, fabulously expensive gadgets limited to research facilities and specialized jobs like air traffic control, and national defense. Those computers that did support interactive sessions generally used teletypes. Entering a program on a teletype was just as unpleasant as punching it onto cards

Let me expand a little bit on the problem of batch processing since it so foreign to the way most people use computers now. It would certainly have been possible even in the 50s to write an interactive editing program that would have worked with with a teletype. However, because of batch processing, the editing program would have completely monopolized the computer the entire time you were sitting at the teletype editing your program. Since several hundred to several thousand other people would have been waiting their turn to run their programs, you would have been a very unpopular person. You would also have been charged several dollars a minutes while your editor was running. It was much more cost-effective to write your program out in long hand, hand the final draft to a key punch operator, and let them transcribe your program onto punch cards or paper tape. That avoided wasting the CPU's precious milliseconds waiting for you to type 'GOSUB'.

Hard disk drives were also invented in the late fifties, but they were small (around 1mb), rare, and expensive, not something you gave users casual access to. Obviously users did need some sort of long term storage. The choices were paper tape, punch cards, and magnetic tape. Magnetic tape was new and expensive. Paper tape was used by some systems, but punch cards were an established technology used in non-computer business machines like tabulators and sorters since 1928, so a lot of businesses already had a major investment in punch card machinery and storage.

Punched cards served not only as an input/output medium, but also as a long-term storage device. You could run a program more than once by reloading the card deck for that program. There were no hard drives, no floppy drives, no magnetic tapes.

[W]hy did programmers ever write their programs on punch cards? Didn't computer screens and keyboards already exist by the time programmers used them?

Yes, there were machines with teletypes, and also astonishing things called VDU's. But they were not in the mainstream yet. Both of these technologies were more commonly used by the (mainframe) computer operators; rarely for us.

At the peak of the punch-card era, the most common machine was the IBM029 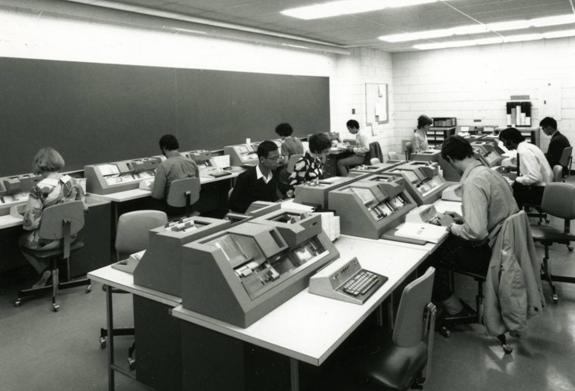 In that image, students are punching in their own code. Professional programmers more commonly wrote their code by hand on coding sheets, formatted according to the language you were coding in. 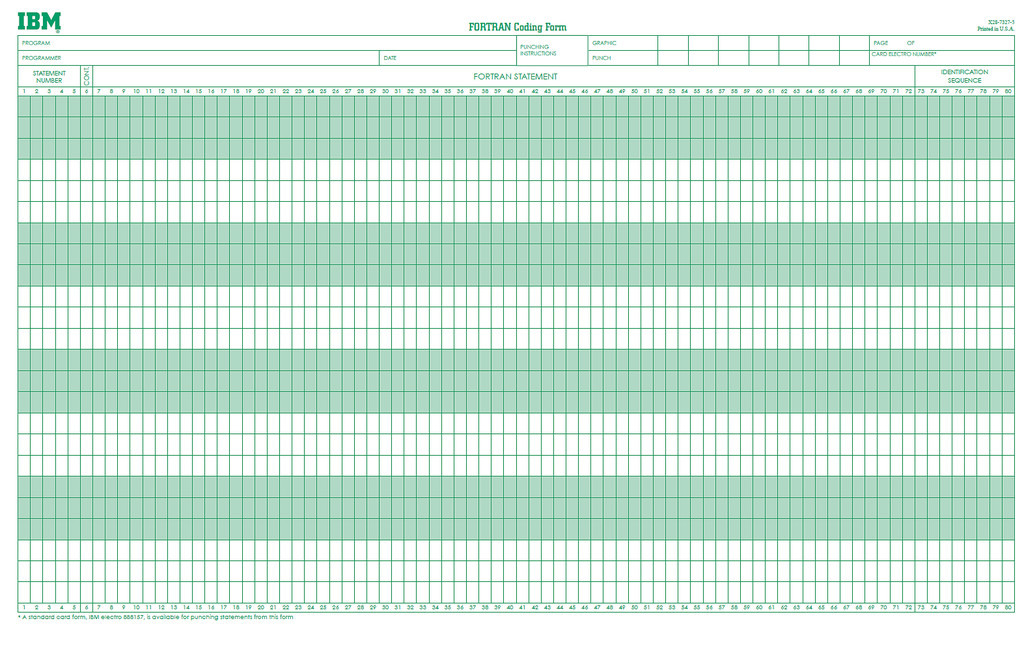 We would send our coding sheets off to the data center, where operators would punch them in (at blinding speeds), and then pass the cards to the verify operator. She (90% of data center staff were women; only their managers were male) would type your code again, with the punch machine set to verify mode. The machine would ding if what she was typing was different to what was on the card already. By doing it twice, they achieved speed and accuracy.

When you got your cards back, the first thing you would do was draw a diagonal line across the top of the entire deck. Woe betide if you dropped your cards before doing that! With line drawn you had a fighting chance of getting your cards back in order after dropping them.

A lot of program editing consisted of inserting new cards, which we would usually punch ourselves, and moving existing cards to another place in the deck. Obviously, the diagonal line you draw originally would now be less useful, so after a few edits, you would draw another line. When the cards were getting too many lines or were starting to produce read errors on the card reader (the fastest readers worked at 1200 cards per minute and higher, so cards took a pounding each time they were read), you would send your deck back to the data center to be duplicated.

Small edits could be performed using a hand punch.

With experience you would learn the Hollerith code for each character, and could punch as fast as using a keyboard.

If no-one senior was watching when you made an error, you could fill the wrong hole with a "chad" that had been punched out of the card, rubbing it with your thumbnail so that it's edges meshed with the rest of the card. Such patches often came loose during the read process, but they often worked at least once. If the chad came out during the read process it would cause a "crash", and the following card(s) would be crushed and crumpled beyond recognition. The card reader would be jolted out of alignment, requiring a Computer Engineer to come and fix it.

In the late 1970's it become more common to load your program to magnetic tape. The tape held your code in fixed-length 80 character records, and we had "librarian" programs to do the editing. As I recall one was actually called Librarian. You would code another card deck to do the editing, or as was becoming more common, use a teletype or VDU to do your editing online. Wow!

The syntax used to drive those librarian editors was very much like the IBM-PC Edlin syntax.

In summary, we use what tools we have available. The newest technology is always the most expensive, and it can take a while before everyone has access to it. It's also a matter of convenience and skills. I am typing this on my laptop, but when writing an email on my smartphone, I use "swype" input, where my finger makes a weird zigzag pattern over a keyboard image and the software works out what word I intend.

Good luck with your essay.

The weight of history...

Lets go back to the Jacquard loom, a mechanical loom invented over 200 years ago.

The loom was controlled by a "chain of cards", a number of punched cards, laced together into a continuous sequence. 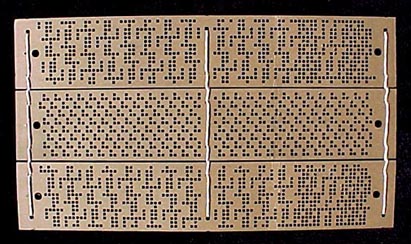 This was a known technology and later on the US Census Bureau used a tally machine - the Hollerith machine to tally census data. Which was collected using punch cards. 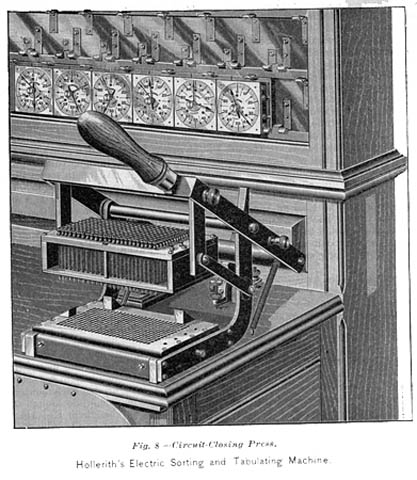 These early tally machines later evolved into computers - but the input method remained the same.

Screens existed, keyboards exists (typewriters), but the idea of hooking those up to a computer? That took some time.

Additionally, punch cards were not just the running program - they were the actual data as well - the storage medium. There were no hard drives, no magnetic tape.

I am so old I have used punched cards (and "editable" mark sense cards - pencil to mark + eraser to edit!) at Uni, and we submitted the deck of cards as our assignment. There was not a keyboard or terminal in sight. And it wasn't that long ago: the 80's.

Where do you think the usage of the term "to punch in data" came from (although, see below)? There was a job title "key punch operator" - essentially a typist that sat at a card punching machine and "punched" in code/data.

IBM still refers to a JCL program as a "deck", and each line has a maximum of 80 characters - why? Because a standard punch card had 80 columns, and on their original computers, the operator would put a deck of cards (a program) in the input hopper to run it. The OS (MVS) was locked (due to IBM's promise of backward compatibility) to an ancient hardware limitation.

Q: What's the difference between a drummer and a drum machine?

A: With a drum machine, you only have the punch the information in once.

Computer time was extremely expensive back then, so anything that could be offloaded typically was.

Computers did not start off as you see them today, obviously. They were more mechanical. A punch card is used to mechanically represent binary numbers. A mechanical reading head which moves over the punch card reads a "hole" or a "no hole". These combinations of holes and no holes can be used to control the behavior of a mechanical device. There by, we have a program to control something!

By the 1970s, IT organizations were at least investigating a move away from punched cards. By the late 1980s or early 1990s, the transition was all but complete.

Punched cards held on for as long as they did, when there were other more efficient storage mediums available, for at least a couple of reasons.

1) They were in use, and inertia is a tough thing to overcome. In other words, "We'd always done it this way."

In the early days the computer system was in a room that was not accessible to programmers and most systems could only execute one program at a time (batch processing). To have your program executed you submitted it via punched cards or paper tape and came back later to get your results which was normally a print out. Programmers were rarely allowed direct access to the 'console', and if they were it was to debug a program, not to write it.

With the advent of preemptive multitasking circa 1965 (see Multics), many users could be supported at once via 'terminals'. In the beginning these terminals were teletype like machines and then later CRT screens with keyboards. These systems were not widely available until the early 1970's.