DDD, modularizing the application and domain layers without breaking the DIP

The application layer is thin in terms of domain logic - it merely coordinates the domain layer objects to perform the actual work.

I add an UML diagram to clarify the problem I see. 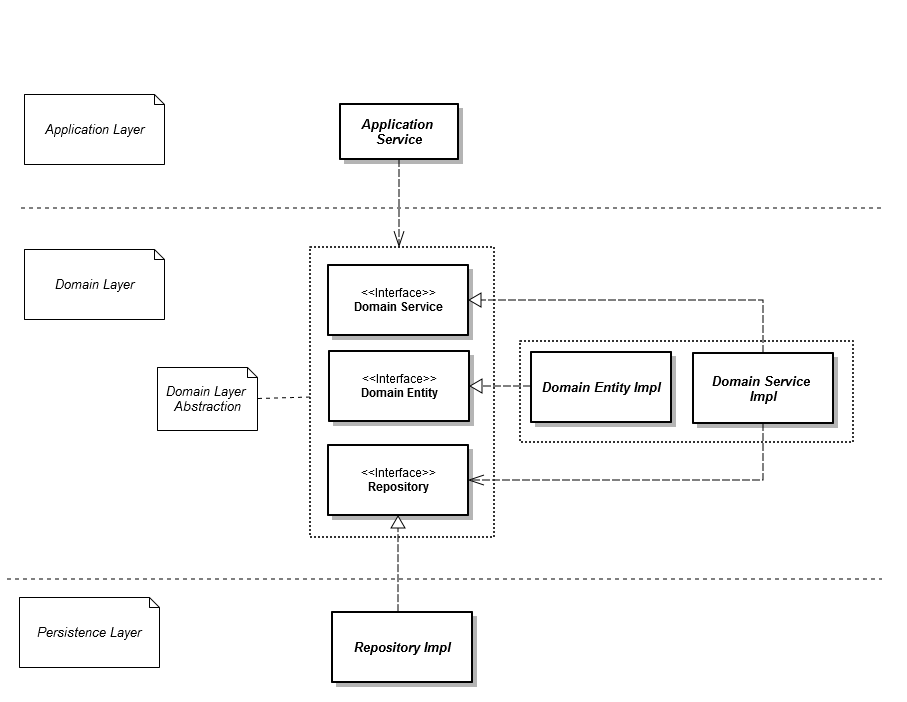 It doesn't break DIP because Domain is the highest level, higher than Application, and doesn't have a dependency on it. The reverse (Domain depending on Application) would break DIP.

Also, the "should depend on abstraction" part of DIP doesn't necessarily apply here, because domain entities can't be abstracted -- they are already a pure conceptual model of your domain. The only exception may be Domain Services, because you could place an interface in front of those.

As a side note, you generally don't need to leverage dependency inversion inside the Domain model itself, because

The Dependency Inversion Principle has one major exception: At some point you must do something concrete. An example is in order.

Let's say you've got a Blogging application. You've got two tables in the database, and two domain models, say Blog and Post. Let's also say you are working with an MVC framework like ASP.NET MVC, Ruby on Rails, etc.

The framework implements the Dependency Inversion Principle by not hard coding the following lines anywhere in its code base:

Now, let's look at the controller. Inside your controller you see new Post() peppered all over. This is not a violation of the Dependency Inversion Principle because at some point you, as a programmer, need to actually save a blog post to the database.

The Dependency Inversion Principle is mainly aimed at dependencies that aren't laser focused on the basic intent of a class, for instance creating a new "controller" in an MVC framework. You don't want a hard coded switch or if statement in order to do that. Authentication is another area where DIP is important because your BlogPostsController class shouldn't care how browser cookies are handled, or if the user logs in using a custom login page wired to a Database, or using Windows authentication or plain text authentication in the browser wired to LDAP behind the scenes.

Of course, as Greg has already pointed out, somewhere in your application you have to wire everything together and actually create non-abstract instances of your Domain Service classes. Either you use a DI framework for this purpose, or you do this manually in a kind of "infrastructure" part of your program, outside of any of the classic "layers". Neither a DI framework, nor a manual start-up infrastructure is relevant in the sense of the DIP.

Cannot yet comment so here we go: Your misunderstanding becomes very obvious if you look at graphs of a "hexagonal architecture". Essentially DDD just wants all your sourcecode dependencies to point "inwards" into your application core, into your domain.

The architecture you layed out does not violate this principle. You merely use the DIP to topple the layers persistence and application, avoiding for the dependency to point "downwards".

Not the answer you're looking for? Browse other questions tagged domain-driven-design patterns-and-practices solid layers architectural-patterns or ask your own question.