I'm trying to choose a Git workflow that is most appropriate for our product. Here are the parameters:

So far, here's the way I think it could work:

I have a few concerns:

Comments are appreciated on things I may have overlooked or better ways of accomplishing things given the requirements I've specified.

There's no specific reason why you cannot keep release branches alive in GitFlow after a release is out, other than the fact that coordinating changes between multiple diverging branches for a long time is hard with any model. I suppose GitFlow was also modeled more for products that maintain a single live release while developing the next.

I would stick with GitFlow and make a few amendments;

Skip the master branch. I've had no practical use of it so far, and it would lose its linearity the way you work. Keep development on the next major release on develop. If you decide to keep master, don't put release tags on master, put them on the last commit on the release branch that produced the binary you're shipping.

If you must be working in parallel on features for several future major releases at the same time, perhaps you have to keep the next one (13) on develop and anything for later versions (14, 15) on additional "develop-N" branches. That does seem very hard to maintain in general, but would be possible.

It seems that a possible solution for your main problem («We need to be able to work on multiple releases at the same time [...]») is dooing a git worktree add <path> [<branch>]

A git repository can support multiple working trees, allowing you to check out more than one branch at a time.
With git worktree add, a new working tree is associated with the repository.

See this SO answer for a detailed introduction on git worktree.

You mentioned that you are familiar with gitflow. I suggest to addopt it for your scenario. You will need to create branches from your development branch to support older versions. These older versions will also need to have their own release/master branches and hotfix branches. You will need to periodically merge your support branches into the newer support branches and the develop branch.

As the development of the major versions diverges this will keep getting harder. There is no silver bullet for this. Sometimes it will be easier to make changes manually. The cost of maintaining the older versions will increase, and at some point it won't worth it anymore.

It all depends an what kind of changes you are making in your older versions. If only bugfixing, thats relatively easy to merge. If you try adding new features, that will be hard.

I’ve been looking at “A stable mainline branching model for Git” which I think has the potential to solve this problem nicely. 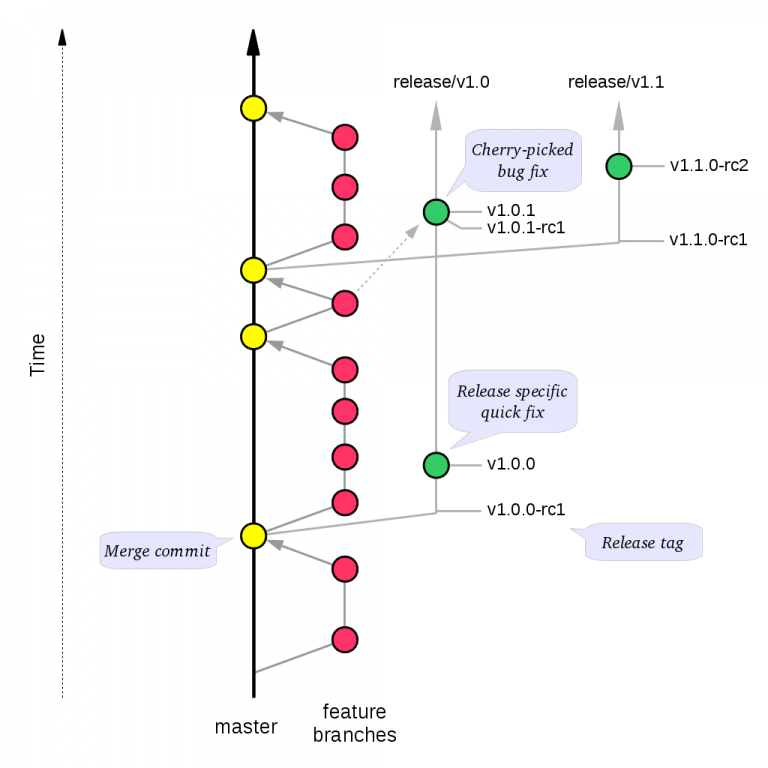 The article has a lot more detail about different scenarios with this model and how to solve them.

Not the answer you're looking for? Browse other questions tagged version-control git or ask your own question.