Structuring data to represent a tree with squirrels

What I want to represent

Let's assume I have several schemas of the following kind: 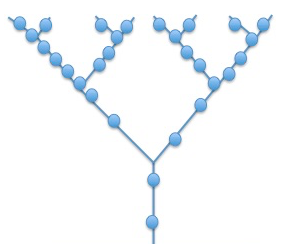 It is a tree on which positions of squirrels are represented by a blue dot. The number of bifurcations differ from one tree to another, the number of squirrels varies from one tree to another, the positions of the squirrels vary (and are on a continuous scale), all trees are not necessarily symmetric (unlike the picture) and the length of the branches differ (on the picture the length of the second branches are all the same, the lengths of the third branches are all the same. This is not necessarily always the case).

Another solution would be to have two sets of vectors and one set of points. The first set of vector describes the positions of each squirrel relative to the bottom-left corner, another set of vector defines the the length and direction (although we don't directly need this info) of each branch and the set of points indicate where the starting points of the vectors describing the branches. It really doesn't seem to be a good idea; it is too descriptive (too much info) and is not very handy for making the kind of calculations I need to perform afterward.

I feel like I focus too much on the picture and have a hard time realizing how the informations I need could be coded/stored. Can you help me with that?

First bifurcation results in branches "1x1" and "1x2" counting from the left.

So the top rightmost branch in your tree is labeled "1x2x2x2".

Squirrel position is more problematic but I would suggest a simple distance from the beginning of the branch.

The classic way to store a tree in a database is to use a self-referential table. If you take James Anderson's branch table and add an optional parentBranchID field, you are there. The only branch with a null parentBranchId will be the root node.

Similarly, read the whole table into memory using branch classes that have both a parentBranchID and a parentBranch instance pointer. The class will also need a collection of squirrels - this can be created (in Java) by an OR tool like myBatis or Hibernate.

Iterate over the list of classes, creating the parent pointer linkages, and populating a list of child branches in each branch. You now have an in-memory tree that can be traversed in both directions.

Finding the distance between 2 squirrels is likely a two-step process.

Not the answer you're looking for? Browse other questions tagged database-design data-structures information information-presentation structured-programming or ask your own question.