I do a bit of solo game development and always get stuck on some part of the architecture where I can't decide what the best way to tackle a problem is. I've just run into a good architecture problem, and I'm hoping I'll be able to use lessons learned from it down the road. I'll abstract it down a bit to a theoretical problem:

The core class for gameplay is called GameplayCore. My GUI is all contained in an HUD class, and the enemies are all controlled by an EnemyManager. The Player class contains the player's health. GameplayCore creates and stores the HUD instance, EnemyManager instance, and Player instance.

Obviously I want to separate the UI code from the functionality code. So say on the GUI side I've got HealButton, StunButton, and HealthBar classes that define the appearance and behavior of those controls. On the functionality side, I've got the Player class with a health property, an AbstractAbility class that defines shared ability behavior including cooldown, and the HealAbility and StunAbility classes that extend it to define concrete implementations.

Here's where things start to fall apart. I want to be able to change the appearance of the buttons as their cooldowns elapse. I want the cooldown code to be self-contained in AbstractAbility, so HealAbility and StunAbility need references to their corresponding buttons. Now I need to pass those references back from HUD to GameplayCore and then into the constructor of AbilitySet so they can be passed into the constructors for the ability buttons. HealAbility needs references to the HealthBar (in HUD) and the Player (in GameplayCore). StunAbility needs a reference to EnemyManager so it can retrieve the collection of enemies to loop through and stun them. But HUD needs references to the HealAbility and StunAbility so it can call them when the buttons are pressed.

Everything has gotten pretty tangled; there is too much coupling and I'm honestly not sure where the best place to construct the ability classes is. I'm very tempted to merge all of the ability code into the ability buttons, which would greatly simplify everything, but then I'd have important functionality code mixed into a UI class.

What's a good organizational approach to this problem? What are some good architectural strategies I could use to keep the code from getting too tangled? Is my entire approach heavily flawed?

edit: I should note this particular project is in ActionScript 3, which does include an event system (with its own quirks and limitations).

I have actually written a large scale game gui that implements (among many other things) precisely those actions that you are talking about. The way it worked is that the gui was completely separated from the game logic, so you could, in theory, play the game without the gui, or instantiate two guis on the same gamelogic. Nobody ever tried that, but it was theoretically possible, and the fact that it was possible reveals an important characteristic of the design:

The gui must know the gamelogic.

The gamelogic should know absolutely nothing about the gui.

The way this is accomplished is by making everything in the gamelogic observable, and making the gui register various observers to receive notifications from the gamelogic.

So, when the user clicks the button, the button tells the gamelogic to perform the corresponding action.

The action does whatever it is supposed to do, and then it sets its own time-to-unblock to 100%. Since the state of the action object has now changed, it issues a notification to that effect.

The gui has registered with the gamelogic to receive events about the action, so it receives this notification, it retrieves the new state of the action, and it paints the button as fully disabled.

Then on the next tick (the next iteration of the main loop of the game) the action reduces the time-to-unblock to, say, 95%, and issues another event about that change.

The gui receives this event and repaints the button to show it partially disabled. And so on, and so forth.

As Stephen suggested in his comment, you could use the observer Pattern to connect the different parts of your application.

However, this is a rather static approach, and you will have to implement interfaces everywhere and the dependencies are still strong. Since this is a game, your structure, logic and gameplay might will change over time.

I'd recommend using an event-based approach. It works similar to the Observer, with the difference that neither the sender nor the receiver know about each other (no explicit "notify").

You'd simply fire an "HealthChanged"-event, and every component that is interested will just act accordingly. You can achieve this by using an Event bus.

If you want to make the program really un-coupled and flexible, you might consider using the event mechanics together with an Entity system

It's a component-based approach: Instead of having a health attribute in the player class, the player would be defined by it's components : Health, Attack and Position (or whatever else).

Since I'm not sure if this might be too much overhead for a free-time-project like yours, I won't go into much detail here. But you can check the above link and more detail here

Obviously I want to separate the UI code from the functionality code.

That said, if you want to keep it decoupled, you could simply "map/associate" the GUI code to a given ability type, like "StunWidget" to "typeof(StunAbility)", like so:

The mapped widget automatically gets passed the ability instance when it is constructed for a given ability type.

Then when you have a unit selected, you can loop through the abilities available using something like reflection for that unit and create/insert/display the associated GUI controls (given its ability type as key to find the associated ability type widget) for each ability. Then the widget becomes responsible for activating the ability, targeting it if it requires targeting, displaying the cooldown, etc, maybe with a matrix-like display as in Starcraft showing what you can do with the unit: 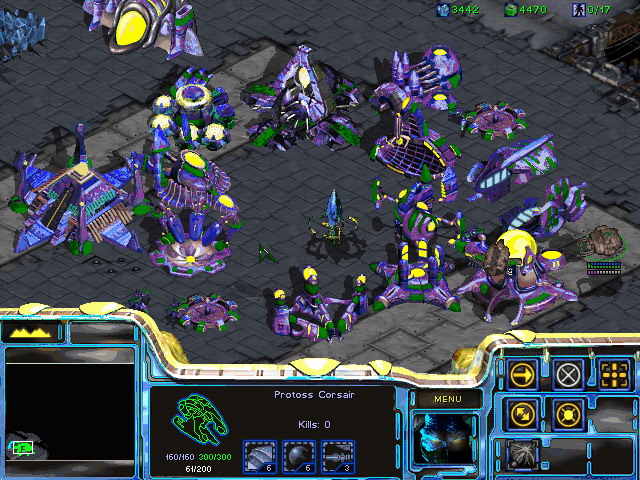 I love that 3x3 matrix design for the GUI in Starcraft 1, never presenting more than 9 hotkeyable controls to the user at once. I think it's one of the most optimal workflows for a game that allows selecting multiple units, like an RTS or RPG where you have multiple party members you can select individually (including TRPGs). I think the effectiveness of such a design reveals itself through the players who can perform hundreds of actions per minute under such a workflow.

Not the answer you're looking for? Browse other questions tagged architecture game-development or ask your own question.

1
Polymorphism and passing
11
Alternatives to multiple inheritance for my architecture (NPCs in a Realtime Strategy game)?
3
Share some fields but others unique to owner of instance
1
Abilities interacting with aspects of other abilities - how to implement efficiently
1
Actions that can have individual cooldowns or a "group" cooldown
5
Domain Driven Design approach for game
0
Card game with unique abilities - how do i implement this
0
How can independent game-modules block system-wide behaviour
3
TDD: Create a Game logic using Test-First Programming