What is a peer in computer network?

A five-layer network is illustrated in Fig. 1-13. The entities comprising the corresponding layers on different machines are called peers. The peers may be software processes, hardware devices, or even human beings. In other words, it is the peers that communicate by using the protocol to talk to each other.

I don't understand what a peer is, because the usage of English word "comprising" can be ambiguous ( A whole comprises parts. Parts comprise a whole.)

Can you point/circle out what part in Figure 1-13 is a peer?

Are a peer and a host in the figure the same concept? 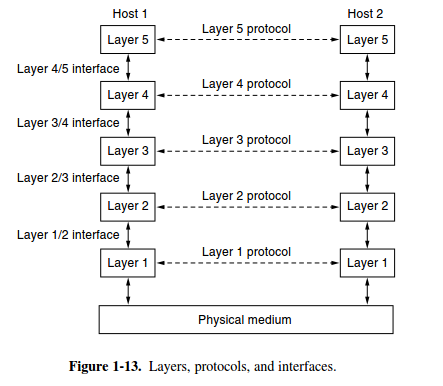 Note that it is commutative, so for example,

But to make sure you don't misunderstand, a peer is not always a layer. If I talk to you on a telephone, you and I are peers in that communication.

However, in the same example, I am not a peer with your mobile phone because we are on different levels.

I hope this clears it up.

A peer is something or someone that is an equal member of a group, where there's some kind of relationship between the members of the group. For example, "a jury of your peers" means people with the same (legal) status as you.

For networking and distributed systems; a lot of it is either "client server" (HTTP, FTP, NTFS) or "hierarchical" (NTP, NNTP, DNS); where a client and server are not peers because they aren't equal, and where clients communicating with the same server aren't necessarily peers because there may not be a relationship between the clients.

For the diagram you've posted; from one perspective it's impossible to know what the protocols are and therefore not possible to say if the hosts are peers or not (e.g. Host1 could be DHCP server and Host2 could be DHCP client, and in that case they wouldn't be equal and couldn't be considered peers).

However, from a different perspective (at the physical layer) it's extremely likely that the hosts are considered equals (regardless of which higher level protocols are being used) and from that perspective the hosts would be considered peers.

Peer is a node that provides the similar functionality as others.

actually peer is an end user in a network, whether it may be a phone network or an Internet network, the end device to which service is delivered is called a peer.

Not the answer you're looking for? Browse other questions tagged networks or ask your own question.

3
Massive vehicular network simulator
3
Which programming guidelines for a chess network application?
14
What did network programs use to communicate before sockets was invented (around 1983?)
1
Estimating file transfer time over network?
0
How best to implement a local-area peer to peer network
3
What is the most efficient way to discover devices on a network?
6
Why is it called network "topology"? Why not network "graph"?
2
How do network loops actually "catch" connections reliably?
0
Network Communication - queue processing thread/task or?