What level of a computer system does firmware run on?

In the following levels of a computer system, on which level does firmware (e.g. BIOS) run? 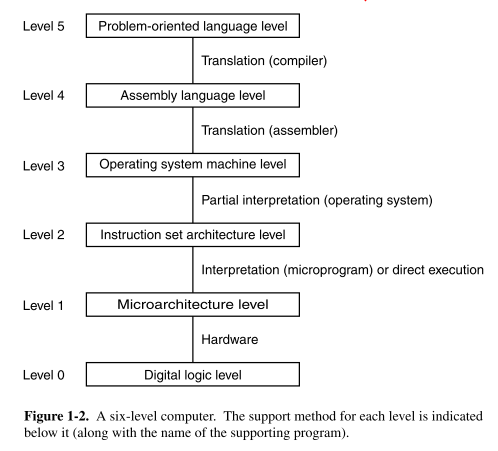 Firmware doesn't really fit into that hierarchy. Firmware is really just a place where a library of machine code (in the sense of level 2) is stored. Often the code stored in firmware is for the management of the motherboard and IO channels, but it need not be. I've got an old Tandy laptop that has Multiplan, a text editor, a BASIC interpreter, and a calendar in firmware.

I'm not quite sure if the image is accurate enough to expose such details as Firmware. For example the top 2 levels usually happen well before rest, the OS is not interpreting the program in usual sense of the word... unless we mean loader etc.

In the end the model does not have straightforward mapping to a 'real life' computer - I would even consider it more as a model of computation contracts then of computer as physical machine. There are some gaps between those two - for example virtually no OS is interpreting the program - it's done in silicon/by microcode directly while OS is handling error conditions and syscalls with ISA sitting in between microcode and both OS and program.

Depending on what you mean by of firmware, you may get different answers:

Firmware is software that runs on Read-Only Memory (ROM) or something similar. Firmware is firmer than software because software can be changed somewhere along the chain from where it is stored in some Read-Write media and loaded into writable memory and executed from there.

As time marches on, the lines between software, firmware, hardware get blurred more and more.

Not the answer you're looking for? Browse other questions tagged architecture firmware bios or ask your own question.

3
Architectural considerations for a new black box program
1
What are the languages, objects, data types, operations and features for lower levels in a multilevel model of a computer system?
1
What does “issue or start an instruction” mean?
1
Instructions in ISA and microinstructions?
3
Differences between Instruction set (architecture) and machine language?
4
Where and when does firmware of a device run?
66
Which programming language is used to write a BIOS program?
1
What is involved in compiling or interpreting machine G-Code?
0
What is an application client?