I'm asking this question because I am confused about one aspect regarding big O notation.

I am using the book, Data Structures and Abstractions with Java by Frank Carrano. In the chapter on the "Efficiency of Algorithms" he shows the following algorithm:

He initially describes this algorithm as having a growth rate of (n2 + n)/2. Which looking at it seems intuitive.

That last one is not similar at all. In fact, quite obviously, it's twice as much as the middle one. So how can Frank Carrano say they are similar? Also, how is the algorithm classified as O(n2). Looking at that inner loop I would say it was n2 + n/2

When calculating the Big-O complexity of an algorithm, the thing being shown is the factor that gives the largest contribution to the increase in execution time if the number of elements that you run the algorithm over increases.

The definition is that

if there exists some constant C > 0 such that, for all n greater than some n_0, we have

When talking about complexity, you're only interested in the time factor changes based on the number of elements (n).

As such you can remove any constant factor (like the 2 here).

Now, for a reasonable large n the product, i.e. n * n, will be significantly bigger than just n, which is the reason you're allowed to skip that part as well, which leaves you indeed with a final complexity of O(n^2).

It is true, for small numbers there'll be a significant difference, but this becomes more marginally the bigger your n becomes.

They grow similarly, which is what Big O Notation is about.

It just looks like you need to work out the big O notation a bit more. How convenient this notation is, it is very misleading because of the use of an equal sign, which is not used here to denote the equality of functions.

As you know, this notation expresses an asymptotic comparisons of functions, and writing f = O(g) means that f(n) grows at most as fast as g(n) as n goes to infinity. A simple way to translate this is to say that the function f/g is bounded. But of course, we have to take care of the places where g is zero and we end up with the more robust definition that you can read almost everywhere.

This notations turns out to be very convenient for computing – this is why it is so widespread – but it should be handled with care as the equal sign we see there does not denote an equality of functions. This is pretty much like saying that 2 = 5 mod 3 does not imply that 2 = 5 and if you are keen on algebra, you can actually understand the big O notation as an equality modulo something.

Now, to go back to your specific question, it is totally useless to compute a few numeric values and compare them: however large one million is, it does not account for asymptotic behaviour. It would more useful to plot ratio of the functions f(n) = n(n-1)/2 and g(n) = n² – but in this special case we can readily see that f(n)/g(n) is smaller than 1/2 if n > 0 which implies that f = O(g).

To improve your understanding of the notation, you should

Algebraic side note If A is the algebra of all functions Ν→Ν and C the subalgebra of bounded functions, given a function f the set of functions belonging to O(f) is a C-submodule of A, and computation rules on the big O notation just describe how A operates on these submodules. Thus, the equality we see is an equality of C-submodules of A, this is just another sort of modulus.

I think you misunderstand what the big O notation means.

While the complexity gives us a way to predict a real-world cost (seconds or bytes depending on whether we are talking about time complexity or space complexity), it doesn't give us a number of seconds, or any other particular unit.

It gives us a degree of proportion.

If an algorithm has to do something n² times, then it will take n²×c for some value of c that is how long each iteration takes.

If an algorith has to do something n²÷2 times, then it will take n²×c for some value of c that is twice as long as each iteration takes.

Either way, the time taken is still proportional to n².

Now, these constant factors are not something we can just ignore; indeed you can have the case where an algorithm with O(n²) complexity does better than one with O(n) complexity, because if we are working on a small number of items then impact of the consant factors is greater and can overwhelm other concerns. (Indeed, even O(n!) is the same as O(1) for sufficiently low values of n).

But they are not what complexity tells us about.

In practice, there are a few different ways we can improve the performance of an algorithm:

Or to look at it another way, we've got f(n)×c seconds being taken and you can improve performance by reducing c, reducing n or reducing what f returns for a given n.

The first we can do by some micro-opts inside a loop, or using better hardware. It will always give an improvement.

The second we can do by perhaps identifying a case where we can short-circuit out of the algorithm before everything is examined, or filter out some data that won't be signficant. It won't give an improvement if the cost of doing this outweighs the gain, but it will generally be a bigger improvement than the first case, especially with a large n.

The third we can do by using a different algorithm entirely. A classic example would be replacing a bubble sort with a quicksort. With low numbers of elements we may have made things worse (if c₁ is greater than c₀), but it generally allows for the biggest gains, especially with very large n.

In practical use, complexity measures allow us to reason about the differences between algorithms precisely because they ignore the matter of how reducing n or c will help, to concentrate on examinging f() 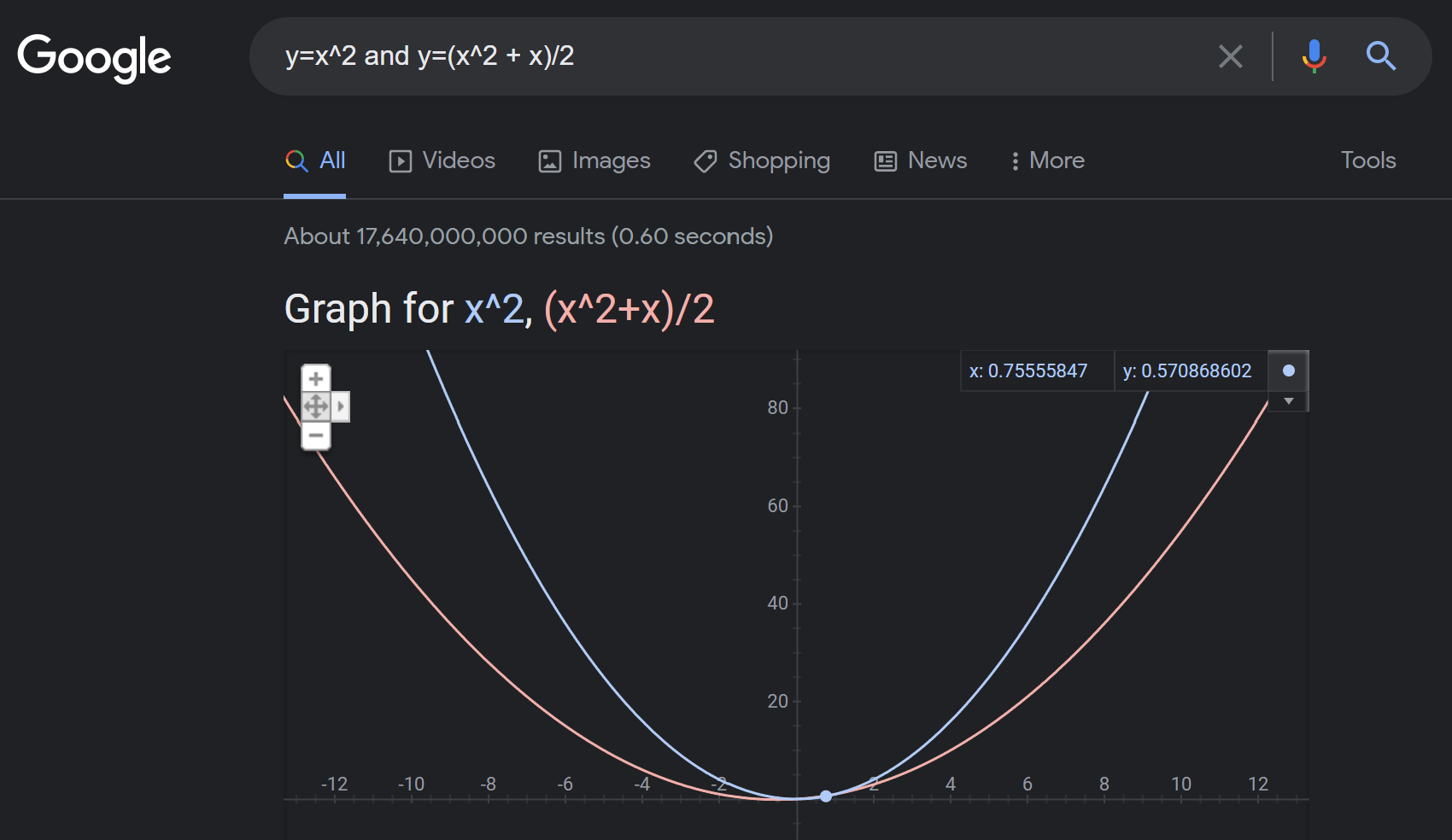 The point of big O notation is that you can choose an arbitrarily large constant factor so that O(function(n)) is always larger than C*function(n). If algorithm A is a billion times slower than algorithm B, then they have same O complexity, as long as that difference doesn't grow when n grows arbitrarily large.

Let's assume a constant factor of 1000000 to illustrate the concept - it's a million times larger than neccessary, but that illustrates the point that they're considered irrelevant.

Big-O is all about "how complicated" an algorithm is. If you have two algorithms, and one takes n^2*k seconds to run, and the other takes n^2*j seconds to run, then you can argue about which one is better, and you might be able to make some interesting optimizations to try to affect k or j, but both of these algorithms are dead slow compare to an algorithm that takes n*m to run. It doesn't matter how small you make the constants k or j, for a big enough input the n*m algorithm will always win, even if m is quite large.

So we call the first two algorithms O(n^2), and we call the second O(n). It nicely divides the world up into classes of algorithms. This is what big-O is all about. It's like dividing vehicles up into cars and trucks and busses etc... There's a lot of variation between cars, and you can spend all day arguing about whether a Prius is better than a Chevy Volt, but at the end of the day if you need to put 12 people into one, then this is a rather senseless argument. :)

1
BIG O - Algorithm Case Analysis
31
Is this a Proper "Rule" for Identifying the "Big O" Notation of an Algorithm?
6
How meaningful is the Big-O time complexity of an algorithm?
0
Big-O of this algorithm?
0
Big O notation for the algorithm
1
What's the big-O complexity of this recursive algorithm?
1
How to compare two objects for percentage of equivalence
20
Using a different algorithm depending on the size of the input