Ask Question
Asked 7 years, 1 month ago
Modified 11 months ago
Viewed 31k times
49
Closed. This question is opinion-based. It is not currently accepting answers.

It's been almost 5 five years since I asked this question, the web development world has drastically changed. Now I am convinced that FormsAuthentication IS obsolete.

Yes. FormsAuthentication is deprecated in MVC 5 and onwards.

At least, that's the short answer.

The long answer is that pre-MVC 5 traditional FormsAuthentication is still ok to use. It is, however being phased out in favour of alternative approaches such as ASP.NET Identity.

In Visual Studio 2013, the authentication options supplied for and MVC 5 application are as follows:

In this case, Individual User Accounts is referring to ASP.NET Identity.

According to Microsoft, the former ASP.NET Membership has been replaced with ASP.NET Identity,

[ ... ] the sample application will be configured to use ASP.NET Identity (formerly known as ASP.NET membership)

The new membership system is based on OWIN rather than the ASP.NET Forms Authentication module.

A type of FormsAuthentication still exists though. According to Microsoft,

ASP.NET also has a forms authentication support through the FormsAuthenticationModule, which, however, can only support applications hosted on ASP.NET and doesn't have claim support. Here is a rough feature comparison list: 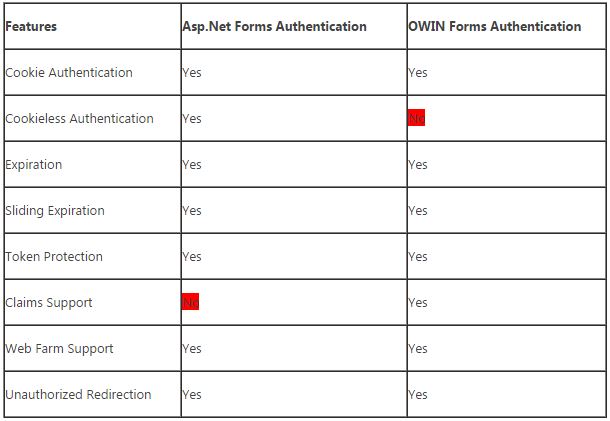 So if you'd still like to use FormsAuthentication, check out Understanding OWIN Forms authentication in MVC 5.

So Microsoft encourages you to use ASP.NET Identity. You don't have to, of course. You can simply select No Authentication and the project will not implement anything for you. It is then up to you to fulfil your membership/login needs.

Not the answer you're looking for? Browse other questions tagged asp.net-mvc or ask your own question.

3
Wrapping REST based Web Service
2
In what situations will Windows-based authentication for my ASP.NET MVC web application fail to allow users from accessing the web application?
7
How to structure a modern web application
10
Entity Framework Entities - Some Data From Web Service - Best Architecture?
5
Authorization and Authentication using multiple types of authentication in MVC
339
Should you write your back-end as an API?
5
Where to put User Interface/Domain Model manipulation logic (transferring data from the view to Domain Model)
2
Onion Architecture, Project Architecting and Authentication
4
Using Active Directory ObjectSid as Primary Key in SQL Server for Data Access via ASP.NET MVC