When is an object of real world a (computational) object in OOP world?

In an OOP design phase strategy,

Any physical/conceptual object of a system can be modeled(considered) as computational object in your OOP designed program based on below two conditions:

First case: That physical/conceptual object of a system must have it's local state and that state changes over time.

To illustrate above two cases, below is the object model diagram and class diagram of coin flipping game. 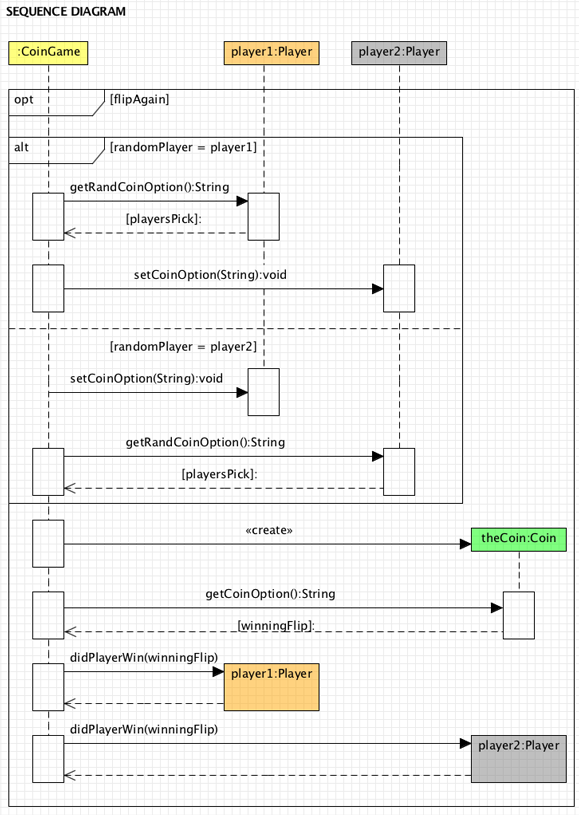 So, class CoinGame does not maintain any local state and has composite relation with Player and Coin, as per below java code.

Here is the complete code in java. Above two cases are valid, when you select objects from real world. Is my understanding correct?

A critical aspect of a programming language is the means it provides for using names to refer to computational objects. We say that the name identifies a variable whose value is the object.

As to your first two assertions, that an object can model changes through time by changing its state and/or passing messages around to other objects, those two assertions are both true.

Is my understanding correct?

No, since immutable objects (like strings in Java or C#, or tuples in Python), do not change their state over time, nevertheless they are perfectly valid examples for (computational) objects in any kind of OOP definition I know. However, those kind of objects can influence the state of other objects through interactions.

Just because objects can have a mutable state, it is not mandatory for them to have one for beeing a "valid object in the OOP sense".

The two cases/conditions, by my reading, clarify which real world and conceptual objects are meaningful candidates to model computational objects after; not whether an object or variable in-code is a computational object. And there's a large degree of subjectivity there -- it's all about whether you, the programmer, can recognize a meaningful state or interaction to model some code after.

A Cup: An attribute of a cup is its fullness, which can vary over time. We can therefore model a "computational" cup object, in that our cup object would store fullness values that can change [over time]. For instance, if we need needed a small, finite container to buffer our consumption of a resource, a cup could be a legitimate model.

Your cousin Ed: Doesn't do nothin'. Just sits, doesn't move. And never bothers nobody. Hence ... no particular value as a computational model.

Not the answer you're looking for? Browse other questions tagged java design object-oriented object-oriented-design class-design or ask your own question.

2
Class design for JSON serialization
84
Do objects in OOP have to represent an entity?
12
Python classes with only one instance: When to create a (single) class instance and when to work with the class instead?
9
How to argue against this “completely public” mindset of business object class design
2
Does Strategy pattern involve modifying every subclass?
4
Identify methods on OOP
2
Object Oriented Game Programming Board Class decision
2
OOP: Interface design when having objects embedded in parent classes