What kind of design diagram is this?

Here is a kata for the Bowling Game problem. Slide 9 (below) shows a design diagram. But its not obvious to me which box is a class and which is a property or method from the makeup of the boxes themselves. 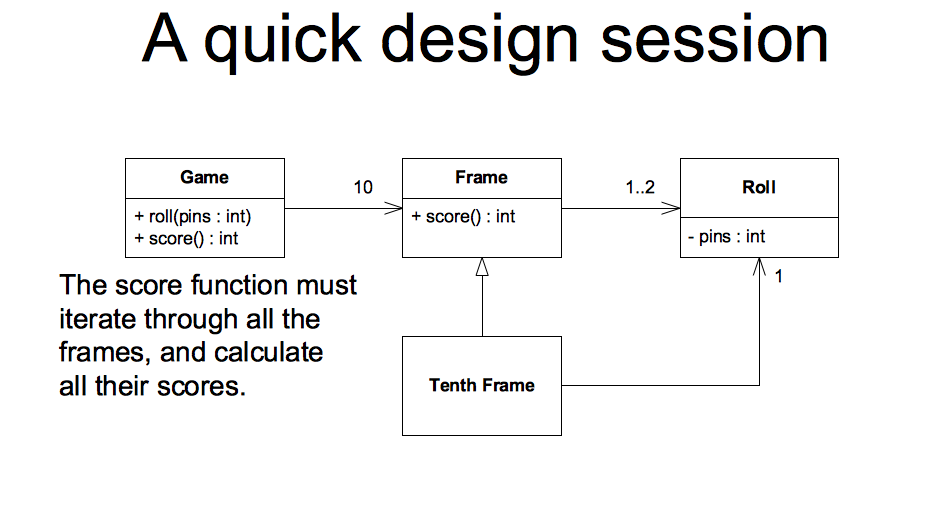 Is this a UML object diagram and if so, isn't there a better way to express class properties as part of the class as a whole? I realise +score(): int is a method but what about 'Frame'?

The Frame box looks the same as the Game box. In the final solution only a Game class is created and Frame is only really used as the number of times to loop within the scoring algorithm

I realise this is quite a specific case but I'm interested in how the diagram is used to model the problem. As illustrated in this question, I immediately think 'Frame' is a class name when looking at the diagram.

The diagram is a UML class diagram, using the notations for classes, associations (with multiplicities), and generalization. Although the notation is using perfectly valid UML, it appears to be in one of the less complete notations that Martin Fowler describes as UML as Notes or UML as Sketch. It's using the symbology of the language correctly, but omitting details to make it easier to read. Such a notation is useful to communicate between people, but wouldn't support something like forward engineering from models to code.

Looking through the slides that you linked to, you are right that the final solution doesn't appear to use anything other than a Game class (at least that I can see looking through the code in the slide deck). When following the principles of Agile Modeling, there would be a Single Source of Information, meaning those models would have likely been thrown away after the code was written and they have outlived their usefulness.

What it looks like happened is that the authors used UML (since it's a familiar and standardized notation) to walk through the problem and explain how it was decomposed. However, as they were writing code, they decided that they didn't need all of the classes to realize the simplest implementation. However, the act of modeling improved their understanding of the problem and the rules associated with it, but may not have driven the implementation.

Yes, it's kind of UML. It seems to me that this diagram shows the number of potential runtime instances in addition to the releations between classes. Kind of entity relationship diagram and class diagram rolled into one picture. Works only if entities and classes have a 1:1 relationship.

Not the answer you're looking for? Browse other questions tagged design uml class-diagram or ask your own question.

9
What does the arrow mean in a Class Diagram?
5
Music Notation Editor - Refactoring view creation logic elsewhere
2
UML diagram for an existing implementation
1
How would you draw this UML class diagram?
4
Does this data processing pipeline design need to be so complex?
5
How to improve this UML class diagram?
1
UML: do I use aggregation or composition in this case?
2
Using common language features only among my working environment, is it a good habit?
1
How to model attribute dependency "inside one class" in UML class diagram?
1
Simple Snake Game in C++