I have a number of data servers that are pushing data to a main server as in this kind of architecture: 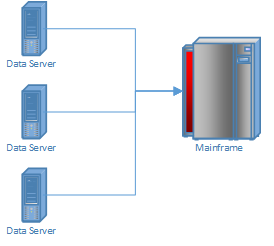 These data points (points for short) are updated randomly from each server. On the server, there are other user-defined data points (called Tags) that are expressions based on one or more points. The server has potentially hundreds of thousands of these Tags.

The server back-end is written in C# and I've decided to use JavaScript to allow the user to define the expressions that make up the Tag values (mainly because the other part of this is a web-based visualization and I only want one scripting language).

I don't want to create a single JavaScript Engine for each Tag since that would be memory intensive. I've selected JInt for the JavaScript Engine (has to be mono-compatible so V8 is out) and I can create variables (Tags) and assign values (Points) but its not thread-safe. So I would have to wait until one Tag is finished updating before starting another. This is a performance bottleneck.

So I thought about creating a pool of Engines and pass out engines as they are available, the Tag locks it while using it and then releases it when it is finished. I'm not sure this is the best approach though because during my testing I've found the single Engine to be about 25% faster (or maybe its my implementation).

How would you approach this problem? I can't delegate the calculations down to the data servers because the expressions may use tags from multiple servers and that would require the servers to talk to each other or a bi-directional exchange with a repository on the main server.

Here is some code if you'd like to look through it:

Minimal Example with No Dependencies

Note about the code: There is a level of indirection here with the use of Variable, this is because the data point "names" are actually GUID's, and a GUID doesn't make a good (or valid) variable name, so they have to be aliased into something that is a valid variable name.

I would go a bit of different route here:

Advantages: Node.js can handle millions of connections simultaniously. It's single threaded but asynchronious.

To take it a level up, spawn as many instances of of Node.js as you need and put them behind a load balancer (I doubt you will need that though).

Not the answer you're looking for? Browse other questions tagged c# javascript or ask your own question.

6
Should jQuery DOM manipulation be avoided in favor of JavaScript template engines?
0
Is sending data to a server via a script tag an outdated paradigm?
2
How Javascript Engines access/lookup property names?
0
Looking for a way to interpolate a base URL that won't conflict with Underscore template code
1
Where to declare a variable and define a function in Javascript?
5
Microservices Architecture separating backend and front end
0
Load files depending on browser or write workarounds within the file?
2
How to update HTML/JS client from PHP server without refresh intervals?