Algorithm for calculating a bullet path to a target with max. 2 ricochets

Sorry for the poor title but I didn't have a better way to phrase it...

So there's this amazing game by Nintendo (yes!) on Wii called WiiPlay. There're 9 minigames in it, and my favorite one is called Tanks!. It's about destroying COM enemy tanks without getting yourself destroyed. Here's a screenshot of a level: 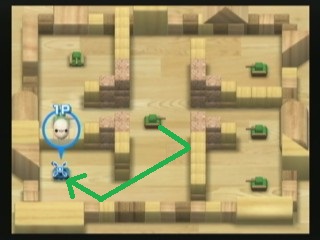 One way to destroy tanks is by firing bullets. There's this lime green enemy tank which fires high-speed bullets that ricochet (against the walls and blocks) twice. You can see how the player tank can get instantly destroyed if it stays at where it is now, as that lime tank in the center can fire a bullet that follows the green path I drew on the image.

As an amateur programmer myself I have been wondering how can the lime tank determine at which direction it should fire at to smite the player tank.

I thought about it myself but didn't came up with any possible algorithm. I'll explain my conclusions in case they inspire someone. Just for simplicity during my explanation, I assume a wall to be any surface against which a bullet can ricochet. An isolated rectangle of blocks thusly form four walls.

I concluded that the 2 points at which the bullet ricochets always either lie on one side of a parallelogram or become opposite vertices of a parallelogram. The firing enemy tank and the player tank it aims are not necessarily the other 2 vertices but definitely lie on the lines colinear to either of the four sides of the parallelogram. Here is an illustration of the 4 possible ways a parallelogram can be formed: 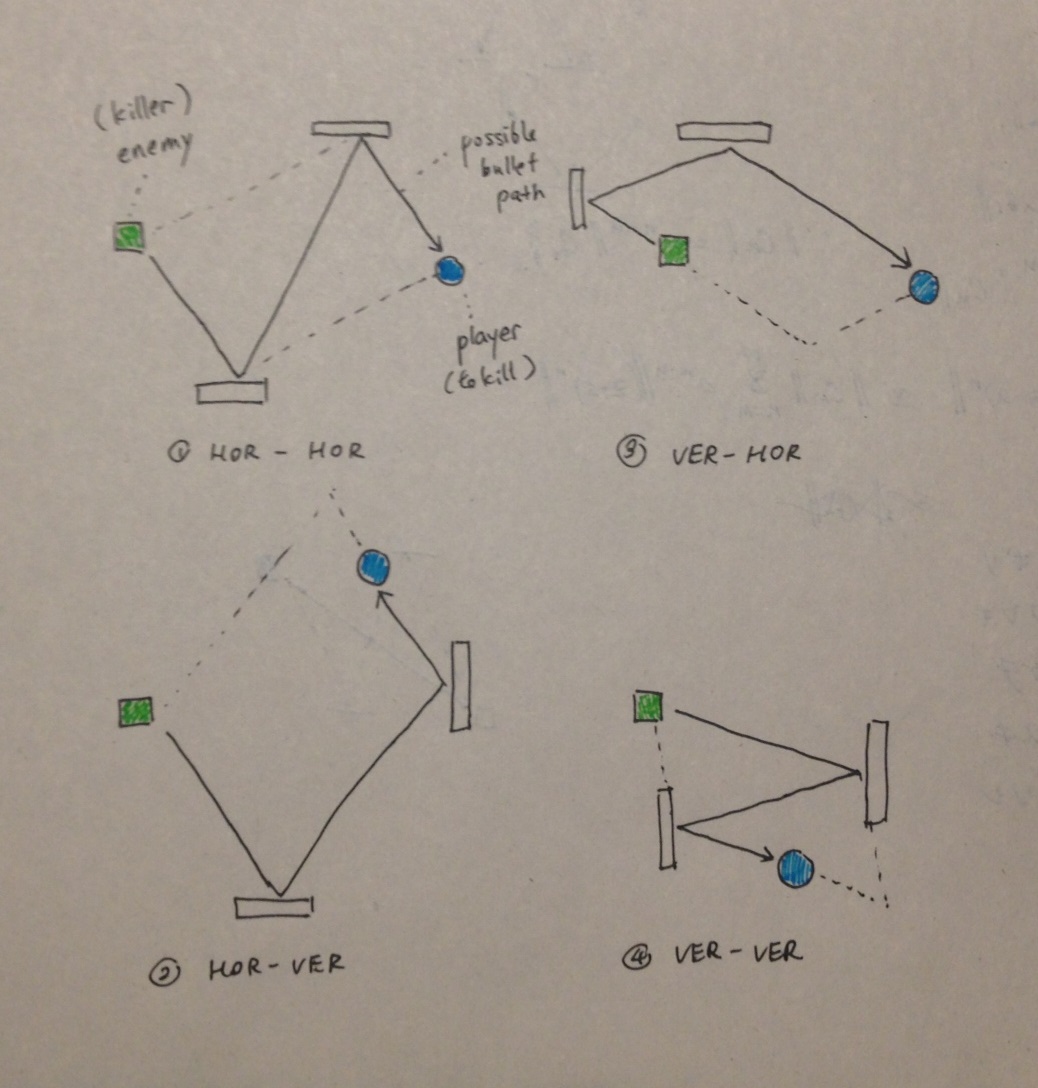 HOR-VER means the bullet first hits a horizontal wall, then it hits a vertical wall.

Also, I'm not sure of the general flow of the algorithm. Does the algorithm take any of the following 2 structures, or maybe I am wrong with both of these?

In my opinion, this algorithm is hard to figure out because:

But Nintendo people made it anyway, so... anybody with an idea?

Given a direct line of sight, the problem is obviously trivial. However, we are dealing with reflection. Properly finding out which parts of the scene can be seen is challenging when implementing reflection as part of a ray tracer, since this might miss some openings. A “binary search” between two promising angles is also not viable: due to the reflections, the actually visible space is not continuous, so the heuristic “if it's to the right of A and to the left of B, there must be a target solution between A and B” is not permissible, and will miss “creative” solutions. I would instead recommend implementing reflection by re-running the tracer from a virtual position – the position where our firing tank seems to be when seen in the mirror:

The advantage is that the mirrored ray is now a straight line originating from the virtual position. I tried to illustrate the technique in the following sketch: 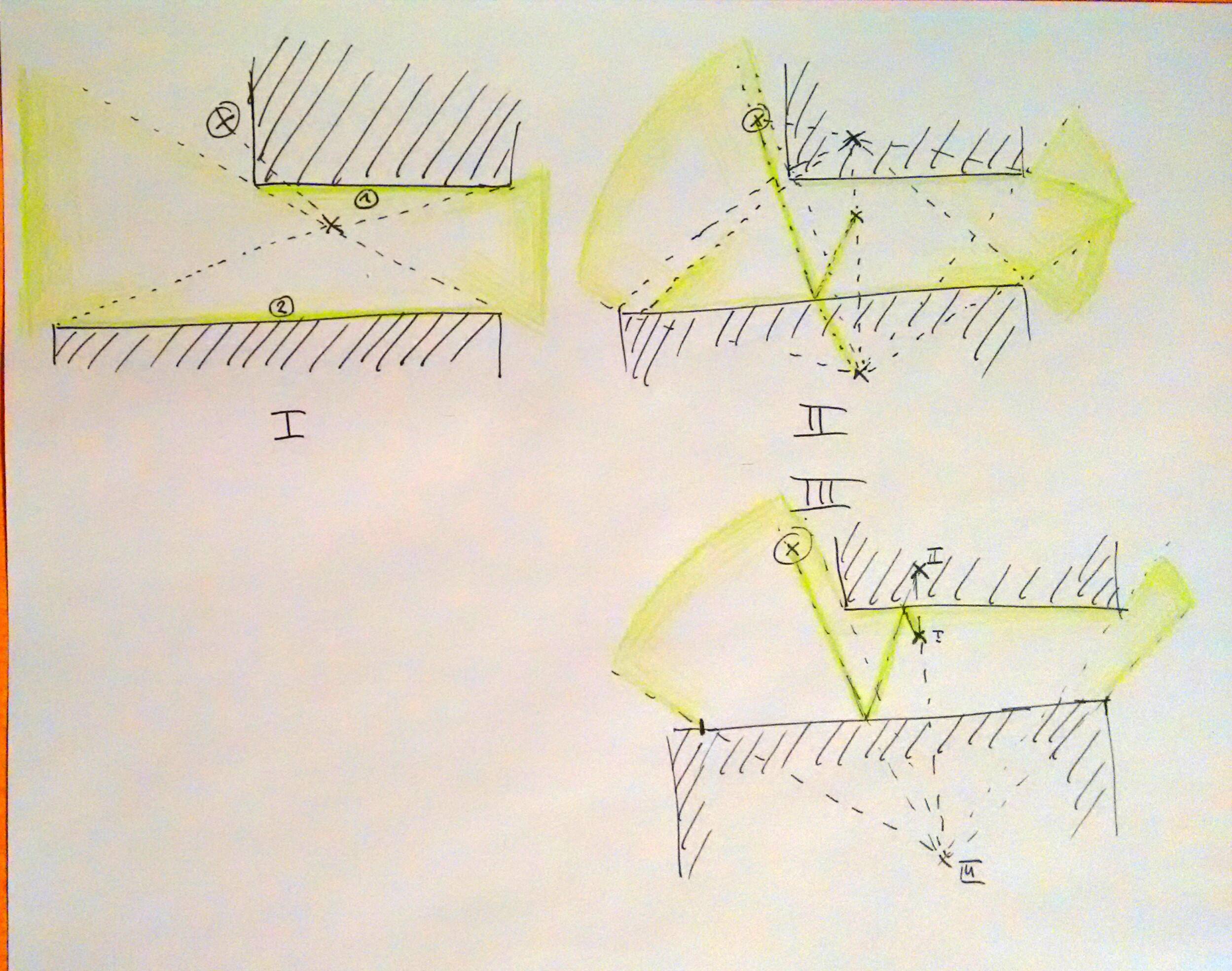 X marks the firing position, (X) the target. The coloured areas are visible.

Once you can figure out which parts of the obstacles are visible (and can therefore be used to reflect the bullet), implementing mirroring via a depth-first search would seem straightforward. To find suitable mirror surfaces, the techniques outlined in Nicky Case's Sight & Light might be used: rather than trying out 360 vectors – which might miss openings, and also is wasteful – we launch rays only to the edges of obstacles. 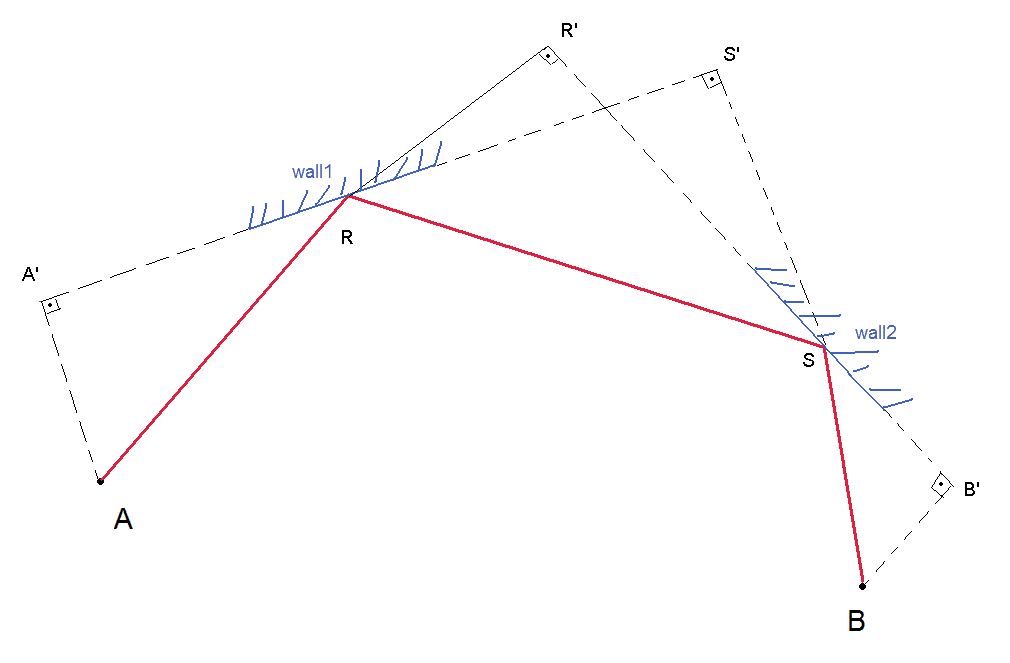 A and B are given (the tanks). You first must list all walls that A can see and a list of all walls B can see. Then you make pairs where the first wall is in the fist list and the second wall is different from the first wall and is in the second list. You need to make this test for all possible pairs of walls (unless you find a way to eliminate candidates). Once you find R and S for a given pair of walls you check

1) if A has direct vision of R

2) if R belongs to the wall1 (the wall is just a segment, no the whole line)

4) if S belongs to wall2 (the wall is just a segment, no the whole line)

To find R and S: Since you know wall1 you can determine the line equation tangent to wall1, since R belongs to the line tangent to wall 1, you have a relation between the 2 coordinates of R (ending up with one degree of freedom for R) Similarly to S (you have a relation between S coordinates since this point belongs to the line tanget to wall2). So now you have 2 degrees of freedom and you must have 2 additional independent equations to determine a solution. One equation is:

the other equation is:

notice that in the above equations A,A',B,B' are know or can be calculated directly. R' and S' are function of the coordinates of R and S and the wall equations. I didn't finish the math so I don't know how the equations will look like.

You can take advantage of the fact that the angle leaving the ricochet must be the same as the angle entering it. For a given horizontal wall with y-coordinate c and two fixed tanks with coordinates (a,b) and (d,e), there is only one angle which satisfies the equation below. 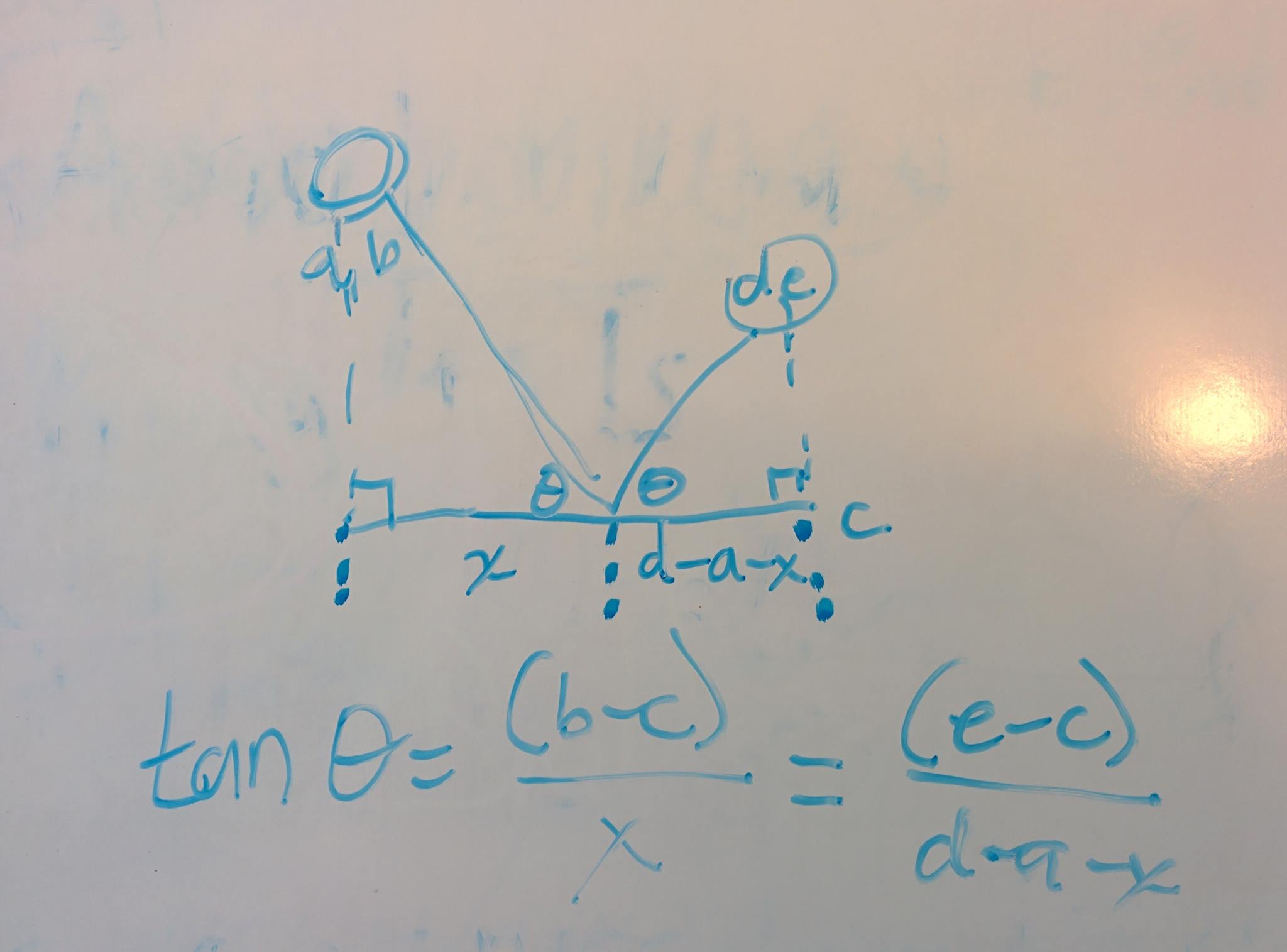 Just solve for x to get the distance along the wall at which you must aim. Two walls works the same. You just have two equations and two unknowns.

You have neat diagrams showing how to direct rays, so I'll leave the details on how to determine a pair of reflecting surfaces.

Let's call the surface that must be hit first surface A, and the second, B.

Try to hit the (visible) edges of B by shooting at A. In other words, determine the points where one would see reflections of the ends of B if looking at the mirror-finished A. This must be easy to do, you have only one reflection point to handle.

Now you know two rays that hit the (visible) edges of B. Let's call them edge rays Compute their reflections off B; they must go somewhere past your target. You can determine if the target lies between them, that is, to the left of one ray but to the right of the other, or vice versa. This is trivial to do using the general equation of the straight line.

If the target is not between the edge rays, you obviously cannot hit it with any intermediate ray; pick another pair of surfaces.

If the target is between the rays, look for the intermediate hitting ray using binary search. You have two firing angles corresponding to the edge rays, your hitting angle lies between them. Provided that your target's angular diameter, as seen from the firing point, is not excessively small, you will need few iterations until you find a direction of a hitting ray. 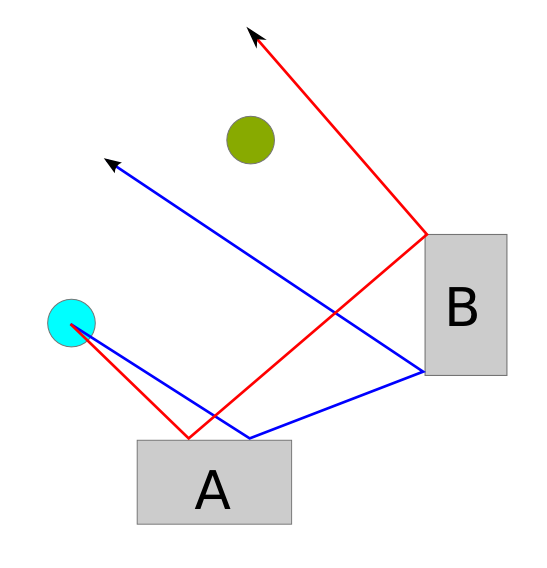 Here the two edge rays are shown in red and blue. Apparently you can find a ray emitted at a smaller angle than the red one but greater that the red one so that that ray will hit the green target.

First off, remember in physics class when you talked about refraction of light? Well your problem can be solved using those principles. The angle of incidence is equal to the angle of reflection. so the enemy tank needs to run through every possible angle for the first bounce so that the second bounce may hit the player. Keep going with the ray tracing idea too. Now, this gets complicated when the player is moving but it should be a good enough idea for you to get started on an algorithm

Not the answer you're looking for? Browse other questions tagged algorithms game-development problem-solving or ask your own question.