As the input, program would get a set of point (x,y), along with the time a certain point was drawn. (suppose on a tablet).

Let's restrict ourselves to simple polygons.

F: (r,fi)->Re which takes each point in (r,fi) space and returns the number of intersecting curves at that point. Interpret the image of F as a surface in 3space, we construct a set E, containing its "peaks".

Problem: When the input is drawn, because of human error, lines are wavy. This causes scattered "peaks". Even when drawing one line, cases occur, where the maximum element of E, poorly approximates the general direction of the drawn line.

My ways of trying to fix it:

Firstly I tried to smooth out the input before the algorithm gets it.

- I tried smoothing it out by gluing Besier curves, I took all the input points, and then treating each two neighbours as the boundary points of a Besier curve, and calculating the missing two. 2n by 2n system. The problem with this is that I should reduce the points for it to have effect.

-Currently I'm writing a Mean curvature flow implementation, to try to use it for smoothing

Two pictures. Black is Before Red is after 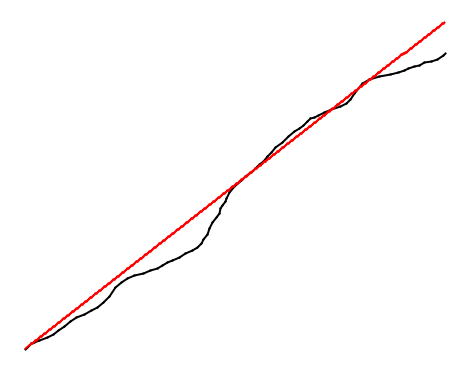 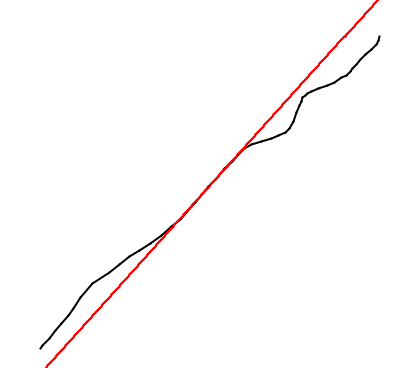 Firstly, please post some images and their corresponding plots from your implementation of Hough transform. Without images and their plots, it is difficult to tell what is going on - especially since there is no source code to critique.

My suspicion is that your understanding of Hough transform may not be correct. When the input is a single point in the (x, y) space (spatial), the resulting Hough transform accumulation should be a sinusoidal graph.

A positive detection of a single line always shows up as a signature "bowtie" shape in the Hough transform space, when rendered as an image where the gray level intensity is proportional to the number of votes received (i.e. the integral). Please refer to the sample plot in the Wikipedia article linked above.

Your attempt to smooth the Hough transform space is on the right track, but the amount of smoothing depends on a lot of factors. It is necessary to make an image plot of the Hough transform plot in order to fine-tune the amount of smoothing needed. It is very likely that the smoothing needs to be performed on a larger window e.g. a Gaussian smooth function with sigma of 5 - 10 pixels is sometimes needed, depending on input characteristics.

You can also compare your implementation's output with that of MATLAB's output or OpenCV's.

Make sure the bins used for Hough Transform accumulation have enough precision to avoid value overflow. Put simply, if the Hough Transform values are stored in "8-bit unsigned integer", it is very likely to overflow. Any other data types should be fine.

One important thing you can do is to skeletonize or erode your wide lines to get narrow ones. Look at imageJ for some implementations of erode/skeletonize. If you do this, then the amount by which the angle of the line can vary will be reduced. This followed by a mild Gaussian blur can help to make your peaks easier to detect.

Not the answer you're looking for? Browse other questions tagged image-processing recognition or ask your own question.