Here's the actual problem I'm working on: I want a way to represent cards in the card game Magic: The Gathering. Most cards in the game are normal-looking cards, but some of them are divided into two parts, each with its own name. Each half of these two-part cards is treated as a card itself. So for clarity, I'll use Card only to refer to something that's either a regular card, or half of a two-part card (in other words, something with only one name). 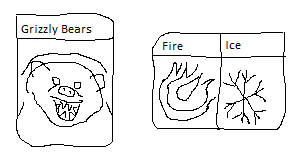 So we have a base type, Card. The purpose of these objects is really just to hold properties of the card. They don't really do anything by themselves.

There are two subclasses of Card, which I'm calling PartialCard (half of a two-part card) and WholeCard (a regular card). PartialCard has two additional methods: PartialCard otherPart() and boolean isFirstPart().

If I have a deck, it should be composed of WholeCards, not Cards, as a Card could be a PartialCard, and that wouldn't make sense. So I want an object that represents a "physical card," that is, something that can represent one WholeCard, or two PartialCards. I'm tentatively calling this type Representative, and Card would have the method getRepresentative(). A Representative would provide almost no direct information on the card(s) it represents, it would only point to it/them. Now, my brilliant/crazy/dumb idea (you decide) is that WholeCard inherits from both Card and Representative. After all, they are cards that represent themselves! WholeCards could implement getRepresentative as return this;.

As for PartialCards, they don't represent themselves, but they have an external Representative that is not a Card, but provides methods for accessing the two PartialCards.

I think this type hierarchy makes sense, but it's complicated. If we think of Cards as "conceptual cards" and Representatives as "physical cards," well, most cards are both! I think you could make an argument that physical cards do in fact contain conceptual cards, and that they're not the same thing, but I would argue that they are.

Because PartialCards and WholeCards are both Cards, and there's usually no good reason to separate them out, I'd normally just be working with Collection<Card>. So sometimes I'd need to cast PartialCards in order to access their additional methods. Right now, I'm using the system described here because I really don't like explicit casts. And like Card, Representative would need be cast to either a WholeCard or Composite, to access the actual Cards they represent.

So just for summary:

Is this insane? I think it actually makes a lot of sense, but I'm honestly not sure.

It seems to me that you should have a class like

I think you could make an argument that physical cards do in fact contain conceptual cards, and that they're not the same thing, but I would argue that they are.

It doesn't matter whether or not you think the the physical and logic card are the same thing. Don't assume that just because they are the same physical object, they should be the same object in your code. What matters is whether adopting that model makes the coder easier to read and write. The fact is, adopting a simpler model where every physical card is treated as a collection of logical card consistently, 100% of time, will result in simpler code.

To be blunt, I think the proposed solution is too restrictive and too contorted and disjointed from the physical reality is models, with little advantage.

I'd suggest one of two alternatives:

Option 1. Treat it as single card, identified as Half A // Half B, like the MTG site lists Wear // Tear. But, permit your Card entity to contain N of each attribute: playable-name, mana cost, type, rarity, text, effects, etc..

Option 2. Not all that dissimilarly from Option 1, model it after the physical reality. You have a Card entity that represents a physical card. And, it's purpose is then to hold N Playable things. Those Playable's can each have a distinct name, mana cost, list of effects, list of abilities, etc.. And your "physical" Card can have its own identifier (or name) that is a compound of each Playable's name, much like the MTG database appears to do.

I think either of these options are pretty close to the physical reality. And, I think that'll be beneficial to anyone who looks at your code. (Like your own self in 6 months.)

The purpose of these objects is really just to hold properties of the card. They don't really do anything by themselves.

This sentence is a sign that there is something wrong in your design: in OOP, each class should have exactly one role, and the lack of behaviour reveals a potential Data Class, which is a bad smell in the code.

After all, they are cards that represent themselves!

IMHO, it sounds a little bit strange, and even a little bit weird. An object of type "Card" should represent a card. Period.

I know nothing about Magic: The gathering, but I guess you want to use your cards in a similar way, whatever their actual structure is: you want to display a string representation, you want to compute an attack value, etc.

For the problem you describe, I would recommend a Composit Design Pattern, despite the fact this DP is typically presented for solving a more general problem:

The elegance of the approach is that a CompositeCard contains two cards, which themselves can be either ConcreteCard or CompositeCard. In your game, leftCard and rightCard will probably systematically be ConcreteCards, but the Design Pattern allows you to design higher level compositions for free if you want. Your card manipulation will not take into account the real type of your cards, and therefore you don't need things such as casting to subclass.

CompositeCard must implement the methods specified in Card, of course, and will do it by taking into account the fact that such a card is made of 2 cards (plus, if you want, something specific to the CompositeCard card itself. For instance, you may want the following implementation:

By doing that, you can use a CompositeCard exactly as you do for any Card, and the specific behaviour is hidden thanks to polymorphism.

If you are sure a CompositeCard will always contain two normal Cards, you can keep the idea, and simply use ConcreateCard as a type for leftCard and rightCard.

Maybe everything is a Card when it's in the deck or the graveyard, and when you play it, you construct a Creature, Land, Enchantment, etc. from one or more Card objects, all of which implement or extend Playable. Then, a composite becomes a single Playable whose constructor takes two partial Cards, and a card with a kicker becomes a Playable whose constructor takes a mana argument. The type reflects what you can do with it (draw, block, dispel, tap) and what can effect it. Or a Playable is just a Card that has to be carefully reverted (losing any bonuses and counters, getting split up) when taken out of play, if it’s really useful to use the same interface to invoke a card and predict what it does.

The visitor pattern is a classic technique for recovering hidden type information. We can use it (a slight variation of it here) here to discern between the two types even when they are stored in higher-abstraction variables.

Let's start with that higher abstraction, a Card interface:

There may be a little more behavior on the Card interface, but most of the property getters move to a new class, CardProperties:

Now we can have a SimpleCard representing a whole card with a single set of properties:

We see how the CardProperties and the yet-to-be-written CardVisitor are starting to fit in. Let's do a CompoundCard to represent a card with two faces:

The CardVisitor starts to emerge. Let's try to write that interface now:

(This is a first version of the interface for now. We can make improvements, which will be discussed later.)

We've now fleshed out all the parts. We now just need to put them together:

The runtime will handle the dispatch to the correct version of the #visit method through polymorphism rather than trying to break it.

Rather than use an anonymous class, you can even promote the CardVisitor to an inner class or even a full class if the behavior is reusable or if you want the ability to swap behavior at runtime.

We can use the classes as they are now, but there are some improvements we can make to the CardVisitor interface. For example, there may come a time when Cards can have three or four or five faces. Rather than adding new methods to implement, we could just have the second method take and array instead of two parameters. This makes sense if multi-faced cards are treated differently, but the number of faces above one are all treated similarly.

We could also convert CardVisitor to an abstract class instead of an interface, and have empty implementations for all the methods. This allows us to implement only the behaviors we are interested in (maybe we are only interested in single-faced Cards). We can also add new methods without forcing every existing class to implement those methods or fail to compile.

Not the answer you're looking for? Browse other questions tagged java object-oriented-design hierarchy or ask your own question.

33
Is it okay to have objects that cast themselves, even if it pollutes the API of their subclasses?
8
Are trivial protected getters blatant overkill?

9
What is the difference between self-types and trait inheritance in Scala?
45
How necessary is it to follow defensive programming practices for code that will never be made publicly available?
3
An alternative to having fields that might not be used in a class
1
Determining a class structure
2
How can my genetic algorithm accept an arbitrary number of bases of any type, without accepting a List?
1
Need help designing a card game
0
Same Interface for Classes with some common attributes
4
How to avoid code duplication while extending two umodifiable classes
1
Is it wrong to extend an inner static class in java? (Builder pattern)