How could one compare the shape of abstract syntax trees of similar source code programs (C, C++, Go, or anything compiled with GCC...)?

I guess that plagiarism detection on source code would use such techniques, but I have no idea of how would that be called...

For example, unification could be used to compare AST, but it gives only a boolean answer. I'm seeking for some technique giving some numerical "distance", or some kind of numerical vectors (to be later feed up e.g. to machine learning or classification algorithms, or some other big data thing).

Any references to big data or machine learning approaches on large set of source code is welcome too.

(Sorry for such a broad or fuzzy question, I don't know what terminology to use)

I don't simply want to compare two ASTs or programs. I want to process a large set of programs (e.g. half of a Debian distribution source code) and find inside it similar routines. I already have MELT to work on GCC internal representations (Gimple) and I want to leverage above that, hence store several metrics (which ones? cyclomatic complexity is probably not enough) in e.g. some database and compare & process them...

Addenda: Found about the MOSS system & paper, but it does not seem to care about syntactic shape at all. Also looking into tree edit distance.

Found also (thanks to Jérémie Salvucci) Michel Chilowicz's PhD thesis (in French, november 2010) on Looking for Similarity in Source Code

One approach would be to compile the source to XML and then look at how different the two bits of source are. For example, in the Java world, the static analysis tool pmd does this as its approach to looking for things to warn about.

And that point you would be comparing code by saying "the difference between this code and that code is that this name is different." As the above is actually xml, this could be done with any number of xml comparison tools that exist. Or if you were after a number, one could apply a tree edit distance algorithm on it (related SO question).

Another approach is to look at the 'signature' of the code shape. The Signature Survey was done by Ward Cunningham 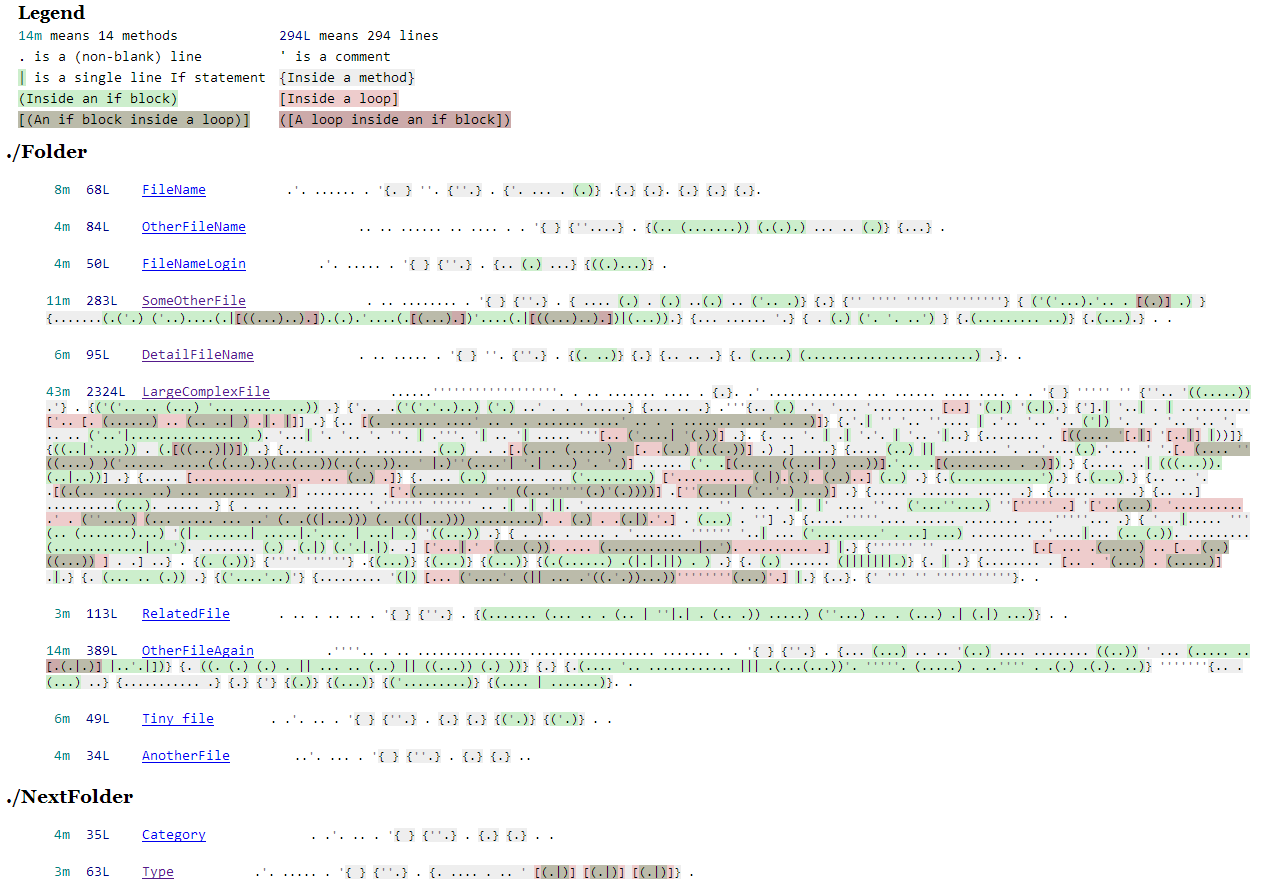 That legend is a bit hard to read:

Comparing two sets of code then is looking at the edit distance between two strings with a very limited language.

Not the answer you're looking for? Browse other questions tagged parsing syntax machine-learning big-data or ask your own question.

1
Does syntax matters for a (Lispy) Domain Specific Language (MELT, inside GCC)?
3
About AST construction in LL1 non recursive parser
4
Traversing an AST using Visitors
2
Writing a parser on top of an XML-based AST: am i doing it right?
1
Passing context around AST nodes
8
Perform crossover operation on AST in genetic programming
0
AST design: Call is both expression and statement?
0
Generating an AST directly vs. converting from a CST
0
Does compiler AST include functions and classes?