Mercurial Branching from a branch

We are in a situation where the customer has requested an urgent deployment of the current features we are working on. These features are being developed in a mercurial branch named 'sprint 1' for arguments sake.

Would I just start a 'sprint 2' branch from the tip of the 'sprint 1' branch as soon as we go in to UAT?

The flow of the system of old was basically everyone commits to the master / main / trunk / default or whatever, and at some point something is built from a specific revision. This works well for small projects, but starts to have difficulty (as you noticed) when you start trying to go in different directions at the same time.

So, you branched for the 'sprint 1' for the role of 'bug fixes and stabilization of issues in sprint 1'. And now you've got sprint 2 that is coming up... and where should that branch be made?

Before going too far, lets delve a bit into philosophy of version control.

Each branch has one or more roles and a policy that is determined when it is branched.

Well, I didn't name them. I stole borrowed them from one of my variate documents on branching: Advanced SCM Branching Strategies

When you are doing the 'everything on master', master has all these roles. And thats ok.

The idea of a policy comes from Branching Patterns for Parallel Software Development and the policy branch. This suggests if the policy of the branch needs to change to facilitate work there should be a new branch. For example, if the policy on /trunk is "it must build successfully at all times" and in order to do some development, some work in progress check-ins are needed, that is a branch based on a change of policy.

Whenever one of those roles changes, or you need a subset of the roles, merge and or branch.

You've branched for 'sprint 1'. This has the role of development and packaging. Thats ok. But it isn't mainline. And that is where all branches should have as a parent or grand parent (or great grand parent) and where all code should eventually end up.

Branching from 'sprint 1' to 'sprint 2' means that the code for 'sprint 1' didn't make it back into the mainline. It should.

There's a better way of doing this

Back in 2010, there was a blog post about a model for git branching that tried to put some order into the branches. It was A successful Git branching model and has come to be known as 'git flow' 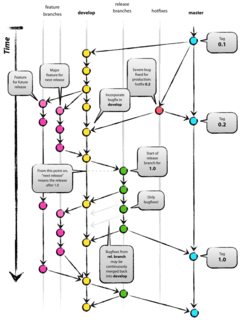 The 'master' branch is the one that git users tend to have as the mainline in many non-git flow cases. Its not here. Master is the tagged releases.

The mainline is the yellow one - develop. All branches eventually merge to develop.

Your sprint would be one or more feature branches (thats one way of looking at it) and once the features in it get merged to develop, a release branch is made from develop. That branch has the role of packaging - and the bug fixes are done on it and moved out to the master tagged releases and then back into develop - the mainline.

And wile thats all and good, you're using hg. So, here's hg flow.

It will impose a bit more structure on how you branch. Thats a good thing. You should be able to look at a branch and be able to figure out what goes in it, what doesn't go in it, where it is in the release cycle and work from there.

The key thing is to consider the different roles for each branch so that a developer knows what should and what should not go into any given branch. It will save you a lot of grief down the road by being able to reason about the structure of the branches.

Functionally mercurial will love as many heads to your repo as you can give it, even without using unique branch names -- you can use multiple anonymous heads for fun and profit at times.

Now, from a code and data management perspective you have to take a few things into consideration. Functionally you really don't want a lot of divergence between the sprints.

There is no reason not to just branch off of the sprint branch.

Not the answer you're looking for? Browse other questions tagged version-control branching mercurial or ask your own question.

8
Mercurial branch or rebase?
3
Release Management Tools with DVCS (Mercurial)
12
Stopping developers committing to the wrong branch on DVCS
16
What's the most effective way to share code between .NET applications?
3
Does cherry-pick just pull changes into the current working tree as uncommitted changes?
17
Introducing a version control branching policy to a small team
2
"Party on my branch" workflow support in mercurial
13
Git branching from a feature branch to work on a subfeature
0
Need a Git branching how-to