I would like to understand what would be the optimal method of finding minimum tree coverage of tree nodes. Let me explain.

I have a self-referencing structure that represents a tree, with a limited depth of X. 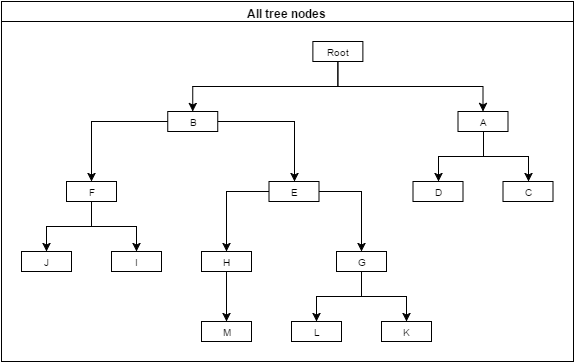 Nodes in the tree can be logically "selected". From the application perspective, it means that user would like to have some aggregate information about the selection. 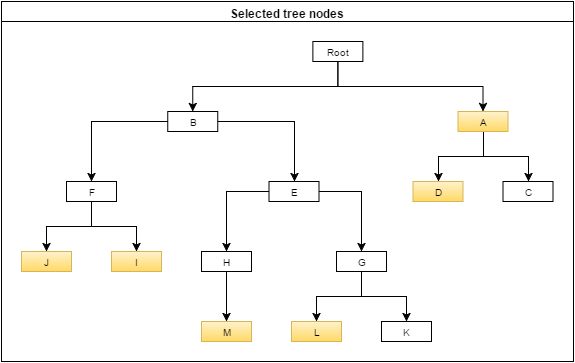 What I would like to do is to be able to restructure the users selection in order to pick the minimum set of nodes that cover the entire selection.

After that, nothing can be restructured further - algorithm stops and I should get the following selection. 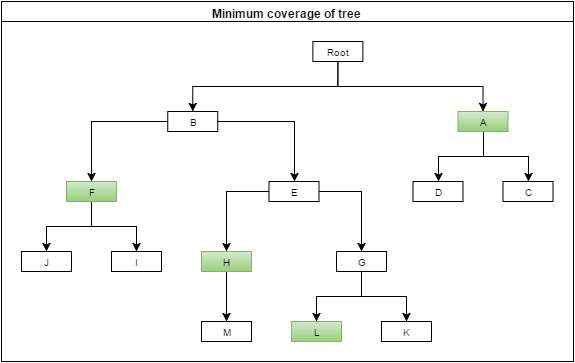 First, I don't know if "minimum coverage" is the good name. Second, I can't find any better phrase, so Google is not my best friend here.

Another thing to note is that the tree itself can be stored:

I have been thinking a lot about this problem, and there might be a solution that I have to analyse.

Following can be introduced:

I'm curious whether this algorithm already exists as an implementation somewhere. It's behavior wouldn't obviously be worse than O(log(n)), right? Of course, if it doesn't lack something in the logic.

The effect you want can be achieved with a single pass over the tree, using a depth-first iteration.

When visiting a node, you perform two conditional actions

In your example, these tests let the selection of the nodes I, J and M bubble up to F and H respectively and the second test causes node D to be deselected.

This algorithm does not make any assumptions on how the tree is stored, but only assumes that you can reach each node and that you can process the children of node X before node X itself.

This is generally more efficient, because on each selection you usually only have to walk a small part of the tree.

Not the answer you're looking for? Browse other questions tagged algorithms trees or ask your own question.

0
Adding ordered nodes to tree in arbitrary order
4
Inexpensive generation of hierarchical unique IDs
1
Efficient Summary calculation method or approach?
3
Processing every leaf under a node in a tree efficiently
6
Which data structures and algorithms should I consider for a directed rooted tree that has high churn?
4
Data structures and algorithms for a directed rooted tree with inherited properties?
3
Algorithm to go from infix notation to a tree
3
What strategy should I follow to draw a forest of trees represented by an array
0
Parsing tree with many node types