I'm working on architecting a somewhat enterprise-level solution and have a question about how to best handle the persistence details.

My overall setup is that there's a core set of business logic/objects, as well as a number of isolated components that rely on the core logic, but never on other components. Sitting on top of this component/core business logic layer is application logic and presentation stuff. Underneath these two layers is infrastructure and persistence. 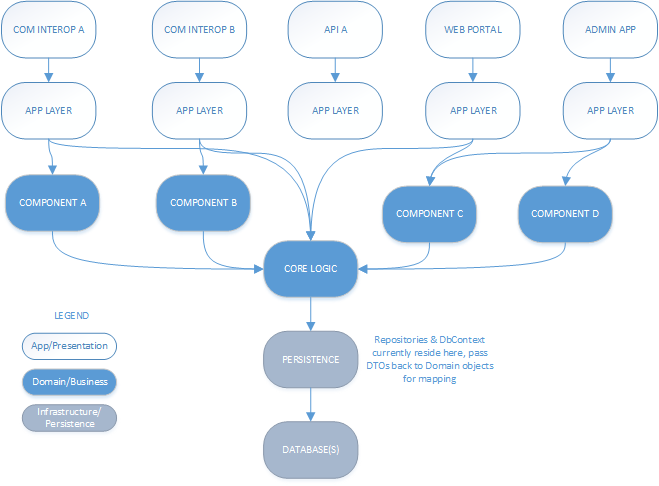 note: currently I'm working on the Core specifically, haven't gotten into Components yet

Currently (and incorrectly, I suspect), my Core project has a reference to the Persistence project, and a Core model (Orders, let's say) has an IOrderRepository field. When the Order is instantiated, I can pull up the info, I can save it, etc.

1) My core domain objects are not following SRP because they essentially have persistence details attached to them (despite those details being interface details rather than implementation details, it's still there).

2) Upon reading a good article on managing EF's DbContext (which can be considered in a more generic context form than EF specifically) (ref: http://mehdi.me/ambient-dbcontext-in-ef6/) - I've realized that it makes little sense to loading a persistence context when a domain object is loaded, because it's not at all representative to the context in which the objects are used (e.g., the objects could be loaded under any number of contexts) (note also that I haven't forgotten about Aggregates, but not included here for simplicity because the end result is the same, I think).

It "feels" better to me that the persistence context (and thus the DbContext and thus the repositories) should be handled under the general context of any specific business task rather than simply on a business object, which, in itself, has no true context despite the fact they do encapsulate various behaviors (is this statement correct??).

What I Can't Seem to Grasp:

How do I set this up so the persistence context is closer to the context in which it's used (which feels right, but correct me if I'm wrong), while at the same time fully separating it from the domain objects so those latter maintain their required SRP (e.g., so I don't have Save() and Load() methods on the domain objects, no matter how well abstracted away they are)?

I appreciate any input on how to best keep this from turning into a tangled-up mess. Thanks

Taking a few hints from the following two posts (apparently SE's search abilities are better than mine...), I've come up with something that seems to fit well.

Where to validate domain model rules that depend on database content?

So, the application layers will not interact directly with the domain object POCOs themselves, but will instead generate them through these providers.

Having the providers be per-application section allows me to implement the details as required per context (e.g., application A might only need to load X part of the object graph, where application B might need X and Y, etc.)

The diagram below isn't the prettiest but describes the layout well enough: 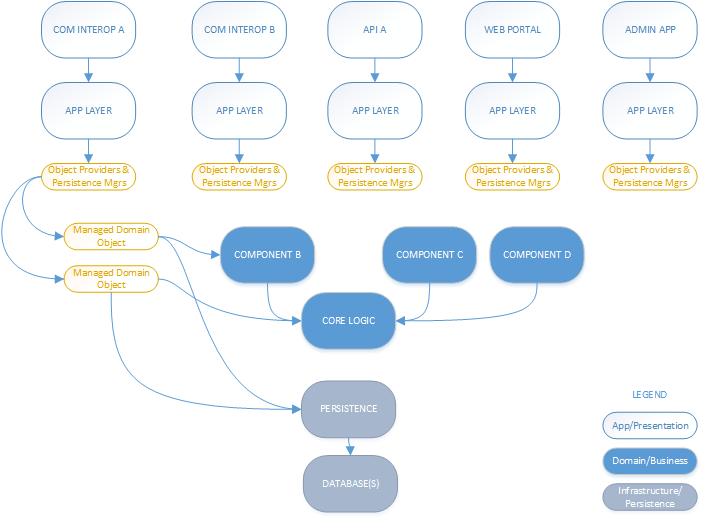 This likely isn't 100% perfect: I'm sure there's further details I'll have to smooth out, but from a 30kft view, it does seem much better.

With that said, I'm still open to exploring other ideas, so if you have one feel free to spit it out. Thanks

Not the answer you're looking for? Browse other questions tagged architecture domain-driven-design enterprise-architecture persistence or ask your own question.

12
Are Persistence-Ignorant objects able to implement lazy loading?
11
Where to validate domain model rules that depend on database content?

12
Are Persistence-Ignorant objects able to implement lazy loading?
3
Recovering an anemic domain model into a multitier architecture
5
Do we achieve 100% Persistence Ignorance solution if we're not using ORM's POCO objects to model the Domain?
11
Should I use the repository in the Domain Object or push the Domain Object back to the Service Layer?
5
Does using the strategy pattern for persistence methods make it "okay" to include CRUD methods in a business object?
2
Persisting domain state without exposing underlying provider(s)
16
Is domain/persistence model isolation usually this awkward?
4
Robust architecture with EF Core
3
DataAccess Layer coupling with Domain Layer
6
Avoiding Repository pattern - implementing Onion Architecture with DbContext only