Why is Array.prototype designed to be a fully functional array?

In the below visualisation, 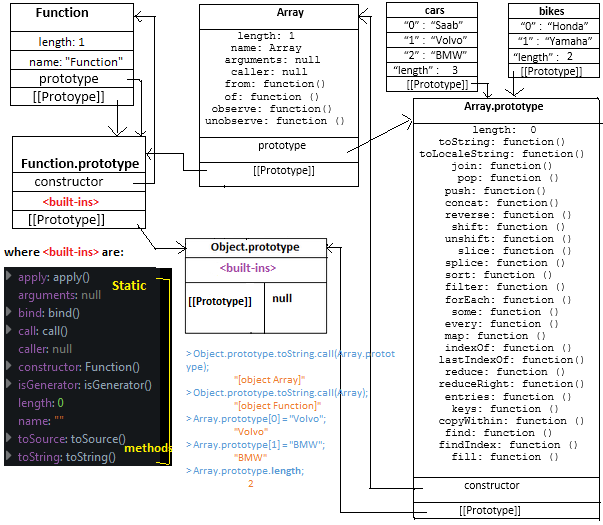 There are two array objects(cars & bikes) that are created with below syntax,

whose [[Class]] property value is Array.

In addition, we also have Array.prototype, which is fully functional array, as shown below,

Generally, When you put something on the prototype, every instance of the object shares the same properties.

With length property as member, What is the idea behind Array.prototype being fully functional array?

The Array-prototype is itself a fully functional array, because it need to contain all the functionality which is necessary for an object to function as an array. The Array-instances inherit all their functionality through the prototype.

According to the spec:

The Array prototype object is itself an array; its [[Class]] is "Array", and it has a length property (whose initial value is +0) and the special [[DefineOwnProperty]] internal method described in 15.4.5.1.

Not the answer you're looking for? Browse other questions tagged javascript array prototyping ecmascript or ask your own question.

7
Should an application be designed without prototyping first?
6
why are both index[array] and array[index] valid in C?
2
Why a hashtable? Why not just a non-hashed associative array?
1
memory management of multi-dimensional array
19
Are generator functions valid in functional programming?