How to solve circular dependency?

I have three classes that are circular dependant to each other:

TestExecuter execute requests of TestScenario and save a report file using ReportGenerator class. So:

Can't figure out how to remove thoses dependencies.

EDIT: in response to an answer, more details about my TestScenario class:

An example of the xml file to be generated in case of a scenario containing two tests:

Technically, you can resolve any cyclic dependency by using interfaces, as shown in the other answers. However, I recommend to rethink your design. I think it is not unlikely you can avoid the need for additional interfaces completely, while your design becomes even simpler.

I guess it is not necessary for a ReportGenerator to depend on a TestScenario directly. TestScenario seems to have two responsibilites: it is used for test execution, and it works also as a container for the results. This is a violation of the SRP. Interestingly, by resolving that violation, you will get rid of the cyclic dependency as well.

So instead of letting the report generator grab data from the test scenario, pass the data explicitly by using some value object. That means, replace

The method getReportData needs to have a return type like ReportData, a value object which works as a container for the data to be displayed in the report. insertDataToDisplay is a method which expects an object of exactly that type.

This way, ReportGenerator and TestScenario will both depend on ReportData, which depends on nothing else, and the first two classes do not depend on each other any more.

And finally, a third approach: TestExecuter has too many responsibilities, too. It is responsible for executing tests as well as for providing a TestScenario to a ReportGenerator. Put these two responsibilities into two separate classes, and your cyclic dependency will vanish again.

There may be more variants to approach your problem, but I hope you get the general idea: your core problem are classes with too many responsibilities. Solve that problem, and you will get rid of the cyclic dependency automatically.

By using interfaces you can solve the circular dependency. 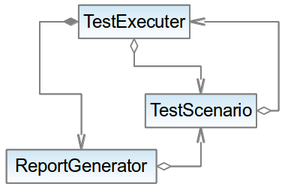 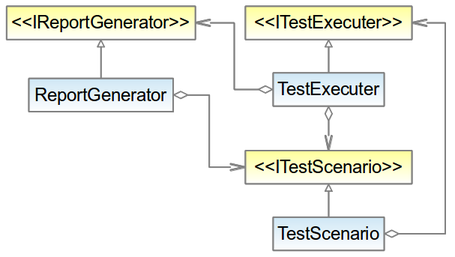 Ideally you'd be defining interfaces for all your classes and expressing dependencies through them, but this is the smallest change which will solve your problem.

Not the answer you're looking for? Browse other questions tagged design object-oriented-design circular-dependency dependency-analysis or ask your own question.